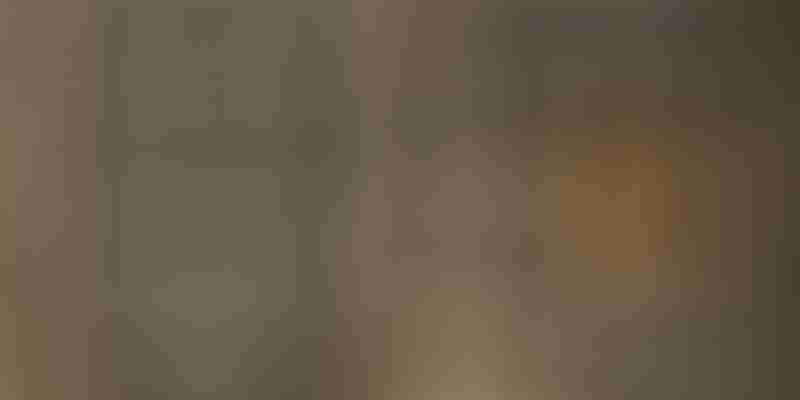 Ruins of Wo’Mataja
An Aventyr Adventure for 4-6 characters of levels 2-3
Jonathan G. Nelson

Wo’Mataja was once a flourishing Chonian village in the foothills of the Baevonian Mountains but was destroyed and subsequently abandoned many years ago. No one knows the initial cause of the destruction but it is surmised that either orc hordes or Baevoninan troops from the mountains laid waste to the once peaceful village. 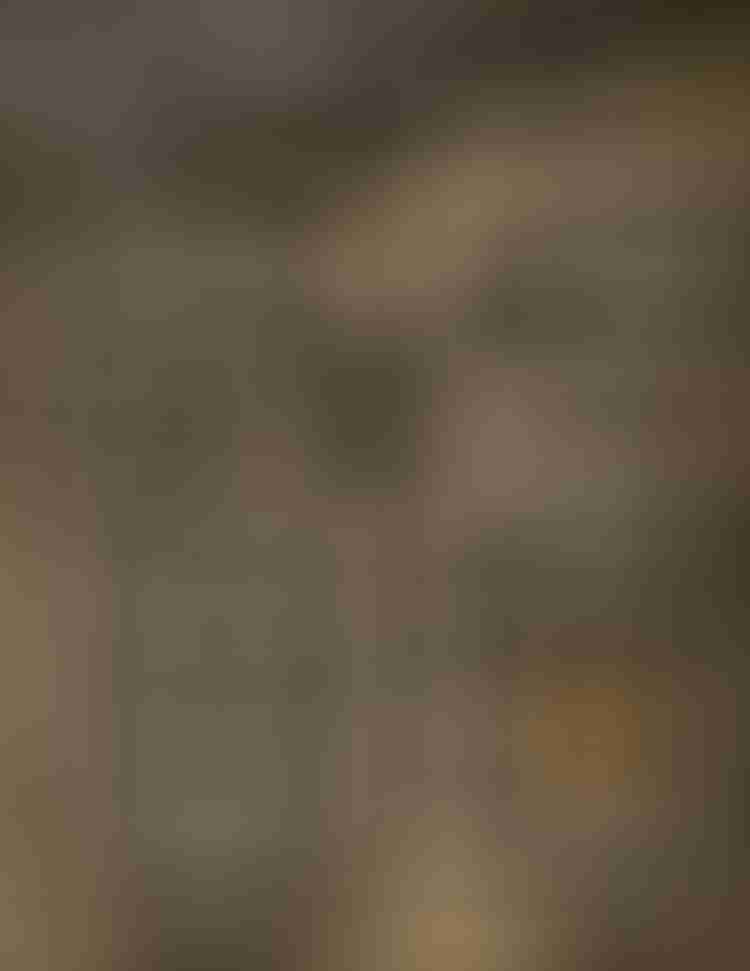 It is important to discern whether the party reaches Wo’Mataja during the day or at night due to the various combatants within and their chance of hearing or spotting the party (and vice versa) as the adventurers progress through the ruins. Orcs have darkvision and are at a considerable advantage at night but detest the daylight and prefer to sleep during those hours. 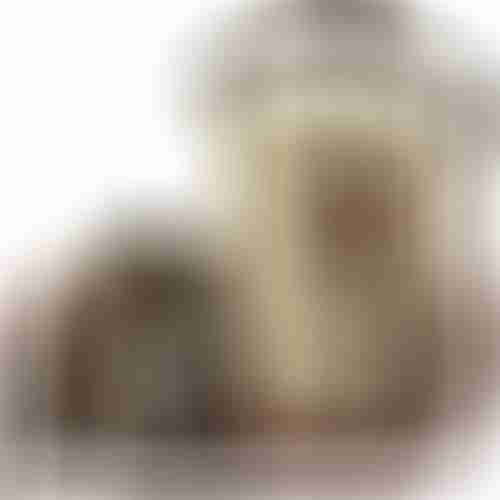 Orc raiders, preying on nomads traveling to and from Lake Chonia, have holed up in Wo’Mataja to weather the impending sandstorm.

If the adventurers are spotted, an orc will blow a warhorn in an attempt to summon all orcs in the area to battle. The sandstorm prevents auditory effects from traveling far and there is only 30% chance that any orc group hears the call and can actually tell what direction it is coming from.

A sandstorm is bearing down on the village ruins and will arrive soon. Details are listed in the Area 1. description.
Note: Levels of sickness are cumulative and require 1 full rest per level to remove.

A storm is bearing down on Wo’Mataja and with it comes dust, sand, and debris, pulled from the parched soil of the Lake Chonian scrub plains. In 4d4+4 rounds, characters caught outside, in the open, must succeed at a DC 12 Constitution save or receive 1 level of sandstorm sickness. For every 1d4+1 rounds exposed to the storm, the save DC increases by 1 and the character(s) must roll again. Characters wearing a thick cloth over their noses and mouths receive an additional 2d4 rounds before making saves. Adventurers who are Chonian make these saves with advantage.

2. Partial Cover from the Storm

Tucking back between these ruined buildings provides adequate cover from the storm for 2d4 rounds. There is a cumulative 25% chance per round the orcs in Area 3 spot the adventurers and sound their warhorn before attacking. One of the four orcs in Area 8 has a 10% chance of wandering far enough to spot one of the characters (passive Perception 10). 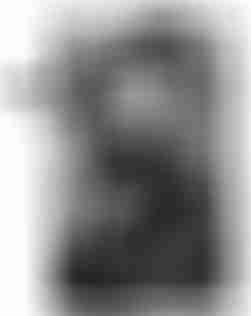 Four orcs celebrate a recent raid on the Chonians by having a bonfire and digging through a number of crates to see what spoils they find. After crates are emptied, the orcs crush them and toss them into the fire. They are being so loud, there’s only a 10% cumulative chance per round the adventurers are seen or heard (unless being overtly loud or otherwise obvious). If the characters are spotted, three of the orcs attack immediately while the fourth sounds her warhorn.

Any character succeeding on a DC 18 Wisdom (Perception) check spots something strange at the bottom of one of the crates, a subsequent successful DC 16 Intelligence (Investigation) check reveals a hidden compartment containing a ring of the nomad.

Ring of the Nomad

While wearing this ring, you are immune to all sandstorm effects. Camels and Chonian horses you encounter are affected as if you cast the animal friendship spell.

If nighttime, two orcs rest against a wall here, 50% chance playing dice and talking loudly, 50% chance asleep. If daytime, these orcs are in Area 6, guarding the priestess.

5. Rabble in the Rubble

If nighttime, an orcish archer (DEX 16, longbow +5 to hit) hides (Stealth 14) behind a small pile of rubble, keeping watch to the east. She will surprise sneak attack the first non-orc she sees then sound her warhorn as a bonus action, automatically drawing the attention of the orcs in Areas 4, 6.
If daytime, she sleeps alongside the priestess in Area 6.

If nighttime, a black sun priestess performs an ancient ritual in this room, sacrificing a Chonian nomad she found on the way in. His blood spills across the floor as she chants and prays to her heinous deity. If a warhorn is sounded in Areas 4, 5 she will finish her ritual (1d4+3 rounds), then respond to the call. If the ritual is completed, the black sun priestess receives advantage on her first two actions. If characters approach the orc priestess in Area 6, and she hears them (passive Perception 12), she will stop the ritual and turn to attack.
If daytime, the priestess and archer are asleep in this room but the two orcs from Area 4 are here, keeping watch over them.

7. Debris of Days Past

This room is littered with debris of all types: broken beds, tables, and chairs, shattered oil lamps, rotted paper and clothing, and many other items one would find in a Chonian home. There is a 5% chance, when searching with a successful DC 20 Investigation (Intelligence) check, that one will find a useful item.

This massive well once tapped into an Underworld river but the river has since shifted paths, causing this well to run dry, bringing about the end of Wo’Mataja. Now, strange creatures of the Underworld such as ahooling, dvergr, drow and svirfneblin can be found down this deep hole into the depths of the earth. There is a 20% chance two giant bats and three swarms of bats will emerge from this hole and attack anyone (including orcs) within the vicinity.
Four orcs take cover from the sandstorm behind the right side of this massive dry well. If the adventurers approach within 25 ft of the orcs’ location, there is a chance they are spotted (25% daytime/75% nighttime).

Moving into this area exposes characters to the full onslaught of the sandstorm as detailed previously.

These stables are in surprisingly good shape and currently protect two camels and four riding horses from the sandstorm. There are many saddles and riding accoutrements here, one of which is a Chonian riding saddle.

When riding a horse with this saddle your overland travel speed is doubled.

Once per day, for 1d4+1 rounds, you may double your movement and make attacks from horseback with advantage.

This room is full of mold-covered debris which erupt if touched. Characters must succeed on a DC 15 Constitution save every round or suffer 1d4 damage per round for 2d4+4 rounds or until they leave the structure. With a successful DC 20 Wisdom (Perception) check a strange looking amulet is spotted amongst the debris, it can be recovered with a successful DC 10 Strength (Athletics) check to move debris (which triggers more mold spores). The amulet is magical (but the magic is fading) and when worn grants the wearer 10 temporary HP (but only once).

This structure, surprisingly, has remained mostly untouched over the years. A bed is in one corner, now home to a rat swarm. A small food preparation area has enough preserved food to feed two people for a day. There is a desk in another corner with one drawer containing ink, a quill, some papyrus, and a journal written by a Chonian named Woy’Chan.
Woy’Chan’s journal details the history of the Chonians that once lived here and reveals the dry well as the reason for the abandonment of the settlement. It also describes the potential threat of orc hordes and Baevonians but contains no mention of actual encounters. The desk also contains small silver Chonian wedding ring decorated with horses and arrows and set with a small, rare red ruby worth 100 gp or 200-500 to a Chonian.

This was once a large warehouse used for storing crates, barrels, and other containers capable of holding preserved food. Most of the food has been pilfered away. Two giant spiders and a giant wolf spider are using the lure of the remaining foodstuffs to capture hapless victims who now hang, upside down, as emaciated corpses, from the webs above. The spiders will creep about in the shadows, waiting for the optimal opportunity to strike from behind (or above).

14. Statue of the Ancients

A massive, 20-foot-tall stone statue depicting a bucking stallion and tribal warrior stands here. It has been worn down over the years and large chunks of the stone now lay at the foot of the once-great monument to an ancient hero or long-since-dead deity. Some writing at the base says “Although lower than a fence and thinner than a rail, it can still be used to hold a horse, hooves mane and tail” in Chonian. Those who answer with “stake” or another answer deemed suitable by the GM to the riddle are granted the following boons: immunity to the sandstorm for 24 hours, the ability to go without eating or drinking for 72 hours. 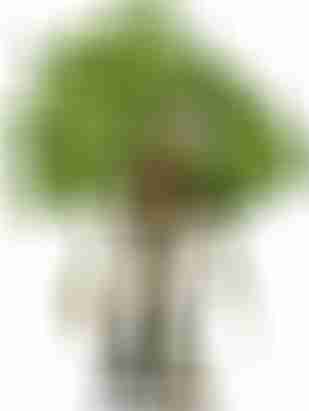 15. Base of the Baevonian Mountains

Climbing these dangerous cliffs requires three successful DC 16 Strength (Athletics) checks. If the first check fails, the character falls for 1d6 bludgeoning damage, the second 2d6, the third 3d6. Once to a stable landing, the climber will notice the branches of nearby trees, growing out of the cliffside, moving. This is a treant named Meewin who has lived here for over 300 years and has knowledge in the form of bits and pieces of what once happened here in the Chonian village of Wo’Mataja. Meewin seeks only to keep to himself but will attack anyone harming him or any of the plants living along this cliff and mountainside within a 1-mile-stretch originating from this point.