The Deck of Miraculous Luck

Many of us have seen it: dumb luck—an event that can only be attributed to a miraculous stroke of serendipity that manifests (almost as if by magic) appearing in the right place at the right time. Some call it fate; others call it the work of the gods. Regardless of the label applied to them, these improbable moments do happen and they can have a tremendous effect on those privy to luck’s sweet embrace.

The Deck of Miraculous Luck consists of 30 cards, each presenting a different lucky effect that simulates those unexpected miraculous moments for player characters. As a meta-mechanic, the deck can also serve as a perfect alternate reward system, providing incentive to players to strive for exceptional endeavors.

A GM should use the deck sparingly. Many of the effects are quite powerful and if too freely distributed, could run the risk of unbalancing the intended challenge of the game.

When looking to reward a player for exceptional role-playing, solving a particularly complex puzzle, or completing a difficult quest with their character, the GM may allow that player to draw from the deck, reaping the benefits associated with that card. Every card is designed to be a boon, and there are no inherently negative effects included. 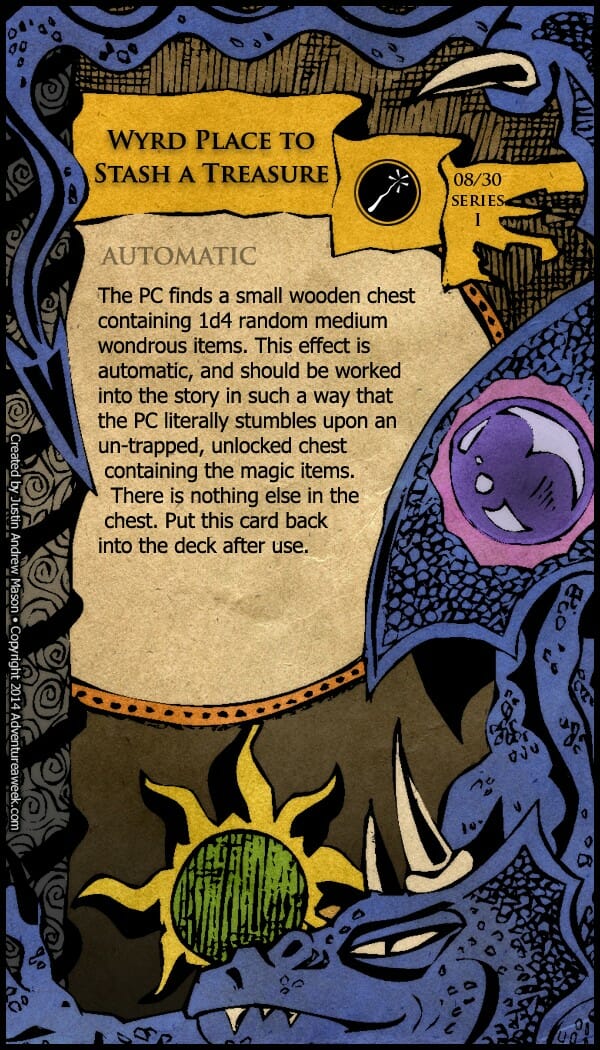 About the Deck of Miraculous Luck

This series consists of six different card types including: healing, magic item, spell, mechanic, storyline, and enhancement. There are five of each type in the 30-card deck, and every card has been sized the specifications of standard business cards (2” x 3.5”) to provide an easy method for print and use.

There are seven “rare” cards, which are removed permanently from the deck once used. All other cards get shuffled back into the deck.

In addition to detailed text explaining how each card is used, they are individually numbered 1-30 and offer a title, an icon identifying card type, and a use indicator (automatic, triggered, or expend).

Automatic cards have an effect that happens immediately after the card is drawn. Expendable cards are held by the player who drew them until that player desires to use the card’s effect. Triggered use cards explain a stipulation that must be met before the card’s effect takes place. 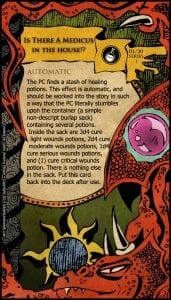 This PDF is arranged to fit pre-perforated printable Avery® Business Card sheets (Compatible Products: 38373, 5881, 8373, 8869, 88220, 88221). However, you can download a compressed ZIP file that contains the individual card graphics and can be arranged to fit other templates if needed.

Enjoy! If you find The Deck of Miraculous Luck useful and would like to see it expanded with additional series, be sure to leave a review. We are considering releasing a new quarterly series of 30 cards that can be added to the deck if there is call to do so.

Please note: this is a digital product. The print version is available from AAW Games on DriveThruRPG.com.

Be the first to review “The Deck of Miraculous Luck” 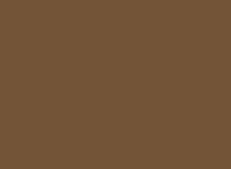 You're viewing: The Deck of Miraculous Luck $4.99
Add to cart