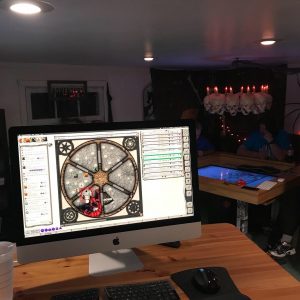 View from the DM's desk

For the past few years, my gaming group has played on a custom gaming table my brother and I built. This is a thing of beauty, built completely from scratch. The table contains an embedded flat panel TV and a gaming PC attached to the bottom, a large square piece in the middle lifts off and comes away to completely reveal the TV and some space in the innards for dice and books. To finish and refine the table my girlfriend and I wrapped the removable wooden tabletop and the legs of the table with pages of ancient AD&D 1st edition books, thus paying homage to the greats. David C. Sutherland's profile view of caverns from the Dungeoneer's Survival Guide was my favorite and final aesthetic addition to the table. My main goal in constructing this table was to bring players together and have them look at one another more often than their laptops whilst using a virtual tabletop in the same room. 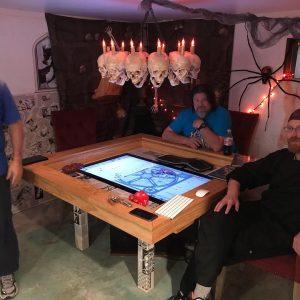 A closer view of the gaming table

We run Fantasy Grounds on this setup and my players really enjoy it, however after years of running the game this way I started to feel empty. The automation took part of the fun out of the game, players seemed to become rule lawyers, and the true roleplaying I remembered as a child and teen seemed only to exist in the distant past. Nothing against virtual tabletops, I absolutely love Fantasy Grounds and it definitely has its place in tabletop gaming, but so does immersive, imaginative, "theater of the mind" storyteller roleplaying.

I dissected this emptiness I was feeling and wondered if maybe I was just more creative when I was younger. Back then I was able to immerse myself and others in another world which seemed to come to life; profound moments in the game would elicit real emotional responses from my players who would sometimes turn white with fright or even cry at the gaming table. I finally realized the reason I wasn't enjoying the game as much, it wasn't just the tools we were using to play, it was our approach and interpretation of the way we were SUPPOSED to play and the rules and expectations therein. 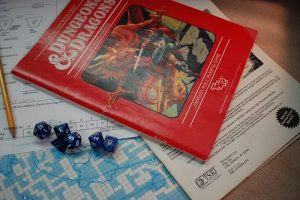 Like many of you, I got my start here.

I decided to go back to my roots to find out what I really loved about playing Dungeons & Dragons, a game I've spent 30 years DMing. One of my first realizations was that I liked things rules-light, a game less reliant on digging through books and more on-the-fly, real-time experiences; truly existing in this alternate reality with the story being told not only by the narrator (DM) but by the players and their PCs whose actions shape the world around them.

I recalled something I'd read in nearly every iteration of D&D through the years, Gary Gygax presented these rules not as the final law of the game but rather as a loose set of guidelines with which to enjoy yourself, giving a DM final call on anything if it improves the game.

So, I set out with a new goal in mind, to participate in and facilitate the most immersive RPG experience possible using the D&D 5th Edition rules.

The first thing I did was remove initiative from the game. What!? Are you crazy? Yes, I'm sure that's what you're thinking but I'll have to get into that in a later post. Things flow better without initiative, you're not suddenly changing from exploration mode to combat mode, you stay immersed in the experience as if you were there; you are deep in the snow-covered forest, strange creatures emerge from the darkness, claws outstretched, fangs dripping with poison as they move toward you. You nock an arrow and take aim just as the creatures let out a terrifying sound "Qweeeeaaahhhhh!!" and begin to charge over the freshly fallen snow.

I removed maps, miniatures, virtual tabletops, all of it; keeping only dice, pencils, paper, and limited books. We went back to using our imaginations to explore and engage the world of fantasy. I realized that all the fancy tools, whilst helpful, took something away from the game and a big part of this included being so reliant on the rules. While I believe we must have a framework with which to run or play a game, there's no need for it to be a burden on the flow of a session. I'm sure you've all experienced that moment where something incredible or terrible is about to happen and suddenly someone wants to do something which prompts the DM and player(s) to crack open the PHB and/or DMG, whilst everyone is hemming and hawing over which way to interpret such an action until someone finds the correct rule or a negotiation and discussion breaks out wasting 20-30 minutes of gaming time and completely ruining the build-up of that moment. In those cases, I say: "make a ruling", it doesn't matter if you're right or wrong, in that instant, you are the narrator, the storyteller, the master of the game, this is YOUR world and a story you are sharing with your friends. Not everything always goes as expected, not in life and certainly not in a fantasy world. Go for the gusto and make the moment even more exciting, keep the flow and watch the players cheer, or freak out as the case may be. 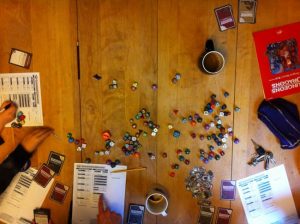 Going back to our roots.

I took extra time during character creation to ask questions about the player's characters and helped develop who they are and how they fit into the world. Perhaps the fighter had two wizards as parents and knows a single magic missile spell but can only cast it every so often. Maybe the human rogue is xenophobic and must constantly restrain herself from attacking other races. Could the half-orc barbarian actually have a bit of elven blood in him and that's why he loves to craft those finely carved wooden toy boats? Whatever you develop with the players, you have a chance to work this into the story, and despite what the rules say about such things, you'll enjoy the game more because of it. If you are going to write stories about unique heroes and their incredible adventures why not make the heroes unique and the adventures incredible? 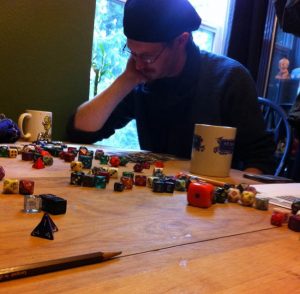 Final words of advice? To all of you who are rule lawyers or very "by the book", try running one session where you loosen up a bit, let the players know ahead of time what you have planned, and just enjoy the ride. While I can't say this method works for everyone, I can say that I think you'll at least have a bit of fun trying it out and who knows, maybe you'll stick with it and give your players the best adventure(s) of their lives.

I leave you with these words from the 1979 Dungeon Master's Guide written by none other than the original Dungeon Master, Gary Gygax:

"It is the spirit of the game, not the letter of the rules, which is important. Never hold to the letter written, nor allow some barracks room lawyer to force quotations from the rule book upon you, if it goes against the obvious intent of the game."

"They are gathered together and eager to spend an enjoyable evening playing their favorite game, with the expectation of going to a new, strange area and doing their best to triumph. They are willing to accept the hazards of the dice, be it the loss of items, wounding, insanity, disease, death, as long as the process is exciting. But lo!, every time you throw the “monster die” a wandering nasty is indicated, and the party’s strength is spent trying to fight their way into the area. . . . Expectations have been dashed, and probably interest too, by random chance. Rather than spoil such an otherwise enjoyable time, omit the wandering monsters indicated by the die."

"If your work as a DM has been sufficient, the players will have all they can handle upon arrival, so let them get there, give them a chance. The game is the thing, and certain rules can be distorted or disregarded altogether in favor of play."

What rules have you ignored or changed to better the flow and enjoyment of your games? Would you like to hear how my rules-light game is going? Leave your comments below! -JGN