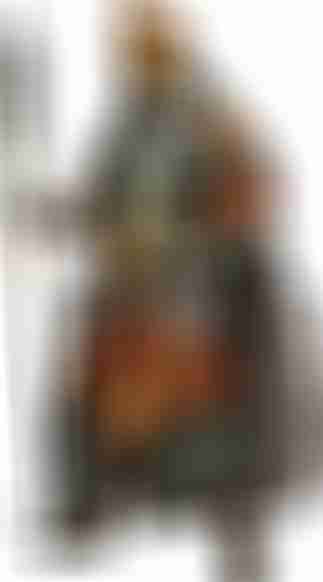 Joining the priesthood at such an early age was the will of his Uncle Siescor after Juriendor’s parents’ untimely death. Uncle Siescor saw a strength and wisdom in the young Juriendor that his father had not. He urged him to take the oath to the God of War and become a member of the church.

Juriendor swore to make a difference in the world and fight for truth and justice wherever the winds of change blew strongest. Juriendor made a difference wherever he went, solving problems using wise and insightful diplomacy. When diplomacy failed, the God of War summoned courage and strength within Juriendor’s very being which he in turn bestowed upon the other priests. Juriendor proved himself in the church, at the negotiation table, and on the field of battle. After many grueling combats and tactical victories, Juriendor was promoted to High Priest of the God of War.

A progressive force in a cold and dangerous world, Juriendor has been placed on the frontier of civilization in his first position as High Priest of the God of War at the Rybalka Temple.

High Priest Juriendor preaches a daily sermon at the Rybalka Temple each morning immediately after sunrise. His six acolytes and two priests assist townsfolk with minor matters, while High Priest Juriendor handles larger religious and moral matters. He assists in steering the village in the proper course of action when dealing with diplomatic neighborly relations. Thus far the High Priest has done an outstanding job and the townsfolk hold him in very high regard.

High Priest Juriendor is available to heal adventurers for the standard costs.