aka Lowland or Riverside Villages

These three towns, knows as ‘The Three Sisters’ to those who live in the area, are the first stops that you come to after you pass Fort Antone as you come “down” the Serpent River, as well as being the first towns you reach when heading south from Mohkba. 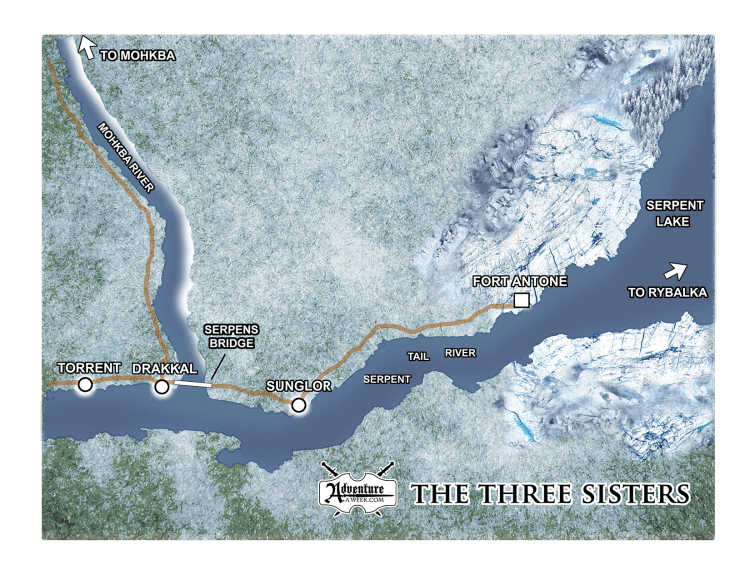 Sunglor is the newest of the Three Sisters and is based at the first turn of the Serpent Tail River and is a wonder to behold, for a large town. Everything is kept clean and bright, the docks are nice and orderly, and the people are friendly. This is due to the major religion of Sunglor, which is worship of Flaesuros, God of the Sun. Patricia, Priestess of the Sun, works with Sheriff Potter so that any prisoners who wish to work time off of their sentence can help around town with various jobs, as long as someone in the town is willing to be a patron for that prisoner.

Since Sunglor is on the bend of a river, there is magic that flow through the town. This magic, along with the town’s position on the river, may be why the town is as prosperous as it is. The downside to all of the river traffic is that the citizenry hear plenty of tales from up and down river and these stories tend to pass through the town.

Drak’kal is the oldest of the Three Sisters and is situated at the confluence of the Serpent River and the River Mohkba. This gives it the most trade traffic on the river. Drak’kal is also a destination for those who worship Nearru, Goddess of the Moon.

Legends tell that at this confluence, Nearru and the Klavek hero Jazoh fought with a dragon of untold proportions. As they struck the killing blow, the dragon was flying over them and sailed into the distance, never to be seen or heard from again. On the north-northwestern side of the confluence, at the foot of the Serpens Bridge, there is a stone that is shaped like a crescent moon that has been cleaved partly through. The loremasters of this tale say that Nearru fashioned the stone and Jazoh cut through it as a mark of their union.

The town itself is chaotic, disorganized, and, at times, barely functional. Holds up at the docks are not helped by Dockmaster Casta, who tries to get his greedy fingers into as many pies as possible. From charging unheard of (and obscenely high) “docking fees,” “cargo fees,” or “passenger fees,” that money goes straight into Casta’s pocket. Although there have been numerous complaints to Marshall Mulcahey, Casta has a complex system of how the docks are run that no one else understands and Tatiana came to the conclusion that hiring a new dockmaster and untangling everything at the docks would end up costing more than the town can afford, so she allows Casta to charge these fees, but talks with him occasionally about making sure some of those funds make their way to the city coffers.

Torrent, named for the increase in the speed of the where the two rivers join, is the “middle child” of the Three Sisters. Founded by a group of Klavs who tired of living with the God of War as the main focus of both life and religion. After an exchange of information with a tribe of Vikmordere, these Klavs took the story of Storjeger, the Vikmordere God of the Hunt, to heart and broke away from Mohkba, founding the town of Torrent based on the philosophy of balance.

This small town isn’t exactly lawless, as Yugorg Daemonbreaker, Ogre Jailor, does his best to maintain order. This is helped, somewhat, by Matron Dunleavy having opened a “school” of sorts to teach those who can afford the 5 gp tuition how to hunt, fish, and trap the land, but to do so without taking more than they need. Balance is the key.

Most of Torrent’s trade is done with the sailors themselves. Matron Dunleavy has found several nearby spices that add a lot of flavor during the drying process and she has it sold on the docks so boats can resupply before making a trip either up or down river.