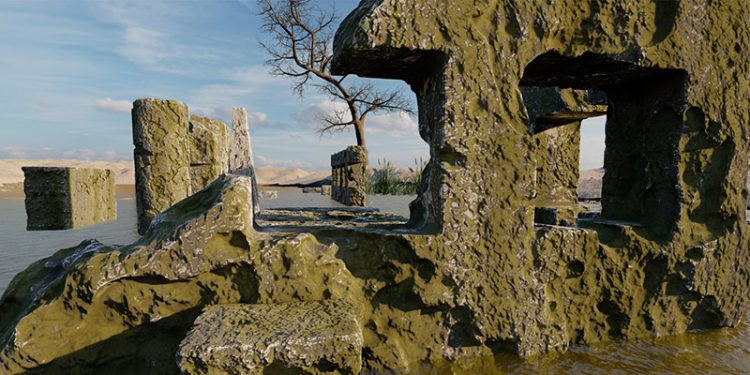 An adventure location based in the Aventyr campaign setting but usable in any game system or setting.

Lake Chonia, in Aventyr, was once the site of a Grekia, a thriving, desert metropolis populated by great artisans and architects, poets and linguists, mages and sages, mathematicians and theologians.

One day, a great rain came to the desert, a rain which lasted for 92 suns and 92 dark moons. It flowed through the mountains, the canyons, and eventually, even the dry desert filled with the gathering rains.

At the lowest point of the Chonian Desert, in an ancient elongated-graze impact crater, the water pooled, first a puddle, then a pond, and eventually, after weeks of deluge where “air became rare and water fell like rivers from the sky”, Lake Chonia, was formed. And under the natural force of these otherworldly rains, the great knowledge, culture, and peoples of Grekia, were lost. Some say, it was the will of the gods, but for what purpose or punishment, it is unknown.

Over the centuries, with ever-increasing warmer regional temperatures, Lake Chonia began to shrink in size.

The land itself has grown warmer, due to the Shard of the Sun’s increased proximity to Aventyr.

Present-day Lake Chonia has mostly dried up and is a but a remnant of her former self.

With the receding waters, the Ruins of Grekia have begun to reveal themselves and their grand treasures, granting adventurers and explorers the chance to glimpse and thieve away whatever is left of the once-great civilization. Would-be-treasure-hunters beware! There are more than just treasures and knowledge-laced tomes hidden in these ruins, for there are ancient evils, undead spirits, and Grekian experiments which broke free after the fall of Grekia and now roam the underground ruins and deep waters.

Traveling through the dry, rocky badlands and scrub plains around Lake Chonia is a dangerous task in and of itself. There are deadly creatures, horrifying monsters, and brazen bandits, and if those don’t kill a traveler, the lack of food and water will. In the rocky badlands near the mountains are additional hazards, including small rocky cliffs, canyons, deadfalls, and more. The majority of the scrub plains are relatively flat, although some geographical and humanoid-made hazards do exist.

Drought and famine have struck former Chonia hard this year, due in part to the proximity of the Shard of the Sun (a fragment of the sun), circling the planet on a much tighter orbit. In addition, the cost to proxies of the gods to channel energy to this desolate area is too much and thus, once per week, a suitable spellcaster may only request a small amount of food and water.

Note: A spellcaster may only attempt this spell once per week whilst in this region.

You create 9 pounds of food (rations) and 9 gallons of water on the ground or in containers within range, enough to sustain one humanoid for 1 week or seven humanoids for 1 day. The food is bland but nourishing and can be kept, without spoiling, for a period of 14 days. The water is clean and doesn't go bad.

Water is scarce and difficult to find in Former Chonia. By roaming a 2d4+2 mile radius, for 1d2+1 days, and with a successful DC 20 Wisdom (Survival) check, one can find a spring to rehydrate and replenish waterskins. There are only four such springs to find in the natural desert valley framing Lake Chonia.

PCs need one pound of food per day

PCs can make food last longer by eating half as much, which counts as half a day without eating

PCs can go 3 + Constitution modifier days without food, after which doing a day without eating causes an automatic level of exhaustion

PCs need one gallon of water per day, two if the weather is hot

Some Special Abilities and environmental Hazards, such as starvation and the long-­term Effects of freezing or scorching temperatures, can lead to a Special condition called exhaustion. Exhaustion is measured in six levels. An effect can give a creature one or more levels of exhaustion, as specified in the effect’s description.

If an already exhausted creature suffers another effect that causes exhaustion, its current level of exhaustion increases by the amount specified in the effect’s description.

An effect that removes exhaustion reduces its level as specified in the effect’s description, with all exhaustion Effects ending if a creature’s exhaustion level is reduced below 1.

Finishing a Long Rest reduces a creature’s exhaustion level by 1, provided that the creature has also ingested some food and drink.

*For higher levels, or as needed, use the Desert Encounters tables in XGtE. 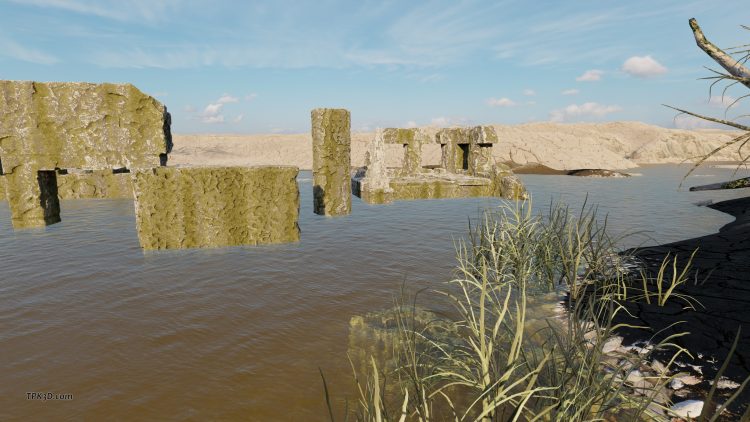 With the lack of water, Lake Chonia has become the obvious destination for the majority of animals, monsters, and humanoids dwelling in this region. That also makes the lake a choice place for bandits and raiders to ambush travelers or would-be-treasure-hunters looking to delve into the Ruins of Grekia.

*For higher levels, or as needed, use the Desert and/or Underwater Encounters tables in XGtE.

The Ruins of Grekia are 90% underwater, the small amount above water are mostly looted. Those who dive underwater or can subsist without oxygen for long periods of time may explore the full extent of the ruins, which are rumored to contain vast treasures including many priceless works of art, books and tablets with great amounts of lore, and the fabled Grekian Runestones which contain magic and were worn by nearly all who once lived here. Of course, there are also tales of powerful and dangerous beasts beneath these waters, some which have only been seen here, in Lake Chonia. 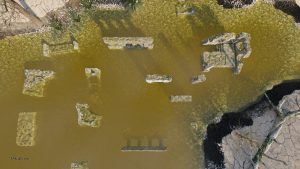 Lake Chonia, Grekian Ruins battle maps are usable in virtual tabletops or using real miniatures on a 40" monitor laid flat on the table. 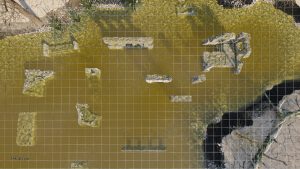 Searching the Ruins: Characters must roll a successful DC 16 Wisdom (Perception) check followed by a successful DC 18 Intelligence (Investigation) check in order to discover something unique in the ruins. If these checks are both successful, roll on this table. Reroll duplicate results, create your own treasures if most of these have been used and the party still wants to explore. For every 1d4x10 minutes exploring the ruins there is a cumulative 10% chance of an encounter.

Whenever one of the Grekian’s fabled Runestones are found, roll on this table.

All Grekian Runestones attune to their users immediately and cannot be removed by any known means (sans death).

Limited Lifespan: Have a player roll d% dice upon picking up a Runestone (reroll anything 90+). The percentage rolled becomes the percentage chance it will work once per day although the user may not control how or when the stone is activated. The magic in these ancient stones is slowly fading and every year which passes reduces the chance it will work per day by another 10% until it won’t work at all and the glow, and magic, fades.

We were able to coax enough rations from the owner of the Inn to last us several days, but even without Rizri's ability to forage, we should be able to hunt down that bone merchant before we choke down the last dry biscuit.

This land is worse than the reports said. Something tells me Captain Bohacz knew the reports were outdated. Why else would he send such a pack of misfits to hunt down someone like this. Likely he didn't think any of us would survive. The land is so dry and hot, he might end up right. Even the scrub is thin and cracking. The only animal tracks Rizri can find are taking us to the large lake we spotted when we crested the rise yesterday. It looks like it's been drying up for a few years. There are some ruins set around it and poking up out of the water. If that's the only water source, that's where the game'll be, where the people around here will likely congregate, and then you'll get the bandits. And worse. I hope Stok sobers up soon. 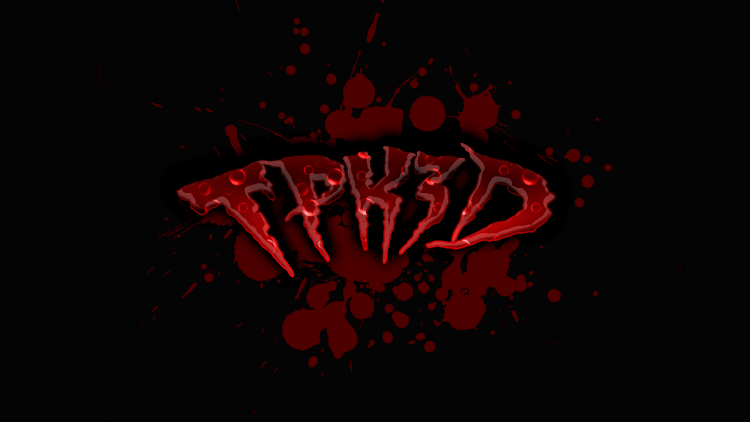 To get the full set of maps and cutscenes, support TPK3D on Patreon!