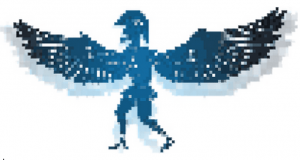 DESCRIPTION
This triple-buckled harness fits around the chest, and when worn by a creature, a pair of feathered wings unfurl from the back.

The wings of the archon can be worn over clothing and armor. Despite the harness’ ability to enable flight, the ornamental wings only appear to be functional and do not serve any real aerodynamic purpose. The wings of the archon have five charges per day that renew 24 hours after the first charge of the day was used.
The wearer can expend one charge as a swift action to instantly launch themselves skyward 20-feet and gain a fly speed equal to their base speed (perfect maneuverability) for 2d4 minutes or until they reach more than 500-feet from their launch point (whichever occurs first). This effect fails to function if the user carries more than a medium load.
The wearer can expend one charge as an immediate action to activate featherfall.
If a 24-hour period passes where no charges are used from the wings of the archon, the harness manifests a single white feather that falls from the ornamental wings. Though the individual feather has a faint aura of conjuration, it has no magical abilities by itself; however, when five of these faintly magical feathers are bound into a totem and cast into the sky, the totem is consumed in a flash of golden fire and a single trumpet archon appears in its place (as summon monster IX; CL 17th). [As a part of the Lands of Ludolog: The 2-Bit Dimension, this week’s miniworld is cloaked in powerful magic that prevents any archon from entering it. For this reason, the last ability of the wings of the archon does not function while inside. -JAM]