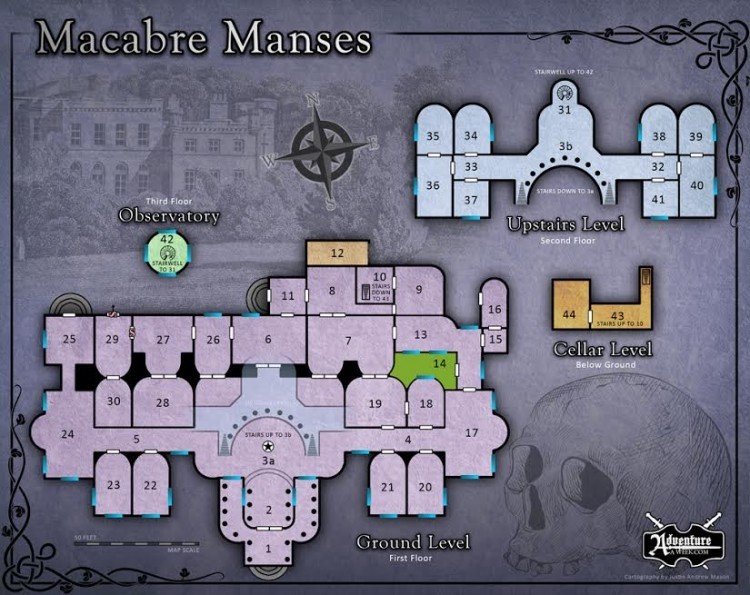 If leading into this week’s sidequest from “Finding the Macabre Manses” the PCs should be at least vaguely aware that someone (or something) has ushered them to their current locale. While the exact entity behind the strange events in the forest remains unknown, a DC 30 Knowledge (religion) check raises suspicion that some element of the divine is at play here, though the reason remains unclear.

In this case, the mysterious man who appeared at their campfire was in fact a powerful lawful good outsider—a being in service to a good deity whom has chosen the party (either for their virtues, or perhaps due to their lack of them) to put an end the meddling of an evil demon who has come to lurk upon this plane of existence for a while longer than the deity would prefer. 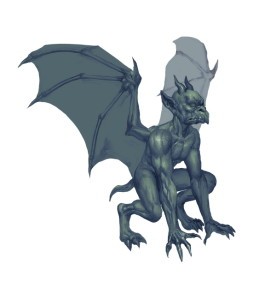 The demon has currently allowed its power to be bound to a cursed artifact, the fleshdoll stage, where it takes great joy in further twisting the mind of Madam Sutradhara, the Fleshdoll Masterminder. While bound, the demon’s power is somewhat limited—though not so much so that it is unaware of the PCs arrival to this plane. With the adventurers nearing the Macabre Manses, the demon used his powers to animate the gargoyles at the gate (from last week’s Sidequest) in an attempt to stop the party from interfering.

With the PCs having defeated the stone monstrosities, the bound demon’s power is too weak to make any further attempts to thwart the adventurers further, though he does telepathically warn Madam Sutradhara about the guests arriving at the manor. Her plan is simple: use the fleshdoll stage to incapacitate the party, binding the spirits of the PCs to fleshdolls or, if need be, rely on her zombie servants to do the dirty work. Given the option, she would prefer to add new members to her macabre troop of miniature puppets.

When the PCs approach the mansion, the storm surrounding them grows more intense. A flurry of lightning accompanies crashing thunder and intense gale-like winds in a downpour of rain and hail as nearby trees flail violently—by the time they reach the front porch of the structure, the adventurers are battered and drenched. 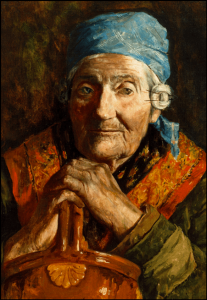 Madam Sutradhara awaits their arrival, greeting them at the currently opened front door. She hurriedly invites them in out of the weather and struggles against the prevailing winds to close the door behind them as the party enters the mansion’s greatroom.

The PCs enter the area of effect of the fleshdoll stage when they step onto the front porch, and the five-minute activation countdown begins. The crone attempts to stall them until the artifact has had its effect and their bodies fall lifeless to the floor. She is wearing an amulet of nondetection that prevents the PCs from discerning her evil alignment by any means. However if perceptive, the PCs may suspect that something is not quite right with the situation and their eager host.

Once five minutes have passed, the collected souls weird event takes place and the PCs find themselves bound within the bodies of fleshdolls and trapped upon the fleshdoll stage where they interact with the other trapped spirits that share the curse of the insane masterminder. They storm eventually passes late in the evening, and the PCs are not be approached by Madam Sutradhara until the following night when she comes into the study to prepare for an evening performance. 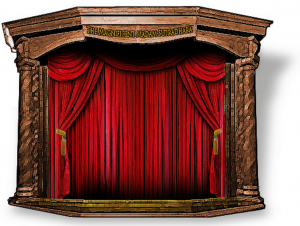 After arranging a dozen chairs neatly across the chamber in front of the stage’s curtain, she lights a target lantern from across the room that casts a bright beam of light down over the chairs and upon the center of the stage. She spends several minutes preparing the setting, using her necrotic puppet mastery supernatural ability to tame any rowdy fleshdolls as she explains to them that they had better keep their mouths shut and perform as she wishes or she will feed their true bodies to her “pets” (human zombies CR 1/2)—a threat from their new mistress that a DC 10 Sense Motive check reveal to be most likely be true.

Masked by the glaring light of the lantern, a drove of shadowy figures enters the room and sits quietly in the prepared chairs—apparently an audience here to watch the performance. The “audience” is actually made up entirely of (4+2d4) zombie servants under the control of Madam Sutradhara. The necromancer uses ghost sound to generate appreciative applause as needed, but the zombies remain motionless and silent otherwise. 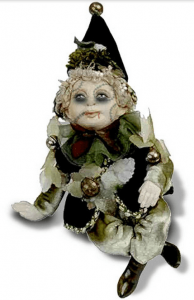 Note to GM: Depending on what random fleshdoll bodies the PCs were bound to, the cast of characters for this puppet play could be quite interesting. Have fun adlibbing the story of the performance while including the various established fleshdolls. Don’t be afraid to be outlandish and inappropriate—remember, Madam Sutradhara is both devious and insane.

Inevitably, during the performance at some point the fleshdolls are going to make their move (with or without the PCs assistance). They make continuous attempts to resist the will of the masterminder, and when free of her suggestive powers, directly assault her.

Sutradhara’s initial response is to utilize her necrotic puppet mastery ability to cease the attack, but when this fails she withdraws to the back of the room and commands her zombies to, “destroy them all!”  It should be at this point the PCs notice the audience approaching the stage and come to realize they are all undead being controlled by the masterminder. While the zombies are a threat, the true target of the fleshdolls is the necromancer herself. The collected spirits of the Hiendlewynn family know that the only solution to ending their curse is the death of Sutradhara, and they stop at nothing to see their mission through—even if it means murdering the old woman while she cowers in the corner once her thralls have been defeated. 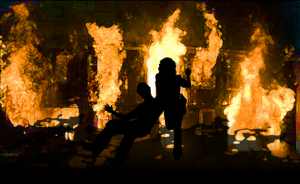 When she is killed, the roof is on fire trap triggers and the PCs (and remaining NPCs) are returned to their preserved natural bodies, and must escape the mansion as it burns down around them.

After the mansion is destroyed, and the demon and spirit of Madam Sutradhara have departed, the PCs are blinded for one round by another lightning strike—this time into the smoldering remains of the mansion. When their sight recovers from the flash, they see standing before them the same man whose initial arrival (in last week’s Sidequest Saturday) kicked off the recent strange events.

He congratulates the PCs for a job well done, and informs them that it is time to claim their reward. Any survivors of the Hiendlewynn family who are present immediately take a knee and lower their eyes in respect to the figure. If asked why, they explain that he is a well-known and revered messenger from the gods. 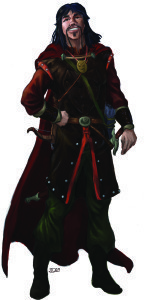 With a sly grin, the man winks to the adventurers and informs them, “Thank you, once again. You performed exactly as hoped, and my illustrious employer may have use for you again in the near future!” Blinded once more by a sudden strobe of lightning and a deafening clap of thunder, the PCs suddenly find themselves alone and no longer standing before the destroyed mansion.

When returned to their own realm, if the PCs were traveling towards a specific location when they were encountered by the man originally, then they find themselves within eyeshot of that location. They are healed and restored from any negative effects, fully rested and rejuvenated (gaining +1 morale bonus to saving throws for 24 hours). Next to the party, in a neatly stacked pile on the ground, is a stash of twine-bound burlap sacks, one for each PC—their reward for persevering the trial set before them.

Each sack contains the following: 1,500 gp, 1d4 random minor wondrous items, 1d4 random potions, and a sinew necklace from which hangs a tiny wooden carving depicting the fleshdoll figure that each PC inhabited while they were bound to the fleshdoll stage. The necklaces are magic items (faint aura of illusion, CL 5th; +2 to Will saves; cast ventriloquism at will).