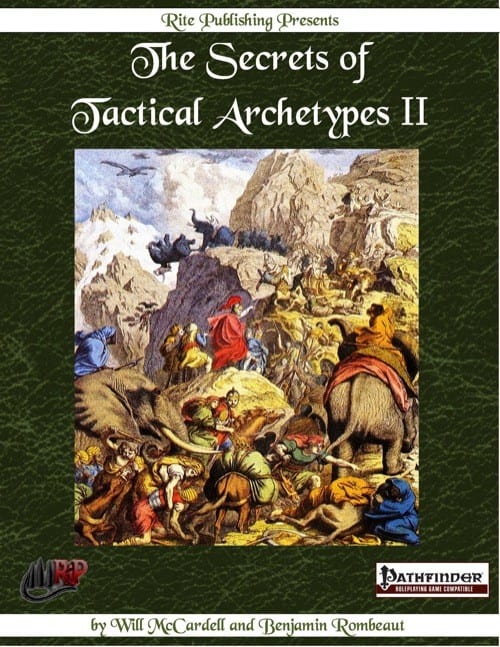 Addressing Tactical Archetypes again with volume 2, Rite publishing gives us a PDF weighing in at 28 pages. Cover, Credits, OGL and an Ad and we're at 24 pages left for the new archetypes. Opening with a small explanation of the underlying concept of teamwork that ties these archetypes together, we dive right into the material following a short alphabetical listing of the new archetypes by class. With fourteen new archetypes, there's a varied collection that should have no problem appealing to fans of many different classes.

First up is the Aetherurgist for the Oracle class. Introducing the idea of a Spirit Mastery Score that increases every odd level, several of the abilities for this archetype base their math on not only the character's Oracle level, but also their spirit mastery score. With a list of abilities putting them as the character in tune with the spirits of the dead, the aetherurgist learn to speak the tongue of the dead, may summon both defensive and offensive spirits, and may utilize them in both touch and ranged attacks. With the new revelation options we are given such as Grasping Spirit: fills an area of terrain with spectral hands that grasp onto anything living that attempts to pass, or Swarm of Souls: a spirit you summon appears under the effect of mirror image.

Next we have the Circle Warden for the Witch, an archetype with a penchant for uniting her comrades or those under her protection within a link of fellowship. White Hexes, talismans of protection, and the ability to channel positive energy.....I could not help but think of every witchcraft tv show I have seen come out within the last decade, as well as many movies, that depict the witch characters as these super helpful, largely beneficial beings who exist solely to aid all of those around them......No thank you. Mechanically, an interesting archetype, I''ll give it that, but there are classes I like just they way they are, and the Witch, socially correct or not, is one of those classes that I'm very comfortable with as it is. Totally a personal opinion and matter of taste on this one, but I just wasn't feeling it.

The Elementalurgist for the Druid shows us that not all druids are animal loving tree huggers, there are in fact druids who take it a step even further, and attune to the elements themselves. For the elementalurgist, the four elements, and their subdomains (excluding metal) gain their loyalty and worship. Not content to simply be good with nature and the life existing within it, this archetype goes back to the building blocks of all reality itself, and works to master a relationship with the powers of the elements. Now, it is worth noting, that this archetype was where I found the first piece of rule that left me scratching my head, as there seemed to be some conflict, and contradiction. Within the abilities for the elementalurgist, we have Elemental Infusion, a rather cool concept that allows you, depending on level, to infuse your allies with aspects of elements you are attuned to. So far, so good. In the examples of what this visually might appear as (we won't bother with crunch and math here, as it is the fluff that goes a little wonky) we're told, for example, that an ally infused with fire might have a faint aura of fire around their weapon, or one infused with adamantine hardness might take on a metallic sheen.....what, Wha? Now, to be clear, allow me to quote...””...the elementalurgist may attune herself to one element: Air, Earth, Fire, or Water. Attuning herself to the element grants her that domain. She may choose any subdomain of these, except for the Metal subdomain..” Now, unless I have missed something, adamantine is still considered a metal, and therefore anything dealing with it should probably be under that header of subdomain, Metal. So, am a little confused here, if its off limits, why then does the very first example of what this archetype can do clearly show the usage of this subdomain? Now, there are several really cool concepts and abilities throughout this archetype, so don't think this hiccup derails it, just would of preferred some clarity there is all.

The Force Commander gives us the nod towards that wizard controlling the world through a game of chess. Literally controlling the forces marshaled upon a field of battle via game pieces, the Force Commander is, for me , a guaranteed NPC option only. I just don't see to many opportunities in a normal game's session for a player to make the most of this archetype, nor be able to use some of the cooler abilities often enough as an adventurer. That being said, as an NPC option, or a PC option in a campaign geared toward a larger scale army on army combat, this would be a very cool character concept, both for the visuals as well as the effects upon the battle. What intrigues me would be to set two opposing forces against each other, with a Force Commander on either side of the field, giving each to a separate PC, just to see how it would play out.

There are, by my count, ten more archetypes, and I am willing to bet you've got a fair idea of the design concepts at this point, so I shall shorten my notes on the other ten, for the sake of expediency.

Grand Inquisitor, for the Inquisitor class, is that line in the sand that separates a martial inquisitor from those pious individuals who are just downright scary in their judgement laying abilities. I have to admit, my first thought upon reading this archetype, as far as how would I explain one of these guys to a player was Archdeacon Claude Frollo of the Disney rendition for Hunchback of Notre Dame...with spells.

Magilith shows the sorcerer some love, born not of a bloodline granting them access to spells, but born upon “a convergent point, or node of eldritch might”. Essentially a magic sponge/battery, the magilith gives up a portion of their own spellcasting to gain disjunctive capacities as well as being the groups buff character as far as sacrificing their own spells pass out enhancements and bonuses.

Peltast, fighter class, as much as I see them being extremely limited in an actual melee fight, was one of the more practical archetypes as it gives a nod to the various cultures throughout history whose warriors have focused upon the thrown weapon as opposed to the held. Again, a very cool concept, but one I see more being useful to the GM as an NPC, or perhaps a challenging character concept for a veteran player looking for something different.

Pious Sentinel gives us that Cleric who affects the actions and outcomes of battle through the divine will of their God, praying for favorable results for their allies.

The Purifier paladin answers the question “What if I'm a lover, not a fighter?” A paladin option for those who are looking to play a kinder, gentler soul, one more focused on healing and altruism. The odd thing here is that the purifier gains hex levels, replacing the mercy abilities.

Savage Tactician give us those barbarians who have learned to strategise, rather than simply rush headlong in to battle.

Spellchymist are the alchemists seeking to further blur the line between alchemy and magic via further emulating the spells they seek to recreate to the point of ranged effects.

The Umbral Weaver just might be the most supported archetype presented within this collection. Whereas several new feats, spells and items have been presented throughout the book with a few here and there, the Umbral Weaver gains a slew of class abilities, new feats and spells. A bard who looks to the shadows for their power, the entirety of this archetype, for me, can be summed up with their very first class ability, Wisps of Dusk. A variation on dancing lights, Wisps of Dusk bring into being globs of shadow instead of lights. Yes, it's low in level and power in relation to what these bards end up with for options, but at the same time, it is that gloved hand in the dark, outstretched and inviting you to follow, to see where it's going. Out of the entire collection, this was my archetype, and it was the Wisps of Dusk that caught me. I actually had to stop reading through the book, and work up a rough character concept for my gallery of NPC's, I couldn't stop pondering this archetype. His name's Frialgo, he owes his existence to the genius behind the design of this subtle, and brilliant archetype. Well done.

Vicious Opportunist is an archetype presented for both the rogue and ninja classes, trading out Ninja Tricks for Rogue Talents where needed or appropriate. Essentially that combatant who always knows where and when to strike, and is always looking for the sweet spot, that one moment in battle when it's time to strike.

War Scholars are those monks who excel at strategy on levels that defy the most seasoned veterans. Understanding the complexities of terrain preparation, the management of ones troops, misdirection and the gathering of intelligence upon your enemy, the War Scholar formulates and utilizes their knowledge hand in hand with their class abilities to formulate and undertake vast combat maneuvers.

Final thoughts...formatting follows the dual column layout with embedded artwork. Rite publishing continues with their old world styled artwork which is beginning to be a signature for them with several of their releases. I think, grand total, I found two grammatical missteps in the entire volume, and they were so mild I didn't bother to note them specifically, as neither caused any true disruption. For those looking to flesh out a collection of NPC's there is a great deal of material to work with here, but as noted previously, there are those I have a hard time seeing as usable by PC's. There is also the concept of a few of these archetypes being designed for large scale play within a vast combat scenario for most of the characters activities, which must be taken into consideration when deciding if such concepts apply to an adventuring character.

As stated, I have fallen in love with the Umbral Weaver, and actually had to stop writing this review to roll up another one, although I am hoping to be able to actually play this one, as opposed to simply relegating him to the ranks of my NPC's.

As a collection of new and interesting Archetypes, this collection more than succeeds. Offering something to both players and Gms, as well as supporting the archetypes with various new spells, feats, rogue talents, ninja tricks, rage powers and items. With the Spellchymist I can't help but feel so much more could have been done, in comparison to other archetypes presented it flats flat and lifeless.

In total, taking into thought how many of these I would play myself, and how many I would relegate to the NPC bracket, and the few that would never see the light of day at my table, I am going with a 4 BOG TROLL HEAD rating.