The Fla’nag Asylum was built not out of the desire for such a structure, but by the necessity for one. The madness that seeps through the Dar’Spelun Slugmarsh had left too many madmen wandering the land, dangers to themselves and to others, so the dweorg Fla’nag Irontooth carved this sprawling asylum from the living rock of one of the nicer the caverns nearby, just outside the Tangleroot Forest.

However, Fla’nag was unaware that as he carved the tunnels that would become his asylum, the work was being guided by another hand: that of the swamp’s madness slug. As work progressed, the asylum came not to be an ordered structure as the dweorg had originally intended but one with sprawling hallways and rooms of every size and shape—all of which form a titanic symbol designed to focus madness inwards, concentrated by on a narrow planar breach at the asylum’s heart.

It took only six years after the asylum opened before reality cracked, spilling it into the Plane of Madness (and drawing some of the otherworldy realm into the Material Plane). Today, the asylum exists in at least two places at once, and the architecture constantly warps and folds upon itself, trapping any fool brave enough to explore its halls. Even locating the asylum can prove a challenge: oftentimes its entrance can be found in the Tangleroot Forest, but other times the doorway crawls through the Dar’Spelun Slugmarsh, or even disappears entirely.

Those that do escape with their lives and minds intact tell terrifying tales of what the place has become. The committed are dead to a man, though their spirits still stalk the halls and their final screams hang in the air. The hallways stretch to infinity in nearly all directions (though sane enough minds can hold them in place long enough to traverse safely, doing so only makes it easier for the creatures within to track their prey). The once-dweorg guards and doctors are now eldritch horrors and dark scions, endlessly patrolling routes and guarding empty chambers for reasons only they understand.

Worst of all—so the stories go—is the warden: to survive the encroaching madness, Fla’nag reached out to any power that would answer, signing a blood pact with the devils of HEL in desperation to transform him into a powerful gitwerc that could survive, and perhaps even rule over such a place. Now he toils to siphon off fragments of the mad souls to his new masters, eagerly seizing any new life that stumbles into his domain. 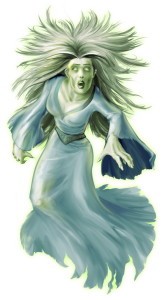 Though impossible to map the majority of the asylum, there is a semblance of order that persists throughout. The atrium that connects to the outside world remains virtually untouched by time, and there are very distinctly upper and lower ‘floors’: the upper floors are often filled with a haze of smoke and mist while the lower floors are instead flooded to a greater or lesser extent. The wellspring of the water that floods the Fla’nag Asylum isn’t known, but the water is tainted with madness, mutating those who drink from it or driving them insane.

No maps of the Fla’nag Asylum survived its collapse, so it is impossible to tell how many of the rooms within exist purely on the Plane of Madness. Rooms seem to appear and disappear at random, or perhaps their appearance is guided by Fla’nag or some greater power distilled from the plane itself.

There remain cells with padded walls and few corners, and offices now often featuring torture implements as often as simple desks and chairs, but other more obscure rooms still exist, whose purpose has been lost to madness or whose original purpose may never have quite been met. The only fragment of Fla’nag Asylum that remain unchanged from the original days is its heart, where the planar rift hangs invisibly in the air. A coven of drow witches makes their lair here, servants of the madness slug herself.

Though the architecture is constantly in flux, the spirits and energies within the asylum are fairly consistent. During any encounter, or once each hour spent stationary in the asylum, a GM should roll to see which madness effects manifest in that location.