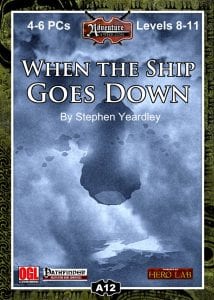 Stephen: Well, this was inspired by one of the two comments from our group that have stuck with me most as I DMed. Foz, a player that really likes to know what's going on before he flies into action, had been caught out by a trap and for a while, his character's mantra became;

(For the record, the other comment is, "You greedy dwarf, you've eaten all the candles!" But that's another tale.)

I'm also a big fan of confusing PCs' expectations. PCs are mostly used to getting their own way, so, for example, in A6, they are thwarted at every turn and have to go through a lot before they succeed and in areas of A9, many of their expected ways of doing something have to be changed completely around.

So it struck me that PCs expect "the dungeon" to be a certain way up. We'd looked at zero-gravity in A9, so didn't want a repeat, but sometimes it's a minor difference rather than a major one that becomes the inconvenience. What might that inconvenience be?

Two films came to mind as well. "The Cube", which has been an inspiration in many ways for a decade and a half, as it goes from providing ideas for deadly traps all the way to showing the way characters' feelings ebb and flow, albeit in a shortened timeframe, and to a lesser degree, "The Undiscovered Country" with its the assassination scene, not because of the anti-gravity, but the way it looks with the assassins in the magnetic boots, climbing up and down at different angles.

Of course, creatures that can fly, climb well or just plain float won't ave any probem with any of this, so the inconvenience is only for the PCs, who must either be well equipped, use lots of magic or just climb a lot. That fighter in his banded mail, boy, I bet he wishes it wasn't quite so heavy...

Jonathan: You can read Stephen Yeardley's adventure "When the Ship Goes Down" right now on Adventureaweek.com or purchase the PDF which should be released on Paizo and RPGnow sometime next week! Enjoy!

About Acanthus the Sage

View all posts by Acanthus the Sage →