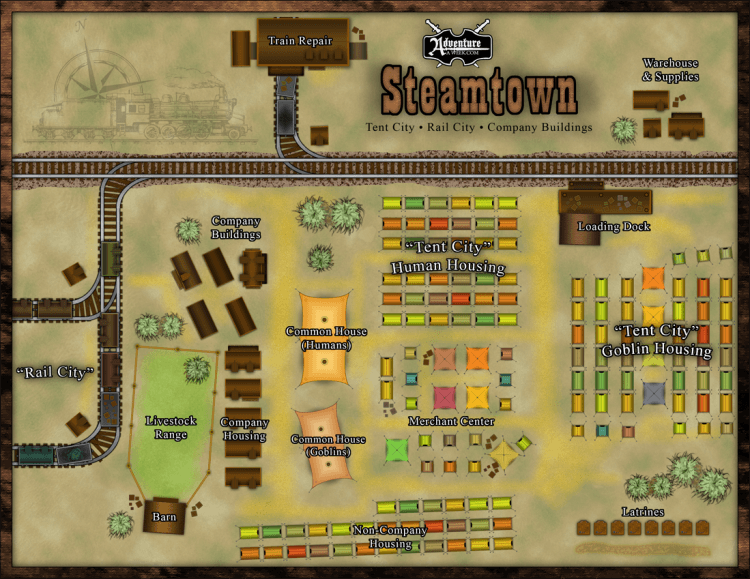 There's only one law in Steamtown, and that's the company.
They have only one rule—keep working.

Now 100 miles away from Branham, Steamtown is a temporary, mobile town that provides living quarters, goods, and services for approximately 900 workers of the Pradjna Northern Express Railroad. Along with the laborers, there are approximately another 100 residents that offer goods and services to Steamtown's residents.

The settlement is made up almost entirely of temporary buildings and tents, moving periodically as more track is laid—Steamtown is never more than 8-10 miles away from the end of the track. Most of the time, the bulk of it is on the south side of the track, with some support buildings on the northern side. Steamtown is very much the wild west; rule enforcement is quick and decisive, fights are common, and workers tend to get into trouble when they aren't working. Racial tensions between the goblinoids and humans have also grown taut, and they are mostly kept separated, with only the humans and gnomes keeping positions of authority. Goblinoids who have come to escape their own tribes are quickly disillusioned and usually harbor great resentment—while they are technically not slaves, they are not treated well. Most of them have contracts that bind them into virtual slavery, as they would owe a monetary penalty for leaving early (which is never less than a year). Occasionally the leaving date is listed in the contract as a progress goal, replaced instead with clauses like, "after so many miles of rack has been laid". 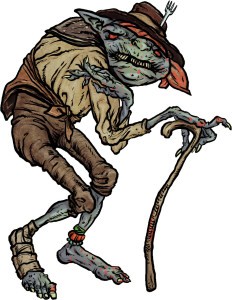 Human Housing
The tents for the humans (and gnomes, the 150 overseers and foremen) are less crowded and in much better repair than the goblinoids', and their much cleaner latrines receive far better maintenance.

Merchants' Section
The center of Steamtown contains several tents where all kinds of goods and services are available, albeit at high prices. Just to the south is a ramshackle collection of marquees where the merchants live. Successful merchants have tents that rival nice houses, while others are little more than a lean-to in the mud—a few special traders are detailed below. 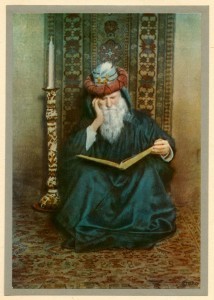 Elridge's Magical Moving Pictures
Elridge (CG Male human wizard 5; +9 Diplomacy, +9 Sense Motive, +9 Bluff) uses a mix of props and illusions to create realistic scenes of the workers' homelands. Laborers give a detailed description of what they want to see, and he prepares a show to that effect. His tent can seat up to 20 patrons, each paying 4 silvers to see the show (which generally lasts for about 10 minutes).

Gronk's Kitchen
Gronk (CN Male orc expert 1) specializes in preparing goblinoid food—the fare given by the company or at the saloon is rather limited for goblinoids otherwise. The orc chef exploits this gap in the marketplace with his expert care and large variety of strange cuisine. 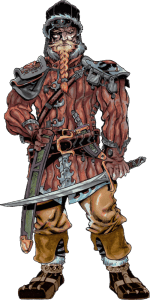 Don't miss out on this amazing hardback book: PLEDGE NOW! 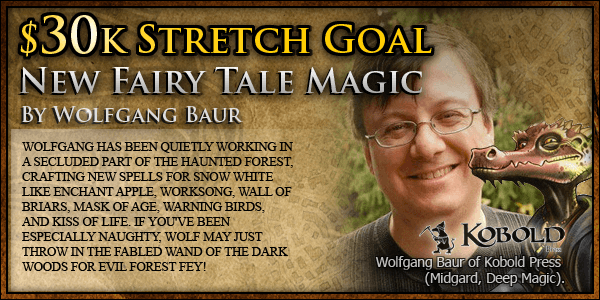