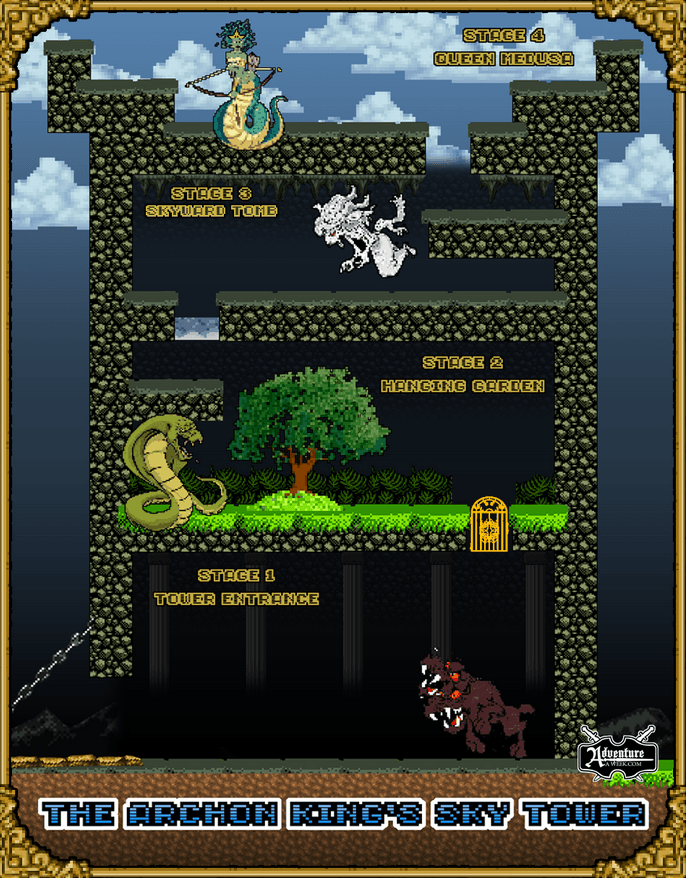 Stage 1 – The Sky Tower Entrance
The first level of the Sky Tower is the grand entrance hallway. A drawbridge gate at the bottom of the tower enters into the great hall, which is completely dark save for beams of sunlight that shine down through dozens of slits cut into the high walls. In the darkness it is almost easy to forget that the PCs are trapped in the strange 2-Bit Dimension.

The ceiling of the first chamber rises nearly 100 feet overhead and causes all sound to reverberate heavily with echo. There are no apparent stairs, ladders, or platforms leading up to the next level, but it is the only obvious means to ascend to the next level of the tower. It is blocked by a golden gate placed horizontally on the ceiling (a remnant of the original aerial occupants) but a creature guards this entrant floor. A giant two-headed golem dire hound—the beloved pet of the queen medusa—stalks the PCs as soon as they enter the darkness of the tower’s lowest level, ambushing them when they near the barrier above.

A DC 40 Perception check notices the creature before nearing the gateway, but as soon as a PC sees the golden gate (a DC 30 Perception check) it attacks. If the party flees the tower, the beast doesn’t follow them out into the open, slinking back into the darkness within the tower instead. 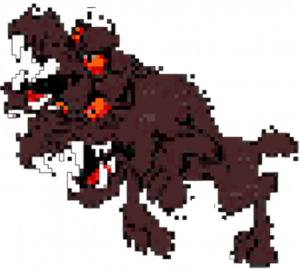 SPECIAL ABILITIES
Berserk (Ex) When a giant two-headed golem dire hound enters combat, there is a cumulative 1% chance each round that its elemental spirit breaks free and the golem goes berserk. The uncontrolled golem goes on a rampage, attacking the nearest living creature or smashing an object smaller than itself if no creature is within reach, then moving on to spread more destruction. The golem's creator, if within 60 feet, can try to regain control by speaking firmly and persuasively to the golem (DC 19 Charisma check). 1 minute of inactivity resets the golem's berserk chance to 0%.
Immunity to Magic (Ex) A giant two-headed golem dire hound is immune to any spell or spell-like ability that allows spell resistance. In addition, certain spells and effects function differently against the creature, as noted below.

[The giant two-headed golem dire hound is a modified monster build based on the Golem, Flesh (Hound). -JAM]

Suspended by a silver chain (35 gp value) around the hound’s neck is a solid gold key (180 gp value). This key unlocks the golden-barred gate that leads to the next level (a DC 50 Disable Device check otherwise). A defying orb trap suspended 10 feet above the barrier (unable to permeate it) spreads its area of effect as soon the doorway is opened; any creature sent falling (by the sudden antimagic field) can make a DC 15 Reflex save to latch onto the bars before plummeting down to the ground below.

Stage 2 – The Hanging Garden
The second level of the Sky Tower is the hanging garden—a plush landscape consisting of flowers, shrubs, grasses, and even one very large majestic tree. Stalactites on the ceiling nearly 80 feet above glow with a warm magical light that illuminates the entire area as brightly as an early morning sun. Heavy condensation formed along the stony protrusions occasionally drip down to simulate a gentle garden rain. 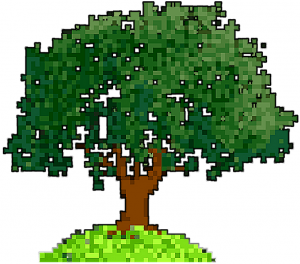 The Serpent & the Forbidden Fruit
On the opposite end of this level’s entrance the PCs find a massive tree that stands nearly 40 feet tall, covered with cursed black pomegranates. When the party is within range of the fruits’ insatiable allure, they may be drawn to the great tree. Within the branches of the tree hides a giant anaconda—another guard of the queen medusa, placed there to guard against potential intruders. 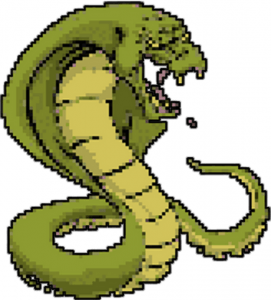 A DC 25 Perception check notices an outcropping from the wall of the tower that juts out over the highest branches of the tree, a likely place to look for an entrance to the next level, but the adventurers have to climb through the thickly leaved branches of the tree (where a giant anaconda awaits) to reach the platform.

When the giant anaconda is slain it turns to stone, plummeting from the branches of the tree and shattering on the ground. Within the rubble the PCs see a faint glimmer of gold, a sunbeam arrow.

DESCRIPTION
A simple golden ring bearing the sigil of an eight-pointed sun.

A sunbeam arrow is a pointed shaft of luminous energy that manifests from a magical ring worn by the user. It may be activated by speaking the command word (“sagittalux,” is crudely etched on the inside), but can only be activated when the user wears the ring on the hand used to draw back the bowstring of a bow. A golden glowing arrow of light appears nocked onto the string and may be fired as a normal arrow. If the sunbeam arrow is otherwise removed from the drawn bow it disappears and if there is already an arrow nocked, the sunbeam arrow does not manifest. It requires a full round action to activate a sunbeam arrow. The ring has unlimited charges to manifest the arrows.

A sunbeam arrow radiates light as a torch for the duration of its manifestation and has the same range as any normal arrow that would be fired from the same bow, however it may pass unobstructed and unimpeded through any material that regular sunlight would pass through (glass, crystal, water, ice, etc.). Once shot, a sunbeam arrow has no physical substance and is not affected by variables such as wind, a wall of force, or other types of force effects, and causes no damage from physical impact, but does cause 1d8 points of fire damage to the first non-translucent or non-transparent target it strikes. 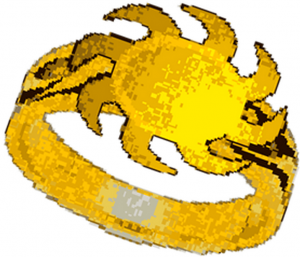 A sunbeam arrow reflects off of any mirrored surface at the inverse angle of its current trajectory (at the GM’s discretion). Each time that a sunbeam arrow is reflected, its potential resulting damage is reduced by 1d4 points (potentially rendering it unable to cause any damage if it does strike a target). If the sum of the reduction caused by reflection becomes more than a total of 10 points, the sunbeam arrow vanishes into thin air.
A sunbeam arrow may not be further enhanced or otherwise affected by magic that would alter ammunition. A sunbeam arrow itself is not magical, and thus is not affected by an antimagic field or spell resistance. Any creature vulnerable to light is affected as if exposed to a full round of sunlight if struck by a sunbeam arrow.

Stage 3 – The Skyward Tomb
The third level of the tower is a tomb containing the remains of generations of archon kings and queens; its entrance is impassable, barred by a wall of force (CL 20th). A DC 30 Disable Device check reveals that this barrier has a power source nearby (a stone relic situated out of direct sight beyond the forcefield). 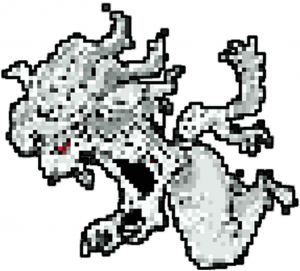 A stone statue on the ceiling of the third floor (a petrified banshee) is visible however, and the carving of the twisted crone bears a round metallic gorgon shield as reflective as a mirror. A DC 25 Perception check reveals a glowing figurine in the shield’s reflection, a small gem carved to look like a woman being impaled by an arrow.

To continue, the figurine needs to be destroyed by sunbeam arrows fired through the wall of force, reflected off of the gorgon shield (AC 30; hp 35). This simultaneously disables the invisible barrier and frees the banshee (the wrathful spirits of the desecrated Skyward Tomb made manifest) from its stony form. It drops the gorgon shield and lashes out to destroy any living creatures that enter the chamber.

Gorgon Shield
Aura moderate abjuration; CL 13th
Slot shield; Price 114,155 gp; Weight 4 lbs.
DESCRIPTION
This lightweight rounded shield is slightly concave and has a surface polished to a mirror finish. The silvery face of it is bound by a fitted band of blued steel riveted securely in place with a series of burnished bronze bolts. 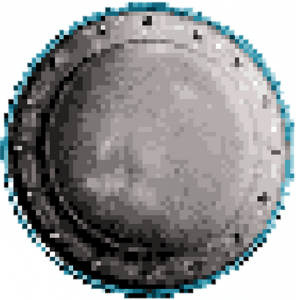 The surface of this +1 buckler can be used in any way that an ordinary mirror could be used. The user of a gorgon shield gets a +5 resistance bonus to saving throws against gaze attacks (such as flesh to stone) and on a success, the wielder of the gorgon shield may redirect the effects of the gaze attack towards another target within range of the effect (at the original DC -5) as a free action. Once per day the wielder of the gorgon shield may target an incorporeal creature with flesh to stone as if the target were a corporeal creature, turning it into solid stone for 1d6 rounds.

Stage 4 – Palisade of Clouds
The fourth and final level of the Sky Tower is the palisade of clouds—the keep’s walls open directly to the sky where a wide platform provides a majestic view of the ground below through slowly shifting clouds. The queen medusa is wearing the King Archon’s crown, lounging on his throne on the stronghold’s roof and guarded by six serpentfolk that immediately engage the PCs as soon as the party is detected. [The queen medusa’s starring in tomorrow’s Statblock Sunday! –JAM] 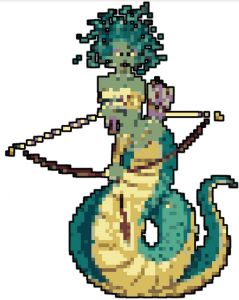 The queen medusa takes a defensive stance and doesn’t attack the PCs until her contingent of guards have been dealt with; if she is directly attacked before this point she prepares to enter combat the following round. This final floor of the Sky Tower is shrouded in an antimagic field generated by a defying orb (activated behind the queen medusa, deactivated the round before she enters combat).

Wrapping up the Sidequest
When the queen medusa is killed her body turns to stone and shatters, dropping the King Archon’s crown to the floor. The evil curse that prevented the archons from approaching the Sky Tower is instantly dismissed. and in the distance the PCs can hear trumpets sounding off, announcing the fall of the evil usurper.

The PCs have 1d4 rounds before the king archon and his six trumpet archon commanders fly to the top of the Sky Tower to greet the party. In return for ridding him of the evil queen medusa and returning his crown, the king archon honors his word—there is one place within all of Ludolog where he believes the adventurers can find their way home, and he and his commanders will escort them there.