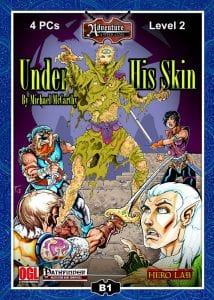 Jonathan: Michael, please tell us what inspired you to write "Under His Skin" your latest adventure module released on Adventureaweek.com.

Hi, I'm Michael McCarthy, and I'm going to be talking about what inspired me on my recent adventure, Under His Skin, and my upcoming one, It All Falls down.

Now, the former one is simple - as my first offering for Adventureaweek, I wanted to make sure it was accessible; level one, and it had to be relatable too; which is why I went with the theme of 'a wizard did it', one of the tried and true core concepts in adventure writing. There’s even a chapter named after the idea - a wizard built it - because I wanted to pass the feeling on to the reader even beyond the tower and the jungle itself.

It All Falls Down was less clear, when I started, what the adventure was going to be. All I knew is that I wanted to include one major encounter that felt like a movie scene, with the players outrunning a ceiling bent on collapsing. Why did I want that? Because, of all things, of an environmental effect in Skyrim, where a little bit of dust falls from the ceiling as you pass through a door. That's right: a particle effect.

The underground portion was based on an excellent game I played some time ago - Avernum. Each exit is guarded in its own way; dragons, hazards, secrets. But there were ways out, and the players would find them.

For anyone of you who write your own adventures, remember. Inspiration can come from anywhere, and anything could inspire you if you need it too. In a few months, my adventure To Catch a Serpent comes out, and it was inspired by a mislabeled cardboard box in a warehouse. Like I said - anything.

Jonathan:  You can read Michael's adventure "Under His Skin" and any upcoming adventures as they are released as a subscriber to Adventureaweek.com, or alternatively purchase them on RPGnow.com or Paizo.com!