View cart “Map Pack 2: Dark Days in Stoneholme” has been added to your cart.

Rise of the Drow Bundle (PDF/Print)

Even if we’re sold out here you can still get the softback on DriveThruRPG.com 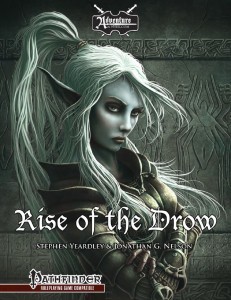 If absolute power corrupts absolutely, Matron Maelora best beware; her plans for total domination of the Underworld are already close to satisfactory completion, while attacks on the Upperworld have become increasingly successful. The other power-hungry drow families of Holoth may despise her but they know a true leader when they see one, and House Gullion has been revealed as the family to lead them all on the path to glory. With the entire Underworld in chaos and the Spider Goddess regularly communing with her chosen Matron, far greater dreams than mere regional conquest are within the grasp of the drow, as Maelora prepares her grand dark elf army for victory!

With other mystical allies standing firm with the Matron, other Underworld races beneath her heel or cowering behind fortified walls, and every drow ready to play their part when she gives the word, what could possibly stop her from achieving her final triumph and fulfilling her destiny?

But even the greatest of plans has a flaw if you look hard enough, and a party of stout heart and strong resolve can make a difference. At first, such a party may well believe it is on a smaller adventure, perhaps to win a few baubles or some small acclaim by rescuing a few kidnapped villagers. Soon, however, those adventurers will realise that much more is at stake, and that they are the ones who will need to make moves against the evil Matron Maelora and her increasing dominance if both the entire Underworld and Upperworld are to be saved. But how will they go about it? Can they ensure their own success when an entire city is standing against them? Only they have the chance to halt the Rise of the Drow!

“Rise of the Drow” is a standalone ‘mega module’ of almost 500 pages. It is designed for starters of 6th level and takes players up to around 18th level. It can be played in conjunction with “The Darkness Arrives”, the prologue to this adventure that support PCs of level 1 to 6, and “The Commander of Malice”, and epilogue to RotD that takes those same PCs to level 20.

Rise of the Drow (hardback) contains: 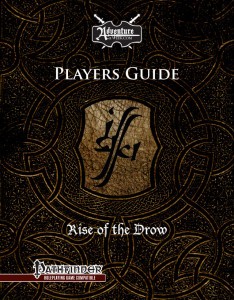 The Rise of the Drow Player’s Guide is the perfect introduction to the incredible adventure trilogy and brings everything you need to know to join in the game! 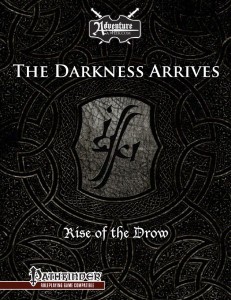 Rise of the Drow: The Darkness Arrives is a D&D 3.5 and Pathfinder Roleplaying Game Compatible Adventure that takes four to six PCs from 1st to 6th level.

This adventure may be used either as a standalone or an introduction to the Rise of the Drow trilogy (available in PDF & hardback).

The northern climes have proven difficult to cross the further the party travels, beleaguered by both the rapidly shortening days and forests that grow thicker with every mile. The ever-falling snow, whether as gentle flakes or an energy- sapping blizzard, only increase the sense of silence, darkness, and isolation. A journey between settlements of what should have been a day or two has become twice as long; everyone is desperate to reach a roaring fire and a full stew pot.

The appearance of the village, the party’s intended destination, seems perfectly timed. The locals are heading for the central cathedral and talk of warmth, light, and succor while encouraging everyone to, “get out of the darkness.” Following this advice, the adventurers find themselves in the middle of a service to mark the ending of the longest night and a return to the comfort of daylight—thanks to an ancient relic.

However the ceremony does not go smoothly as several interruptions prevent the high priest from properly fulfilling his duties. The PCs called upon to aid another band of travelers before helping drive off unexpected undead! But all of this is just the precursor to worse events; slavers appear, attempting to capture villagers and drag them away. These malicious enemies are like none seen before, accompanied by strange creatures that target the building and individuals alike. The local residents are hard-pressed to face these foes and the party proves to be a vital force in preventing a devastating defeat!

Can the PCs deal with the many problems before them, overcoming multiple challenges as an unknown enemy attacks the cathedral from all directions? Can the party face down the slavers, rescuing the villagers from a terrible fate, or will they fall for the tricks and bluffs of the mysterious humanoids that use the very darkness as a weapon? Can anyone stop this attack and prevent the remorseless, merciless Rise of the Drow?

Rise of the Drow: The Darkness Arrives includes: 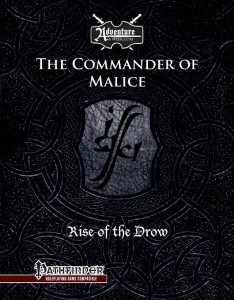 Rise of the Drow: The Commander of Malice is a D&D 3.5 and Pathnder Roleplaying Game compatible adventure that takes four to six 16th-
18th level PCs to 20th level.

This adventure may be used either as a high-level standalone or a conclusion to the Rise of the Drow trilogy (available in PDF & hardback).

The war with the dark elves may well have come to an end on one plane, but it continues elsewhere in the multiverse as the prime instigator of the upheaval and unrest manages to escape. Souls are slippery items, able to squirm between the narrowest of cracks and evade the most thorough of enemies; one favored by a goddess seemingly holds the best of cards dealt by Fate.

After the final battle in the drow’s home, the party’s foe once again finds an escape route and despair would be an easy emotion to feel—but the portal the villainous priestess used to evade the PCs after the final assault is still active, if heavily damaged, and restoring it gives one way to follow their enemy to wherever she has fled!

Pulses of sickly, acid-green light from pieces of the circle of stones tell the adventurers what their next step might be, but will they follow the fleeing essence of the priestess? First the PCs must prepare themselves after their recent hard-fought successes, and gather together the fragments of the gate to rebuild and activate it. Only then can they make their pursuit—that almost certainly means further effort from the party themselves, and possibly those around them. How many more sacrifices must those opposed to the drow make to defeat them once and for all? This may be the adventurers’ final one, as they enter the home of the Queen of Venom for one final confrontation!

Rise of the Drow Epilogue: The Commander of Malice (softcover, color) 69 pages

*Note: PDFs for all books are also included in this purchase!

4 reviews for Rise of the Drow Bundle (PDF/Print)