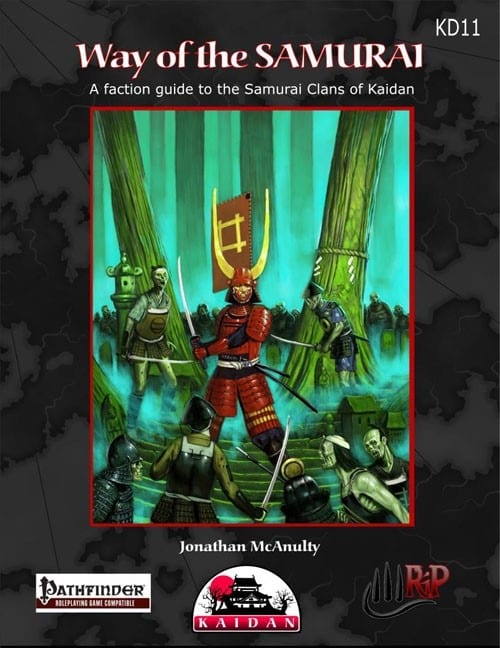 Weighing in at 52 pages, the latest oriental themed book from Rite publishing brings us an extremely detailed look into the Samurai, and all that it means to incorporate them as a class into your campaign world, both as a GM and as a player. Of those 52 pages 8 are eaten by the usual suspects (cover, OGL, ads and and appendix (for unfamiliar terms ), leaving us with 44 pages to cover the new material. Formatting follows the dual column approach, with embedded full color artwork throughout the book, and more than a few rather large pieces of said artwork. Each page is treated with a bamboo style framework, further invoking the feel of an old world fantasy oriental setting. Editing appears to be excellent, with nothing standing out or catching my eye in the ways of missteps or errors.

Paizo has already introduced the Samurai as a playable class, so what exactly are we getting here in this book? Simple, we are getting the history and culture that bred the samurai. We're being introduced to a cultural caste that goes much deeper than a mere class choice for a character. We are getting the reasons behind why one would want to play a samurai in the first place. A look into the reasoning behind where the teachings came from that originated the concepts behind a samurai's unwavering loyalty to his master, and the bizarre levels of respect they are willing to pay their enemies. What role a samurai plays in their lands and communities when there are no enemies to fight, no wars to be won...all of this and more is what this book attempts to uncover and reveal first by giving us a first hand telling of these histories and traditions from servant to master, and then by filling page after page with mega crunch. For those liking their books rules heavy and crunchy, and not to big on fluff, I personally recommend you flip straight to page 11, and start there. Not that fluff is a bad thing, but the method of delivery here is a lot of fluff, for what feels like a very long time, before you finally see anything resembling game mechanics....luckily, it is a pretty clean cut line, so those not wanting as much fluff can simply flip past it to get to the crunch....and let us discuss the crunch, shall we?

But, before we dive into the crunch, there is one thing I think is important to clear up in regards to this book. It clearly states, and I thought this odd until I really let it process, that unless specifically mentioning an archetype linked back to the Paizo player class of samurai, no other mention of samurai within this book is actually referring to the player class, but rather the social caste made up of poets, accountants, tax men, lords, monks and paladins...yes, paladins...they go by a different title, but they are what they are. As I said, this book seeks to introduce the entire concept of samurai, not merely what cinema has convinced us was reality.

The Samurai operate with an Honor mechanic, allowing for one to both earn and lose Honor points, and utilize them within roleplay as a gauge for how to treat other characters of honor, as well as how to expect to be treated. The rules for implementing the concept are fairly straight forward, and extremely easy to use. Characters outside of a clan or family should only find themselves in possession of honor points if their GM has allowed it, and even then there should be a solid reason within the character's story to explain it, as the entire concept of the honor system lies within the core of the samurai values.

For those utilizing traits within their game setting, 9 new samurai traits are presented, with such offerings as Practiced Calligrapher (gain a bonus to Craft(calligraphy) and Linguistics), Legacy of Death (having come from a long line of samurai who have given their lives in battle, you seek to do them honor and rush headlong into danger, grants a bonus to initiative), or Honorable Soul, which allows for a higher calculation of figuring our your honor points.

Teppou Bushi is our first archetype, and it is an archetype for the gunslinger. The gunslinger you say? Yes, in a samurai book, remember, this book approaches the samurai as an entire buke caste, not just a solitary class. The teppou bushi suffer a penalty to their honor to demonstrate the suspicions that come from fellow samurai who look at them as nontraditional and unworthy, forcing them to work harder to earn their place and the recognition they seek.
The paladin finds itself represented within the Yamabushi archetype, the divine warrior monks. Serving within the setting of the game mechanics primarily as spiritual leaders and counsel to the heads of clans and family organizations these warrior monks occasionally leave their mountain retreats to travel the world battling evils and righting wrongs.
The ranger shows through in the archetype Yojimbo. Yojimbo function equally as well alone traveling as a solitary warrior policing their lands, or within a structured unit of fellow warriors, and are looked upon as some of the hardiest of all samurai. Taking an enemy clan instead of a favored enemy, and replacing hunter's bond with warrior's bond (choosing either weapon or mount) are but a few of the differences from the base class for this archetype. This also marks the first major editing oddity, as the text halfway down the first column drops down a few points in size, goes back to standard at the top of the second column, then drops down again. I can only assume it is intended to do, but it looks very odd visually.
Our last four archetypes are all for the Samurai base class, the Kuge – those born into wealth and power, the Tajiya – a true master of the two blade style, the Tajiya – those dedicated to ending the scourge of supernatural foes plaguing the world, and the Yabusame – the true traditionalist, the bowman.

From the archetype we go to three new orders of samurai, the Shogun, the Tajiya and the Undying Emperor. Each order giving its own list of perks for aligning oneself alongside.

The Wizard archetype Onmyoji was by far the most interesting thing in the entire book for me, as it is a variation upon the classic wizard that I have never encountered before. Studying much as their western counterparts do to get their spells after sleeping, the Onmyoji fold their spells in origami, that is then consumed in flames by the casting of the spell contained within the paper structure...feeling more true to older edition concepts in regards to scroll casting, but allowing this particular wizard to maintain these spells day in and day out, the idea rather appealed to me. Visually it is a very cool concept, but I can not help but wonder, when it comes to an adventuring version, where do they keep all that paper they would have to keep on hand once they get a decent level, lol. Replacing arcane bond with Shikigami Bond, this archetype also gets a rather cool familiar, in the form of an oni known as a shikigami (think Asian goblins).

Following this we have two new prestige classes, the Bugyo (a government official with a rather large amount of authority), and the Mosa (a samurai known for refusing to back down, despite the odds, and carrying the capacity to win the day through sheer determination and tenacity).

From there we get into the rules pertaining to the creation of a samurai clan, and all the intricacies involved in that...the naming, the crests, the statblock (similar in nature to a communities statblock). Presented following this section is a fully realized example clan, with map and NPC's, to better demonstrate how to utilize the rules for clan building. It is within the NPC listing that we find a new cursed magical item, the Gaki Helm, a kabuto helmet that will allow control of ghouls, but will also allow the evil spirit living within the helm to corrupt and control a wearer.

The Appendices wrap it all up with a full statblock write up for the Shikigami, as well as a statblock for one as a familiar in the first, the second being a list of terms and their definitions, for those unfamiliar with a great deal of the terms used throughout this work.

Final thoughts...for those playing within the Kaiden setting, or any Oriental high or low fantasy setting, this book is a must. It adds so many levels of depth to the idea that is samurai that it in itself becomes a solid sourcebook, with many potential avenues for adventure hooks and ideas. For those not looking to add the oriental myths or classes to their gaming worlds however, there is very little here for them, but any book entitled Way of the Samurai should have that expected of it, and if you are still reading this I doubt that is an issue. Other than the smaller font size a few times (which I think was intentional, just odd looking) I can think of nothing to really complain about regarding this book, and encourage GM's and players alike to add it to their collection. A solid 5 stars, well earned and deserved.