DESCRIPTION
Suspended from a simple knotted sinew cord, this intricate amulet has been crafted from a combination of gold, copper, and electrum. Each face of the palm-sized talisman is opened and securely sealed behind a lens of clear quartz crystal that exposes a strange stone-like object (a petrified karz slug gland) floating in quicksilver. The bottom of the amulet is a clear crystal beaker, and the front is adorned with three spherical gemstones: one sapphire, one ruby and one emerald. The reverse boasts three small holes that appear to have needles tucked securely within.

* Rolls for additional arcane effects do not stack. If this option is rolled as a result of a previous roll, assume whichever option allows the most additional rolls as the new total number of effects to be randomly determined and roll again. When rolling for multiple arcane effects in a single activation of the quicksilver amulet, if the same effect is rolled more than once, roll again for a different power. 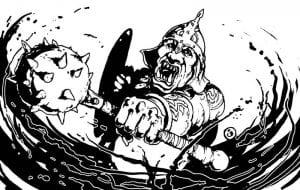 When activated there are strange sensations as the user is affected by various sorts of madness. After each activation use the following activation sensation chartto determine what the particular sensation (and associated mental effect) is for the activation:

Note: Multiple mental effects from multiple activations of the quicksilver amulet are stacked for the longest duration.

First, a special oil that induces the karz slug gland contained within the item must be slathered upon the creature’s chest. This oil is created using the slime of a karz slug that has been fermented for 2 weeks (DC 20 Spellcraft check). Once the oil has been applied to a user, the quicksilver amulet has to be activated upon their chest while permanency is simultaneously cast upon it.

HISTORY
The quicksilver amulet was first created by the alchemist known as Vyn Durgrugan, the Slug Hunter of Dar’Spelun Slugmarsh. He crafted it while investigating the strange abilities of the karz slugs that inhabit the caverns near the Shroudstone, caused by their consumption of the flora and fauna surrounding the mysterious locale. He was never satisfied with its functionality as the quicksilver amulet also inherited the adverse effects that are common maladies where the veil between sanity and insanity is faint. The instructions for its creation can also be found in Vyn’s alchemical formula journal.

DESTRUCTION
The quicksilver amulet has a built-in self destruction contingency. Casting the permanency spell upon it shatters the amulet, and reduces the karz slug gland within to dust.