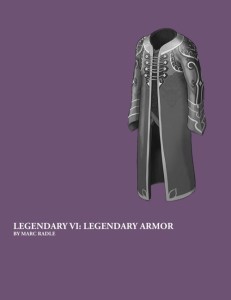 Weighing in at 33 pages (with front cover, ToC, and just over 2 pages for OGL) this PDF delivers roughly 28 pages of new material for the Legendary series from Purple Duck Games. The sixth book in the series, the focus is on those suits of armor that never fail to inspire the grandest of tales, and the most epic of songs, I speak of course, of Legendary Armor. The suit, found bathed in a beam of sunlight, sequestered away from the world, awaiting that perfect someone, in short that suit we as players all secretly hoped our GM's would someday place within our path.

First thing I noticed looking through this PDF was the inclusion of art for every suit of armor. Not only is every suit fully described and detailed with its own fluff and crunch, but you will be left with no doubt as to what the author of this work (Marc Raddle) had in mind when he designed these items. And what of that illustrations? Tamas Baranya was the artist, and did an excellent job in translating and interpreting these suits into visuals that are excellent. All art is done in a B&W color scheme, with a comparable stance for each suit reminiscent of a department store mannequin, with at least one suit sporting a “blank face” as if to show the armor on a tailor's dummy.

Starting with an introduction, the author explains that while legendary treasures have traditionally always come with a hefty price in the form of quests, loss of abilities, etc. around his game table they have devised an alternative. Offered within the introduction is an alternate means of allowing the armor to advance as a character builds in levels, utilizing what I can only think to describe as “prerequisites”. Personally, I really like the idea, and think it helps to keep a balance on items of this nature, while allowing them to grow organically within the structure of a characters lifespan and career.

We are presented with fifteen new armors here, all of them unique in their own way. Assassin's Chain granting several abilities to enhance the effectiveness of a silent and stealthy killer. Next up is Battlecaster Armor which is presented as a custom suit of chain leggings and sleeves crafted by the first magus. Of it's abilities, perhaps the one that grabbed me the most and made me want to drop this into my campaign world is an ability that would allow a caster , while wearing the armor, to expend a spell to harness the raw magical energy into a melee weapon. Upon a successful hit with said weapon, that energy translates into additional damage dice based upon the level of the spell originally expended.

Beggar's Feast won out as my favorite suit out of this collection, and I think it had more to do with the story behind it and the way it is depicted via illustration than its actual abilities. The suit was crafted by a prince after he finds himself denied access back into his father's palace. Alone and forced to live amongst the filth he had looked down upon he adapted, and became a folk hero, determined to feed his new “kingdom”. The suit itself is a ragtag mismatched suit of padded armor, but with it the prince fed his subjects thanks to the abilities the suit gave him the capacity to use.

Blood Drinker gives us our first suit of armor from the other side of the alignment pool. A spiked suit of dread plate with a penchant for bleed abilities, this one just screams for an anti-paladin NPC on so many levels. Champion's Plate gives a serious nod of love to the horseback knights out there, and even ups the ante by giving access to a draconic mount (for amounts of time limited to the wearer's level). Healer's Hand reminds us that armor can be worn by those seeking to heal, as well as harm. Kama-Xia is the first truly unique suit of armor in that the design is unique enough it earns the first full chart for armor bonus/dex bonus/armor check etc. Basically a mail on leather coat, the design concept is strikingly beautiful.

Kelgror's Ghost I can honestly say was the first suit I read in here that I immediately knew which player I wanted to grant this to within my current playgroup, and literally had to stop reading to jot down some ideas on how to introduce it into my game. It is also the first suit that, as far as layout decisions went, brings up my first complaint. The chart depicting the growth of the suit as it and the wearer increase in levels is split across two pages. Now, technically there is nothing wrong with that, and I know it is a matter of personal taste, but I have never been a fan of splitting charts and tables, as there is always a layout decision that will allow it to stay together for the flow of reading.

Landshark's Hide takes the concept of hide armor down the path of the bulette, after all, who says all hide armor is made the same? Mage Hunter's Armor is the perfect suit for those looking to do some serious damage to spell chucker of the arcane variety. Granting it's wearer several useful spell like abilities all aimed at identifying and stopping arcane casters, as well as granting Spell Resistance, this suit would work very well within a campaign world for those tasked with keeping wizards in line. Minstrel's Boon, a leather suit, expands the performance capacity and knowledge skill check success rate of it's wearer, as well aiding in protecting a bard from those pesky silence spells, as well as blindness and or deafness.

Oak Heart's Armor marks the second suit unique enough to need gear stats as it is a suit of wooden plates over leather armor. The wood having been taken from the burnt body of a treant, the armor grants several abilities to its wearer that would please any druid. The pinnacle ability of this armor is its ability to summon forth the spirit of the treant from whom the armor is made. I fell in love with this suit, I can not lie. This suit, it's history, is exactly how a GM rewards a player for doing a druid justice. Seducer's Silk is the third unique build for a suit of armor, this being a ceremonial suit of silk armor, complete with full armor statistics and a host of abilities to make those around the wearer more than happy to be complaint with pleasing the wearer. Triton Scale allows a land dweller to function as a force to be reckoned in an aquatic setting, granting movement and the capacity for breath, as well as a few impressive tactical abilities.

Vrithmytrix's Bane gives us the obligatory dragonhide suit, this one being of a black dragon. Granting claws, wings and a breath weapon attack, the suit carries some serious firepower with it. It did however end up on my wrong side, as it, like Kelgror's Ghost has it's advancement chart split across two pages. I know, I know, I'm picky, lol.

So, final thoughts.....Other than the two charts spread across two pages, I found four other editing missteps. All of them minor, a missing “the” here, and extra “a” there, and two instances of a letter being left off of a word. Like I said, minor, but editing mishaps none the less. The material was well written, and designed with the concept of making truly memorable items to add to a campaign world. The art was way above par, and a welcome addition. Balancing the editing and layout issues with the material presented, I am going to go with a 4 BOG TROLL HEAD rating, and highly recommend this product to any GM looking to add the presence of legendary armor to their world.