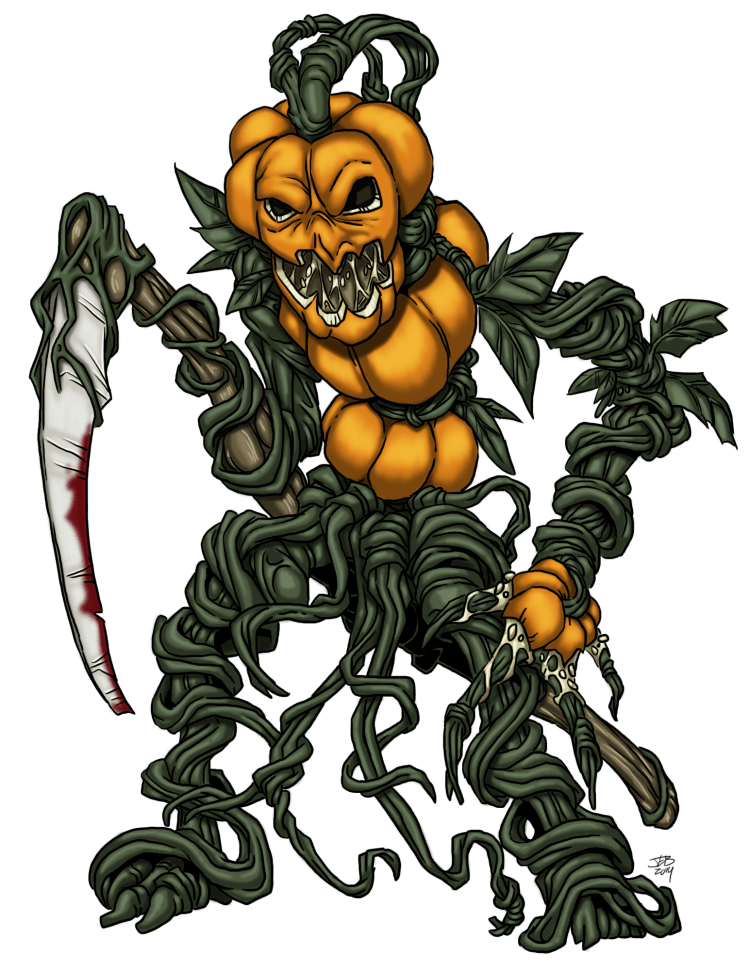 To celebrate the life of our dear friend Joshua Gullion, this week's blog entries are based on one of his favorite creatures from the many he designed.

TACTICS
When acting as a guardian, the pumpkin golem keeps to the ground, looking like nothing more than a small pumpkin patch. It rises and uses its frightful presence and fear aura while attacking with its scythe. Once a target is prone, it uses its slam attack to pulverize the victim.

ECOLOGY
Environment any
Organization solitary or gang (24)
Treasure none

A pumpkin golem is crafted from pumpkin gourds and the vines upon which they grow, assembled into a roughly humanoid body with articulated limbs. A favored golem amongst the arcane community lower on the financial scale for the ease of securing the raw material at an easy cost, the pumpkin golem is typically crafted within the patch that its raw components grew. A pumpkin golem stands 7-1/2 feet tall and weighs on average between 300 to 400 pounds.

CONSTRUCTION
The pieces of a pumpkin golem are assembled from vines harvested fresh from a pumpkin patch, with their gourds still attached. The gourds are woven throughout the vines, with one each for the torso and head of the golem. The components are dusted with a mix of rare powders and herbs worth at least 500 gp.
CL 12th; Price 9,000 gp

SPECIAL ABILITIES
Immunity to Magic (Ex) A pumpkin golem is immune to any spell or spell-like ability that allows spell resistance, with the exception of spells and spell-like abilities that have the Fire descriptor, which affect it normally. In addition, certain spells and effects function differently against the creature as noted below.
- Warp wood or wood shape slows a pumpkin golem (as the slow spell) for 1d6 rounds. (no save)
- A plant growth spell heals the pumpkin golem for 1d6 points per caster level.
Frightful Presence (Ex) The very presence of a pumpkin golem is unsettling to foes. Activating this ability is a free action, usually done as part of an attack or charge. Opponents within 30 ft. who witness the action must make a DC 14 Will save or be shaken for 5d6 rounds; creatures with 4 Hit Dice or fewer are panicked instead. This ability does not work on those with more Hit Dice (8) than the pumpkin golem. An opponent that succeeds on the saving throw is immune to that same golem's frightful presence for 24 hours. Frightful presence is a mind-affecting fear effect.
Fear Aura (Sp) A pumpkin golem may activate its fear aura three times per day. This aura manifests itself visually as an arcane flame erupting from within the golem's "head", shining a sickly, flickering light from its eyes and mouth. The flame is a prestidigitation effect and causes no damage; in all other regards this acts as a fear (DC 17) spell.

Pumpkin golems were the favored guardians of Mad Mage Hensley. Those intrepid enough to wander near to the mage's mansion would often be found screaming in fear, reporting that a walking mass of vines with the flaming head of a pumpkin was the last thing they saw. Rumor has it that the disappearance of Hensley's Mansion, together with its mysterious reappearances on harvest moons was the result of Hensley trying to create an army of these golems for some unknown nefarious purpose.