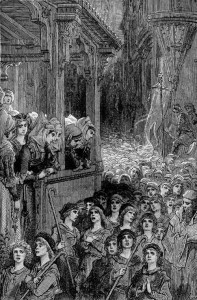 While I've been to conventions before (Otakon being prime among them) I've never had the pleasure of going to one devoted to entirely to gaming. Everything I've read tells me that my expectations will be defied and that it's too much to absorb in only four days.  The people I ask tell me either to make no plans or stick to panels and discussions.

To put it succinctly, I am utterly ignorant about what's going to happen next.

Travel arrangements have been prepared, the hotel reservation was made weeks ago, my tickets and badge have come in; the stage is set for what I expect to be a momentous occasion. During the convention I'll be taking copious notes about my experience as a first timer at GenCon and am going to do my absolute best to grab some good photos along the way (albeit on my phone).
-----------------------------------

So it turns out they were right; it's far too much to take in all at once. The vast majority of my time was spent talking to publishers and attending seminars, some of which I cannot talk about. However, I do have one that I can talk about and my notes from the event are below.

With the correct atmosphere and approach an encounter with an otyugh can be just as death defying and harrowing as the raid on a red dragon's lair.

The rules are a social contract; if you want to be respected, you have to respect the players in turn. If you're hearing this - "The rules aren't as written? How do I know what they are?" - then you've bent things too far out of shape and need to reassess (and possibly apologize). This doesn't mean you aren't the GM anymore (indeed, you are the ultimate arbiter of rules) it's instead a reminder that respect is a two-way street; don't cause a traffic jam with your ego.

This is a particularly good one; of course you need a traps guy to get through the dungeon hall but engaging in teamwork to succeed on a given task isn't the same thing as actually making a team effort throughout the gaming experience. Think about it.

Not only does this make the world more believable (for both you and your players), it gives them an incentive to treat NPCs like real people; while I haven't killed, robbed or otherwise been malignant to anyone in real life, I understand there are serious (and sometimes innocuous) repercussions for doing so.

7. "Failure can be the cost of success."

Sometimes this means the players fail and sometimes it means you fail; either way there's plenty of learning to be done. Don't allow the party to enjoy victory every time (indeed, our highest moments are often mirrored by our deepest depths) and don't beat yourself up if some well-laid plans get thrown to the winds. Take away what you can from the experience and be better for it next time through.

The 2 Rule - A general, situation-based bonus/penalty to ensure game fluidity.

Did you really need the fighter to make it over the ledge? Grant him a +2 bonus for some equipment that fortuitously snagged on a rock and can be briefly used as a point of leverage. Was it important that the lich not get disintegrated? Give out a -2 penalty to the Spell Resistance roll because of its proximity to a potent magic item. While this shouldn't be abused, don't let your excellent story get bogged down by some unexpected dice rolls and implement The 2 Rule instead. 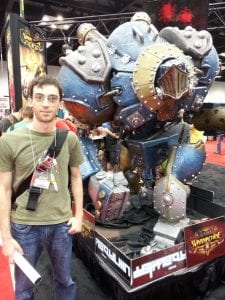 I also snapped a few nice photos - the gentleman that co-stars in some of these is my primary playtester (and chief minion), a fellow named Dixie Carr. His talent for enduring the trials of my adventures is matched only by his excellent talent for providing scale in a photograph. 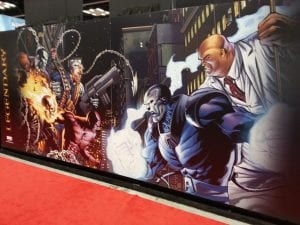 Of course, I didn't ignore the gigantic spider queen by the D&D Next Booth. For whatever reason, Dixie is not overly concerned with his imminent demise; some players just never learn. 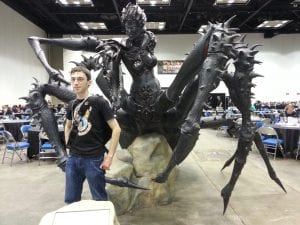