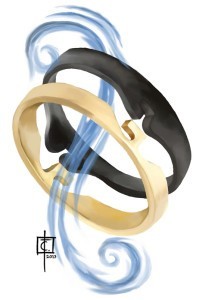 This beautifully crafted ring is actually in two parts - one is onyx black, the other sterling gold. Each miniature circlet is infused with a light cyan energy that entwine's the wearer's finger.

A character that makes a Knowledge (history) or Knowledge (local) check to learn about the ring of exuberance identifies the following fragments of lore:

DC 10     Halflings are responsible for first creating the ring of exuberance with the aim of winning a grand race between villages. The rivalry was so great that a retired adventurer from one of the settlements crafted the enchanted ring for no purpose other than this race.

DC 15     The original creator was actually a half-elf. Having grown up with the halflings, the otherwise-outcast actually made the ring of exuberance to assist the burgeoning courier business of a longtime friend.


DC 20     Katra the half-elven wizard became the defender of the settlement through unlikely means - when attacked, the fleet-footed courier service quickly relayed messages about the guard and their alacrity saved the halfling town time and again.

DC 25     The magical craftswoman wasn't the only retired adventurer; unbeknownst to the half-elf, her longtime friend Jerry Draggletuck was also a retired adventurer. Having taken to the art of thievery, he soon found that his retirement was constantly disrupted by many individuals he had stolen from or cheated throughout his lucrative career. Reluctantly, he used half of his funds to convince his childhood friend to craft relatively cost-effective rings that would enable the settlement Jerry called home to defend itself effectively.