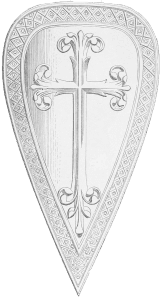 This long kite shield is obviously designed as part of a heavily armored warrior’s garb – its thick frame lends it to warding off momentous blows from the heartiest of opponents. The metal gleams brightly and a beast wrought in scarlet is emblazoned across the front.

Drekon's Kite Shield is a +1 light fortification heavy steel shield that glows with a faint eldritch twinkle (this item has no effect which illuminates its surroundings.) Should the owner of Drekon's Kite Shield possess a lawful good alignment and the same divine patron as the holy symbol displayed on the shield (chosen by the GM), the bearer may gain a +1 bonus to their next saving throw, attack roll or skill check that round up to three times per day (activating this ability is a swift action).

DC 15     This enchanted shield was first crafted for the powerful paladin Sir Drekon Galidnus, a gift from his order to aid on his divine crusade against the leader of the foul goblins that continued to swell up and burst out of the nearby mountain range.

DC 20          Sir Drekon had been found wanting in a protracted conflict against an ancient cult of cannibals known as the Bloodthirsters (themselves led by a vampire). Unable to lay the berserkers low, he was badly wounded in a major confrontation and forced to withdraw from the combat; seeking solace and atonement in an abbey of his divine patron, the holy knight was provided with his divine mission by the arrival of an angel bearing his patron’s own words. Sir Drekon was to enter the mountains and find a powerful blackguard named Sislono Nislan; his duty, to slay the corrupted warrior in single combat.

DC 25      Aided by his allies (and their powerful magical protections) Sir Drekon spent weeks scouring the mountainside searching for the object of his divine mission, slaying scores of the foul greenskins that called Sislono Nislan 'master'. The paladin and his companions eventually cornered the foul blackguard inside of a massive cave complex where an epic battle ensued. The holy warrior's mission rang true as he struck his opponent a mortal blow, but in the moment of Sir Drekon’s triumph over the depraved Nislan a goblin sniper shot the victorious hero in the back with a poisoned arrow, felling the great knight and causing his allies to flee. Neither the paladin's remains or his fine equipment have ever been recovered.