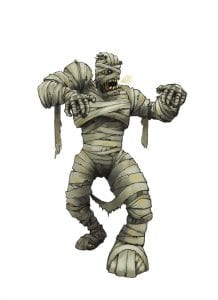 DESCRIPTION
These worn cloths are yellowed from decaying and accumulating dirt over the course of centuries. They smell damp and vaguely of the dead, giving off an almost palpable aura of the unnatural.

When under the light of a full moon, anyone wearing the linen of the chosen finds their skin shrink, their organs constrict and their bodies wither as they transform into a mummy. The user's type changes to undead, they gain darkvision 60 ft., damage reduction 5/—, and light blindness, all of their movement speeds decrease by 10 feet (minimum 5 feet), and they become vulnerable to fire. In addition, they also gain a slam attack as well as two supernatural abilities: mummy rot (Fort DC 10 + 1/2 HD + Charisma modifier) to all their natural attacks and an aura of despair (30 ft., paralyzed for 1d4 rounds, Will DC 10 + 1/2 HD + Charisma modifier).

These effects are the most apparent of the enchantments granted by linen of the chosen - whenever a creature wearing this activated magic item appears in direct sunlight the many cloth strands burst aflame (dealing 1d6 fire damage each round - Reflex DC 15 to put out while inside a shaded area). Moreover, while under the enchantments granted by linen of the chosen, the wearer is immune to aging (although any age penalties and bonuses upon transforming into a mummy remain). When removed, the user is restored to the same age they were when they first donned the linen of the chosen. if the wearer is reduced to 0 hit points while under the effects of this magic item, their body turns to dust and the enchanted wrappings fall tothe ground. Any attempts to remove the linen of the chosen fail unless done under the light of a full moon. Even after they have been removed, however,the former wearer continues to suffer from light blindness until they have received a regeneration spell (this removes the light blindness for 24 hours).

HISTORY     A character that makes a Knowledge (nobility) or Knowledge (religion) check to learn more about linen of the chosen identifies the following fragments of lore:
DC 15     Linen of the chosen are often gifted to only the most talented and dedicated viziers or councilors, entombed with their ruler to further assist them in the afterlife (or ensure that their return is unimpeded). Unfortunately, many of these devoted servants grow mad as the centuries pass, prowling their prisons in search of an escape or something to vent their frustrations upon.
DC 20     More than one passing pharaoh has endeavored to extend their rule through the use of linen of the chosen, only to recoil from the almighty sun upon exiting their intended place of rest.
DC 25     These embittered undead reign on regardless, forming empires of shade that quickly turn as dark as the respite they offer to their denizens.
DC 30     The truly devout quickly gather to route these settlements, seeking to curb the affront to the realm and natural order before the next full moon while the truly mad seek them out to gain the linen of the chosen for themselves.