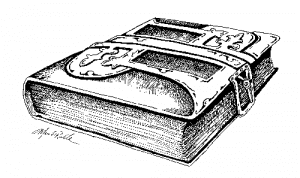 This small leather-bound book is filled with blank paper but its worn edges and cracked spine make it look as though it were written in every day.

The manifest of Seawaleg is a writing pad; inscribe where you want to go and the enchantment inside the magical book aids you and your companions when traveling great distances. Knowledge of the region in question is deposited in the writer's mind and they become aware of locally known short-cuts, back doors, passwords and effective places to hide (the exact details of this information are determined by the GM). Using a manifest of Seawaleg, it is almost impossible to become lost because the user always has a hunch on where they mean to go (allowing them a DC 22 Sense Motive check to discern the next direction to head toward).

The owner of the manifest of Seawaleg develops a craving for beer after using it three or four times but aside from the penchant for adventure many of its owner's have become ensconced with, the enchanted book has no truly ill effects.

History     With a successful Knowledge (local) check, bits of the manifest of Seawaleg's lore are revealed to the PCs; how much is determined by the following DCs:

DC 20     This item was originally created by the infamous thief and accomplished wizard Seawaleg. Once a lowly pirate, he built his own fleet of notorious vessels utilizing ships that traveled the sea at impossibly swift speeds.

DC 25     Seawaleg was killed in an explosion at his lab about 150 years ago, and since then the various investigations into his affairs (both illicit and sanctioned) have turned up very little; no one could claim to know what became of his coveted manifest.
DC 30     There were actually a total of eight manifests of Seawaleg made, one each given to his most trusted henchmen to help gather difficult to find spell components, make deliveries, and attend secret meetings.
DC 35      Seawaleg forgot he was carrying one of his signature tomes when he attempted to use a portal to the Outer Planes (to disastrous effect). No person yet has been unfortunate or foolish enough to repeat his error, but the ultimate result certainly isn't promising.