Effects When the lightning gas haunt is triggered a nauseating fog cloud arises from the swamp, the vapor tinged with flashes of electrical pulses (almost like a miniature storm). Creatures within the lightning gas haunt’s area are subjected to the effects of a stinking cloud spell (Fort DC 17, CL 8th) and additionally, once per round a single random creature within the area is zapped by lightning (+16 melee touch, 2d8 electricity). 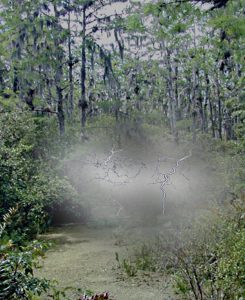 Destruction A lightning gas haunt can be permanently destroyed by an inward-focused casting of magic circle against evil or magic circle against chaos while it is active (binding the spirit of the dretch, preventing it from escaping), followed by a dismissal at the bound spirit in the center of the haunt. This permanently banishes it and ends the apparition, releasing 1d4 will-o’-wisps as the dretch fully exits the Material Plane.

Background While escaping a party of Bloodclaw hunters, an unusually smart dretch forged an alliance with some will-o’-wisps deep in the Vast Swamp. Being resistant to their attacks the demon simply laughed at their efforts and the tiny undead became curious as to why a seemingly lowly creature could resist their attacks and show no fear. The will-o’-wisps, with their need to feed on the terror of others, joined with the dretch as it harassed the Bloodclaw tribe, working in tandem to isolate the weakest savages before whittling away their will to live with stinking cloud and negative energy.
Though a reliable tactic, eventually a youngster managed to escape the ambush and informed the tribe of a small, obese creature directing attacks by the swamp lights. The Bloodclaws immediately mobilized their most experienced hunters and over the course of a few days managed to trap the dretch and its will-o’-wisps by surrounding them deep in the bogs. A shaman managed to prevent the dretch from escaping and proceeded to inflict a slow and torturous death on the demon in revenge for the untold misery it had inflicted on her kin, and all the while the will-o’-wisps fed on the powerful fear released by the dretch during its torture. A portion of their energy has forged itself with the dying evil curses of their master, gathered into a deadly haunt that can appear at any place within the swamp (though it tends to manifest at the edge of marshy areas close to roads, trails, or settlements.)