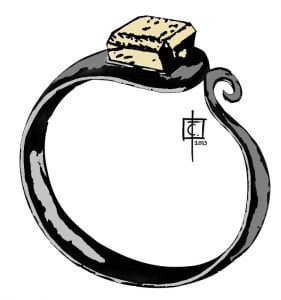 DESCRIPTION
This simple iron band is topped by a curious ivory stone that glitters in the night.

Every time one of the magic of one of these rings is activated, it twinkles with a brief illumination of starlight. In addition to replicating the effects of a ring of feather falling, the lesser shining star can be used three times per day to grant the user a Stealth check while under observation. This check is made at a -5 penalty, and afterward the wearer may take a single 5-foot step; after that, moving to any square breaks the effect, as does any violent action (just as if the wearer were under the effects of invisibility).

HISTORY
Success on a Knowledge (arcana) check to learn more about the lesser shining star reveals some facts about the unique item’s lore:

DC 15     These enchanted rings are valuable and powerful aides to any adventurer, but many claim they are cursed—by what exactly none will way, but they are rarely seen in the marketplace for very long, if at all.

DC 20     Rumors posit that lesser shining stars are actually cursed by the celestial tapestry so far above. Their tendency to sparkle in starlight affirms this notion and many of the tales about unfortunate deaths seem to coincide with the movements of the heavenly bodies.

DC 25     The true origins of these enchanted rings lay with the Sideribus Volunt, an order of wizards from long ago, but this does little to explain their unfortunate curse. While powerful mages, so much of their history is lost to time that none can fathom why their creations would wreck havoc on those who wear them.

DC 30     Particularly well-connected fences and dubious thieves’ guild leaders are the true reasons so many adventurers die while wearing a lesser shining star—an enigmatic group known only as P.R.A.N.K.S.T.E.R.S. goes out of their way to collect each and every one of these magical rings. While they won’t pay as much for them as most would prefer, refusing to part with the enchanted band is a sure way to seal one’s fate.