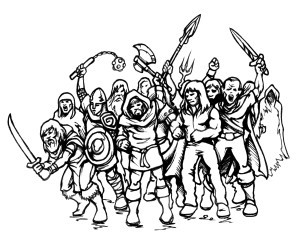 Preparations in Steamtown are in full force: one more mountain is all that remains before reaching the easier, flat terrain on the proposed route. In order to get through the last few miles however, demolitions teams have their blasting work cut out for them. Unfortunately a few papers have circulated this week declaring the blasting area as a goblin burial site. Up until now the workers have been misled, thinking that the tracks were going to circumvent the sacred ground instead of going straight through them—nobody has gone out of their way to change this misconception.

Now, as it becomes obvious that the tracks are going straight through the area, the goblins have stopped working and gone on labor strike. The normal bullying and coercion tactics have not worked; the workers are more afraid of divine retribution than any punishment that PNE can deliver. The goblins have set themselves up blocking much of the construction equipment, refusing to move until the path is changed. PNE has tried and failed to convince the laborers that the path actually does not go through the area—even though it does. Borys has sent in a squad of enforcers, prepared to assault the goblins should they hold up progress when the time comes to send up the blasting party. Even though it would delay them a bit, PNE can always bring in new goblins.

Borys and two enforcers wake the PCs up early in the morning two days before the blasting is scheduled to happen—he has an urgent request for the party.

"You see, my friends, we really are going through the goblin burial ground, but we decided to move it a mile north. A party went up three days ago to transport the remains, some of my most trusted men—they have not returned. I have another party ready to go, but they may need protection, no? I don't think I need to tell you what would happen if this fails. I have no problem disposing of the trouble makers, but replacing them costs time and money. So, I think, you can see my predicament."

If the PCs agree to help, they leave right away. Borys offers 2,000 gp worth of alligotonium [explained in full later this month! -MM] as a reward. The work crew (made up of six human fighter 2) joins the party near the track outside of Steamtown where a small, supply-laden hand cart awaits. It takes about 3 hours to reach the end of the tracks, and another hour on foot to reach the blast site.

As the party nears it, the terrain rises sharply, made up of several loose rocks and small boulders on the steep hillsides. PCs that make a DC 25 Perception check notice something sticking out of a large pile of dirt and rocks. If the party investigates they find a booted foot; clearing the dirt reveals the work party that had been sent out before, killed by a landslide. A DC 20 Heal check reveals that some of the wounds could not have been possibly made by the landslide, as if something large had bludgeoned them to death.

From here, the burial area is about 1/ 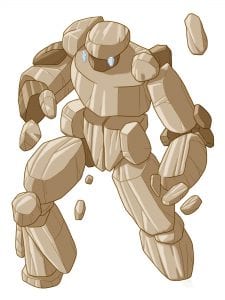 4 miles away. When the party gets about halfway there, the side of the mountain begins to shake as several rocks and boulders roll down the hill.

On the heels of the collapsing hillside, a huge earth elemental uses its earth glide ability to hide in the avalanche and try to surprise the party. Anyone that fails a DC 19 Perception check is surprised by the elemental as it emerges from the cloud of rocks and dirt.

Once the elemental is eliminated, the party finds a small shrine and a few graves; it takes approximately 4 hours to relocate everything.

When the burial site is successfully moved, the goblins end their labor strike after their foreman verifies that the path does not go through the sacred site. Otherwise, there is a 2 week delay as the protesting workers are killed or run off, and more are shipped in from the Samsara area (unaware of the sanctity of the site, though if the elemental is still there, it attacks the workers when they arrive).

The morning after returning to Steamtown, the Steamtown Herald is delivered to the PCs' caboose. The headline reads, "A Scourge Descends on Pradjna as Blasts Open Up a Pit From Hell"