Thanks to Cory Vickruck for the inspiration.

Darth Vader.  Hannibal Lecter.  Jason Vorhees.  Freddy Krueger.  The Terminator.  All memorable villains.  Why are they memorable?  Because we get to learn about them.  Who they are and what they want.  Where they're from and how they got their start.  By giving the audience information, they make the villain a character instead of just a scare machine.  Okay, Freddy and Jason may be scare machines, but we know how those characters came to be.

Villains, as much we hate them and want to see them get their comeuppance, we love to watch them.  When they are played correctly, they leave a lasting impression on the audience.  Villains are also necessary.  Without villains there can be no heroes.  But what makes a villain hate-worthy?  Why do your players want to get the bad guy so bad?

In today’s Critical Hit to the Blog, I’ll be discussing how you can create a memorable villain that your characters will hunt to the ends of the earth.  To do that, we’re going to look at the classic questions of Who, What, Where, When, Why? No, not them. But that jacket is pretty villainous.

My villain is named Lord Fauntleroy D’Evil (may or may not be his real name).  We have a name now, but who is Fauntleroy?  Fauntleroy is a relatively high-ranking (8th to 10th level) Lawful Evil Cleric of Asmodeus who is currently under the disguise of a Lawful Neutral Cleric of Abadar, acting as a Judge.  By using the Law domain, Fauntleroy is able to keep up the pretense of Judge while influencing the flow of money that the worshippers of Abadar are likely to have.  One thing to keep in mind when determining the “who” is alignment shift.  Fauntleroy may have started out as Lawful Evil, but given his role as Judge and maintaining his cover, he may shift to Lawful Neutral unintentionally and without realizing it and.  He’s not necessarily in any trouble with Asmodeus, as he’s still one step away in alignment. Maybe they just want to be famous.  Or maybe they were bullied as a child and are now bullying others.

Once you’ve figured out their motivation, I would suggest doing a little research on the psychology of your villain.  Find the basics of why a megalomaniac acts the way they do.  It will take your villains and make them just that little bit more “real.”

Fauntleroy’s goal is to be filthy, stinking rich since in his mind, once you have money, you can buy women, fans, and fame.  By influencing the flow of money, he makes sure that quite a bit of money ends up in his own pockets by adding on interest payments and late fees to be paid through him.  These additional payments rarely make it to their intended recipient.  He uses his influence on a less than knowledgeable populace, but if push comes to shove, he has no problem upping and relocating to another remote village to continue his schemes.  Taking a few silver or a gold or two from a few peasants isn't worth dying over in his mind.

Where is your villain?  Where is their headquarters?  This will (likely) be based in your campaign world, whether that is Greyhawk, Golorian, or your homebrew world.  Another consideration is another plane.  The Astral Plane is home to the Githyanki (from WotC) and the various Elemental Planes could be home to a villain, depending on their ability to survive.

Fauntleroy is smart enough to make himself rich by relative standards, but he’s the big fish in a small pond.  He lives and works in Smorgas Bjord, a town with 15,000 people, but he also serves as a Judge for the surrounding counties, so his “fees and taxes” haven’t impacted the people so much that the authorities have been called in.

This is dependent entirely on your campaign, but Pathfinder and D&D in general tend to assume you’re running a pseudo-European Middle Ages campaign.

Something that can be done to help establish your villain is to tie them to an event that happened in the past.  Maybe they caused it, maybe they rose up from the event, or maybe their connection to the event is simply coincidence.  If the connection isn’t explained, then the PCs can jump to the conclusion that the villain was responsible and if/when they find out their conclusion is wrong (if it is), then that bring up the question of what else are the PCs wrong about concerning this villain?

Lord D’Evil is 38 years old and rise to prominence during a drought that was occurring around Smorgas Bjord.  He isn’t mentioned by name in any records prior to the drought twelve years ago.  He claimed to be a priest of Abadar and since the populace had no reason to doubt him and they could use a Judge, they accepted him in that role.

The question of When? can also apply to the time frame that your villain is using.  Are they waiting for an auspicious occasion, such as a Spring Festival to launch their attack?  Do they have to wait until a Celestial Conjunction happens? 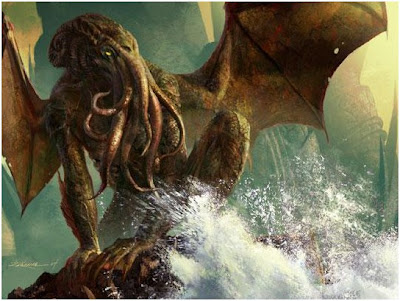 Yeah, I can't see this being a good thing.

If your villain isn't currently in the middle of his dastardly plan, why not?  What is preventing him or her from reaching their goal?  It could be that they're waiting for information or troops that were promised to them by an ally.  Timing could be everything to the villain and disrupting the timing of the plot could give the PCs another chance to stop the plan.

This category ties back into What?  Once you know what the plan is, you have to know the motivation behind the plan.  What is the personal, driving force behind this villain?  It could be something as simple as an underboss protecting his superiors from the PCs out of loyalty (or money) or it could be as grandiose as the main villain attempting to become a god because the villains life has been so bad and "unfair" that the only way to exact revenge on the universe is to become one of its rulers.

Every villain has a motivation.  Something to keep in mind when thinking about motivation is the alignment of your villain.  There aren’t too many Chaotic Evil villains who want to rule the world.  That’s just not their thing.   Those would be Lawful folks.  And don’t forget:  Lawful Good characters can be villains, too!

Yeah, Paladins can be jerks.

See, the stereotype of the uptight, inflexible Paladin is a good example.  If your party is a majority of Chaotic and Neutral characters, then a holy (Lawful Good) organization that has decided that the monarchy is doing everything wrong and that their way is the one “right way,” then that could certainly make the Lawful Good church the “villains,” even though they are positive they are doing the right thing.

Fauntleroy is in the business he is because of greed, plain and simple.  While Fauntleroy works to line his own pockets, as a side effect, he manages to hand down (mostly) fair judgments and makes sure that people who sign into agreements honor those agreements.  He knows that the only way to continue to increase his holdings is to maintain the status quo and work within the system, as Lawful Evil will do.

Okay, you know who your villain is, what they’re doing, and why.  But how do they act?  Are they boisterous or quiet?  Are they brilliant or a few sandwiches short of a picnic?  What are their mannerisms?

Just like I talked about in my entry on Getting Into Character, you should come up with some mannerisms or a speech pattern for your villain.  If you can’t come up with on your own, they go to YouTube and enter “Villain Speech.”  That should give you plenty of ideas.

Also remember that ability scores can be a source of role-playing.  What if Fauntleroy has high Wisdom but low Strength or Constitution?  He would most likely be a spellcaster first and a melee combatant last.  As a spellcaster, he might have loyal or charmed servants to fight for him.  That might give him a sense of invulnerability.  Make sure to play that up.  “You’ll never get me, heroes!”

One more tip I will give you is that unless your players just aren’t buying into how bad you villain is, don’t have them commit atrocities simply to make them “bad.”  A lot of times that kind of thing won’t necessarily sit well with the players.  Not every villain has to be a butcher of babies and kittens.  Obviously, your group’s make-up will determine how far can (and have to) go on the evil your villain commits.

Sometimes when you’re running a villain that the party hasn’t met yet, something will happen and you’ll get an idea of how to change the villain.  That’s fine!  People change all the time.  The best part is that the party doesn’t know about the change because they haven’t met the villain and only know that there is a villain somewhere.

When the party and the villain come face-to-face, make sure to play off of the party.  When they level accusations, unless your villain is a megalomaniac, neither confirm nor deny those accusations.  Ask them if they have proof!  If they do, own up to it be remember that your villain is superior to the PCs!  They can’t possibly beat your villain!  He’s too smart and too powerful!  Make sure, though, that if your villain is supposed to be recurring, then you have to play it that they’re smart enough to know when to escape.

On the off chance that the party manages to kill what is supposed to be a recurring villain, whether through spells or lucky rolls, don’t be angry.  Mourn the villain’s death and gives them a memorable exit.  But always remember: you can create another villain.

There you have some tips on how to make a memorable villain.  Remember to play with archetypes and tweak them until you have the right character.  Push the envelope just a little and you’ll have a villain that your party will love to hate.