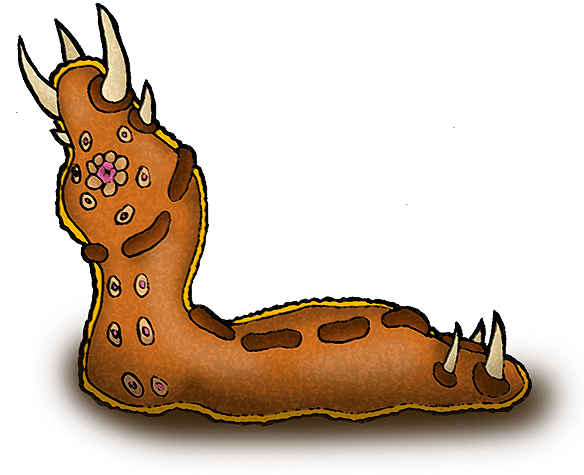 A gelatinous slug umber in hue and covered in amber slime, this creature is patterned with a symmetrical array of hardened nodules. Several dangerous-looking calcified horns protrude outward from both of its tapered ends, making it nearly impossible to tell which end is which. A series of bulbous suckers cover the slug’s underside and surround a wide, fleshy maw that twitches and extrudes more of the viscous slime that envelops the weird gastropod.

Karz Slug       CR 9
XP 5,200
N Medium Vermin
Init +4; Senses blindsight 60 ft.; Perception +10
DEFENSE
AC 20, touch 20, flat-footed 16 (+4 Dex, +16 natural)
hp 35 (5d8+10)
Fort +4, Ref +6, Will +6
DR 10/fire or salt; Immune acid, mind-affecting effects
Weakness susceptible to salt and heat
OFFENSE
Speed 30 ft. (20 ft. on walls or inverted)
Melee lung +4 (2d4+4 plus karz slime on successful hit) (see karz slime)
Ranged spit karz slime +4 (see karz slime)
Space 5 ft.; Reach 5ft./15 ft. (can lunge up to 15 ft. as a melee attack)
STATISTICS
Str 18, Dex 18, Con 12, Int 20, Wis 12, Cha 16
Base Atk +8, CMB +12; CMD 16 (can’t be tripped)
ECOLOGY
Environment underground
Organization brood (6-18) [x3 if located in breeding den]
Treasure none (see karz slug gland)
SPECIAL ABILITIES
Karz Slime (Ex) Karz slugs are covered in a thick layer of translucent amber slime. A karz slug can spit slime as a ranged attack at a target (up to 60 ft.), or slather slime on a target (as a free action) with a successful melee attack. The slime is a fast acting poison and is immediately absorbed into the victim’s skin upon contact. The slime remains poisonous for four rounds after a creature comes into contact with it and each round an affected target must make a Fortitude saving throw to negate its effects. After four rounds the poison is neutralized and the slime is annoying but harmless.
For the initial two rounds of exposure the slime causes Amnesia (Will DC 20), for the last two effective rounds exposure to the slime causes Paranoia (Will DC 17). If a target fails any of these saving throws it remains affected by the relevant slime effects until the poison is cured by magical means such as the neutralize poison spell. If a target is affected by any of these affects for longer than 24 hours then they also become afflicted by Psychosis (no saving throw; insanity DC 20) until the poison is cured by magical means. If a target is affected by any of these effects for longer than a week, the effects become permanent.


Malleable (Ex) A karz slug’s body is very malleable, allowing it to fit into narrow areas with ease. A karz slug takes no penalties to its speed or checks when squeezing in an area that is one size category smaller than its actual size.

Lunge (Ex) A karz slug has the ability to make a lunge attack as a standard melee attack. This lunge attack has a reach of 15 feet. After a lung attack the karz slug moves from its previous square to the square nearest its intended target. This movement is considered a part of its attack and not factored into its movement rate.

Psionic Camouflage (Su) A karz slug has the ability to project itself (illusion) as an environmental element. This is a psionic mind-altering effect (Will DC 25). Karz slugs most commonly use this ability to hide themselves if they flee from an engagement.

Psionic Lure (Su) A karz slug has the ability to project itself (illusion) as any other Medium sized creature it has encountered. This is a psionic mind-altering effect (Will DC 25). As an intelligent creature a karz slug can tell the difference between various creatures, and may choose to work together with other karz slugs to manifest a projected scenario that is more likely to attract prey. While karz slugs do not understand language, their projections can repeat phrases in any language that have been overheard.

Susceptible to Salt (Ex) A handful of salt burns a giant slug as if it where a flask of acid, causing 1d6 points of damage per use.

Susceptible to Heat (Ex) A karz slug takes double damage from heat or fire damage. Its slime is semi-flammable and has a 15% chance of combustion if exposed to an open flame. If a karz slug’s slime ignites, it kills that slug immediately.
If exposed to excessive heat or fire there is a 10% chance that a karz slug instinctively flees for 2d4 rounds.


TACTICS
Karz slugs are rarely found alone. If they are separated from their kin they often become withdrawn and docile–fleeing at the first opportune moment. However, in groups they become quite vicious and committed to killing and consuming other creatures in mass.
Karz slugs communicate with one another via a telepathic link that radiates 250 ft. from their square. They work together to kill off their prey, usually attacking any targets with fire first, followed by targets they perceive to be weakest.
If encountered within a karz slug breeding den, all karz slugs gain the benefits of a constant extraordinary effect identical to the haste spell.

Karz Slug Glands
A karz slug has a gland located near its core. This gland enables its natural psionic abilities. If removed from the dead slug, dried, and properly prepared (DC 15 Craft [magic items] check; 48-hours), it becomes a enchanted consumable. Once properly prepared and eaten, it provides the user with immunity to all mind-altering affects and a +3 bonus to Will saving throws for 24-hours. This includes any mind-altering status effects that the user may have been affected by before consumption. The taste of a prepared karz slug gland is eye-wateringly sour and bitter.