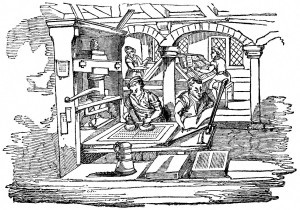 While Steamtown is being packed up, ready to move down the rails for its new site, Borys approaches the PCs for a final mission. After the recent hellion attack, several items have been possessed. One of these items, however, poses a major problem and has just come to light.

A printing press, worshipped by the goblins as a god, has been discovered hidden in an abandoned shed-turned-temple about 2 miles to the north of Steamtown. To further complicate matters, the goblin workers believe the press to be truly divine—and that it can foretell the future. In fact, the press has turned out to be the source of the prognosticating articles that have been circulated in the Steamtown Herald for the past few months.

The press has stopped working, and the goblins now think that their god press is dead, killed by the demons unleashed from the blast site—they aren't going to go to work again anytime soon. In order to get them back to it, the laborers need to be convinced that their god still lives, or that the press was never a god entity. Borys offers a 10,000 gp reward to the PCs to handle this as they see fit; any outcome that gets the goblins working again is acceptable.

The shed is well-hidden at the end of a small box canyon and it takes about one and a half hours on foot to reach the shed due to the rough terrain. When the party arrives they are met with a curious sight—a dozen goblins are prostrating themselves before the tin-roofed wooden shed. The structure has a single, wood-slatted door that is half open, and the entire shabby building has been decorated with what appear to be allogotonium items, painted runes, and the occasional newspaper. The goblins are wailing—a DC 18 Spellcraft or Knowledge (religion) check reveals why: they are communally casting a spell to prevent possession in the area. This negates the inanimate possession power of the hellion revenants within 100 ft. of the chanting goblins, although it does not expel a revenant from a currently possessed item. 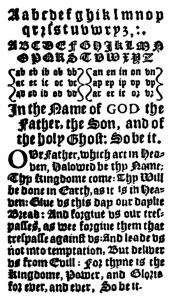 The goblins, occupied with their ritual, do not hinder the party's progress into the shed. It has a simple metal table that holds a printing press and makeshift wooden altars surround it—some have lit candles while others have small baubles and tributes, and a few even have some unrecognizable food items. Shortly after the party enters the shed, a single news sheet prints out. In bold letters, it says, "Help me! Destroy the sheets as they leave and let me retake control."
A few rounds later sheets begin to print (four per round for five rounds). The sheets can be easily destroyed—anything that would destroy a normal sheet of paper destroys one of these. Each time a sheet is destroyed, 1d4+1 hellion revenants appear. At the end of 5 rounds,  it prints out one more sheet: a DC 20 Perception check reveals that this missive is different than the others. It simply says, "I'm free; prepare yourselves!"

One round after the last sheet emerges, the press starts shaking and smoking. A stream of ink shoots out of one end and begins to sculpt a 3-dimensional object that materializes as the Archivist. [In tomorrow's stat block Sunday! -RT] The Archivist immediately attacks the nearest arcane spellcaster in the hopes that he can steal a spell to escape.

Once the Archivist is defeated or escapes (XP is awarded either way) the goblins stop their chanting and enter the shed to attend to the press. They thank the PCs for returning their god to them, and promise that they will go back to work. The press prints out a final page: "I will return and tend to my flock. The dangers that lie ahead can be managed by them, but if you see your name in print again, know that I am calling, and that I need you." The press continues to steer the goblins in a manner that avoids waking demons. 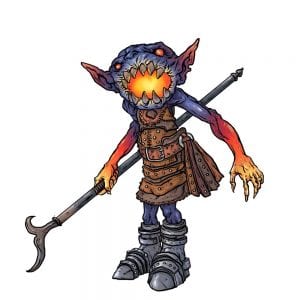 If the PCs try to destroy the press, the 12 goblins defend it with their lives. The leader of the goblins begins the action by breaking a small metal item that unleashes 1d10 hellion revenants that  attempt to possess items that the adventurers carry, as the protective aura provided by the goblins is no longer in effect.
No matter what happens, the goblins return to work and the party receives their reward.