DESCRIPTION
This single right-handed gauntlet of segmented golden plates has been polished to a mirror-like gleam, and its bracer has been inset with three large gemstone cabochons—one of ruby, another of sapphire, and the last of emerald. 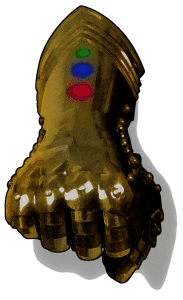 Ruby Cabochon – As a full round action, the user may make a ranged touch attack that functions as teleport (CL 20th) upon a target creature or object (Will DC 25 negates). The result of the teleport is chosen by the user and is always “on target,” however the range is limited to a 100-ft.-radius centered on the target. A target cannot be teleported to a space already occupied nor can its relative elevation altered more than 10 ft. up or down. This ability may only be used once every 1d6 rounds. In appearance this effect opens a whirling vortex of carmine light that attempts to suck the target in. When successful the vortex vanishes and immediately reappears in the defined location to force the affected target into the unoccupied space.

Sapphire Cabochon – As a full round action, the user may make a ranged touch attack that functions as telekinesis (CL 15th) to exert a single (Will DC 20 negates) violent thrust upon a target creature or object (up to 375 pounds) hurling it up to 20-feet in any direction. If the target is hurled against a solid surface it takes damage as if it had fallen 10 feet (1d6 points). This ability may only be used once every for 1d4 rounds. This effect appears as a whirling vortex of cerulean light that forms around the target and attempts to fling them in the desired direction before vanishing.

Emerald Cabochon – This effect activates a constant dimensional anchor (CL 15th) in a 100-ft.-radius centered on the user. This affects all creatures (regardless of immunities) within the field of effect, including the user.

DESTRUCTION
The gauntlet of deracination must be immersed in fields of energy on each of the four essential elemental planes (air: electricity, earth: acid, flame: fire, water: cold) before a creature strikes it with a natural attack roll of 20.