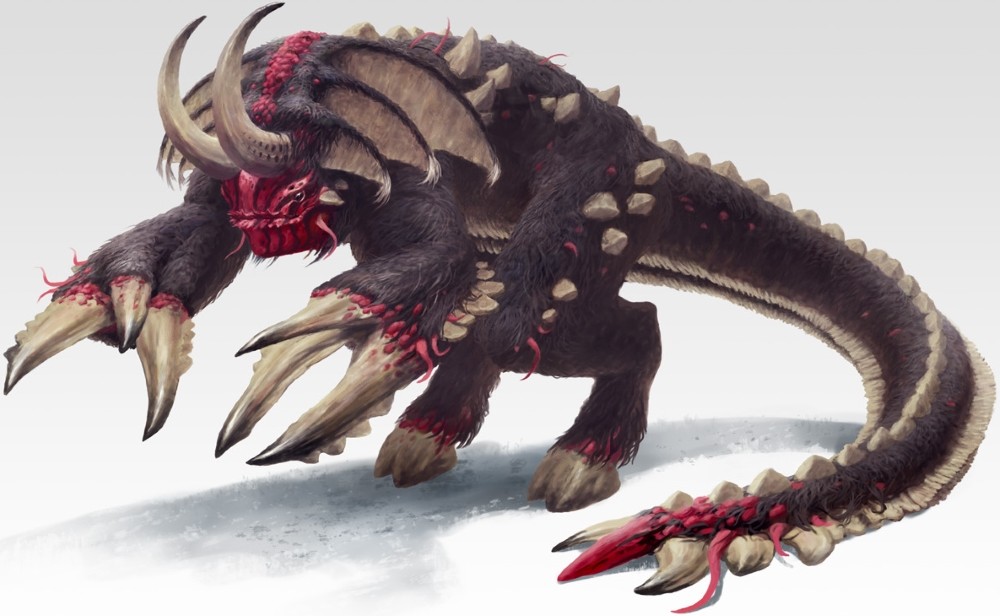 This terrifying creature is a towering monstrosity that looms nearly twenty feet into the air. Six ears sprout from behind the curved horns at the top of its striped red face, the bone the same color as its hooves, the three claws extending from its arms, and the spined ridges running down its back to the end of its powerful tail.

TACTICS
Before Combat The galate hides in the shadows or out of sight, using deep slumber and then nightmare on anyone that falls asleep.
During Combat Using its tremendous speed and strength a galate runs out to grab any spellcasters with its claw attack, dragging them away with shadow walk the next round and then deep slumber and its night terrors attack. It teleports back and knocks any remaining enemies unconscious, using night terrors and dream slave afterward.
Morale Galate fight to the (feigned) death and until they are completely destroyed.

SPECIAL ABILITIES
Critical Claws (Ex) A galate’s claws have a regular critical threat range of 19-20 and a critical modifier of x3, and galate receive Improved Critical (claws) as a bonus feat.
Dream Slave (Su) Instead of killing a target with its night terror ability, a galate may instead enslave it with a permanent dominate monster effect. The enslaved creature is healed of all Charisma damage taken from night terrors.
Feign Death (Ex) Whenever a galate is unconscious, it appears dead. A conscious galate can also make itself appear dead as an immediate action. Any creature that physically interacts with a galate feigning death must succeed at a DC 21 Heal check or DC 21 Will saving throw to recognize it is actually alive.
Frightful Presence (Su) This ability activates when the galate charges, attacks during a surprise round, or succeeds at a DC 15 Intimidate or Perform check. Its frightful presence has a range of 30 feet.
Night Terrors (Su) Once a galate enters a target's mind with its dream or nightmare spell-like ability, it can attempt to control the target's dream. If the target fails a Will saving throw, it remains asleep and trapped in the dream world with the galate. Thereafter, the galate controls all aspects of the dream. Each hour that passes, the target can attempt another saving throw to try to awaken (it automatically awakens after 8 hours or if the galate releases it). The target takes 1d4 points of Charisma damage each hour it is trapped in the dream; if it takes any Charisma damage, it is fatigued and unable to regain arcane spells for the next 24 hours. The target dies if this Charisma damage equals or exceeds its actual Charisma score.

Dream Slave. When a galate kills a creature under the effects of its dream spell, it can instead choose to revive that creature. The creature is under the galate’s control, as if it had cast dominate monster.
Feign Death. A DC 22 Wisdom (Heal) check is required to tell that an unconscious galate is not dead. A galate can feign death as a bonus action.
Innate Spellcasting. The galate’s spellcasting ability is Charisma (spell save DC 17). The galate can innately cast the following spells, requiring no material components:
At will: dream, see invisibility
3/day each: eyebite (asleep only), invisibility, fly, sleep, teleport
1/day each: phantasmal killer, suggestion
Night Terrors. A galate can automatically succeed on one attack a round made against a creature affected by its dream spell. The galate can make this attack from any distance and through any barrier, so long as it is on the same plane as the target affected by its dream spell.