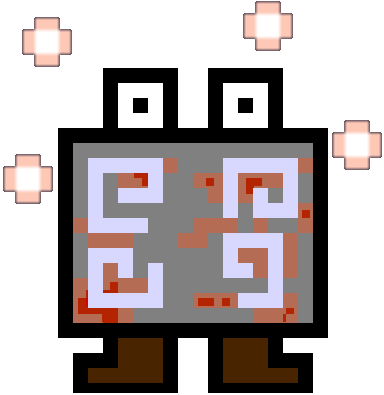 [This creature plays a persistent role in this week’s miniworld of Ludolog—make sure to check out the rules for the 2-Bit Dimension! -TS]

TACTICS
During Combat A gaff starts by using plasma burst, then activates reverse flow and springboard as it moves toward the closest enemy.
Morale A gaff fights to the death.

SPECIAL ABILITIES
Propulsion (Ex) Creatures that take damage from a gaff are pushed 10 feet (DC 24 Fortitude negates). If a creature cannot be pushed backward due to another creature or object in the way, they are staggered for 1 round instead. Creature affected by this are immune to all instadeath effects for 1 round.
Reverse Flow (Ex) As a standard action the gaff creates four glowing spheres that orbit it and redirect magic attacks targeting the gaff for one minute (this includes magical effects which have an area the gaff is within). The gaff takes 50% of the damage dealt and redirects the rest of the damage in a 60-foot line towards the closest enemy (ranged touch +18). Each time the gaff benefits from this effect, one sphere disappears; when none remain, reverse flow deactivates.
Springboard (Ex) As a swift action the gaff braces for impact for 1 round; when a creature deals melee damage to the gaff, 50% of the damage is reflected back at the attacker as the gaff’s springs rebound (ranged touch +18).