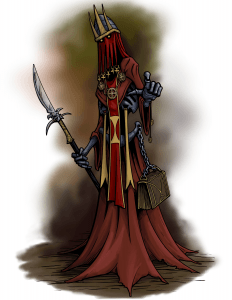 The best lead to repair the PCs’ airship is to follow Sulcera Stonesmile, a strange thief found rooting through the vessel when the party returned to it. She assures the adventurers that her ally Doc Fell can help find the lost engine parts or possibly even help get them back. Ever the wildcard, the curious pale stranger secures the party’s aid but ultimately, he betrays them (either in a duel-turned-ambush or later on) and offers the PCs to another warlord instead: the ruler of Valindar, the dreaded lich Syfforack Zoi.

A coterie of prepared zombie mages knock the party unconscious and drag them to the City of Eternal Death. They are imprisoned and enslaved in the undead settlement, acting as the lich’s servants while his armies prepare for war and forced to weather the dangers that constantly assail mortals in Valindar. A chance to escape comes before the final battle on the eve of the Festival of Night begins, though intrepid PCs will take the fight to Syfforack Zoi before he can mobilize his soldiers (and possibly find a powerful aid, a ferryman’s toll, if they pick the right pocket in the marketplace).

His throne room is roamed by the whispers of Qexaathus haunt and though the adventurers may be raring to combat the lich head on, the false phylactery trap in the trunk their equipment is kept in may force them to think twice about it. Defeating him takes one of the four warlords out of the imminent battle between the armies of the Forsaken Frontier, and if they search the dais of his seat of power closely enough, the party finds a truly potent artifact sure to aid them in the Festival of Night. Syfforack Zoi went to great lengths to acquire the gauntlet of deracination specifically to counter the abilities of the last undead to rule the Salamangka, the vortex dragon Savithrin. 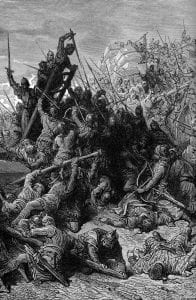 The battle that heralds the great event begins on schedule [tomorrow’s Sidequest Saturday! -MM] and PCs who escape quickly can make alliances or assassination attempts on the other warlords as they see fit. All four will stop at nothing to call the Shining City their own, regardless of the dangers presented by the River of Contempt or the arcane vortices of the Plains of Destryka. By cutting the right deals and striking at the commanders of the legions of undead that march on Salamangka, the adventurers have the chance to bring light or darkness to the Forsaken Frontier—and perhaps all of the Disputed Territories.