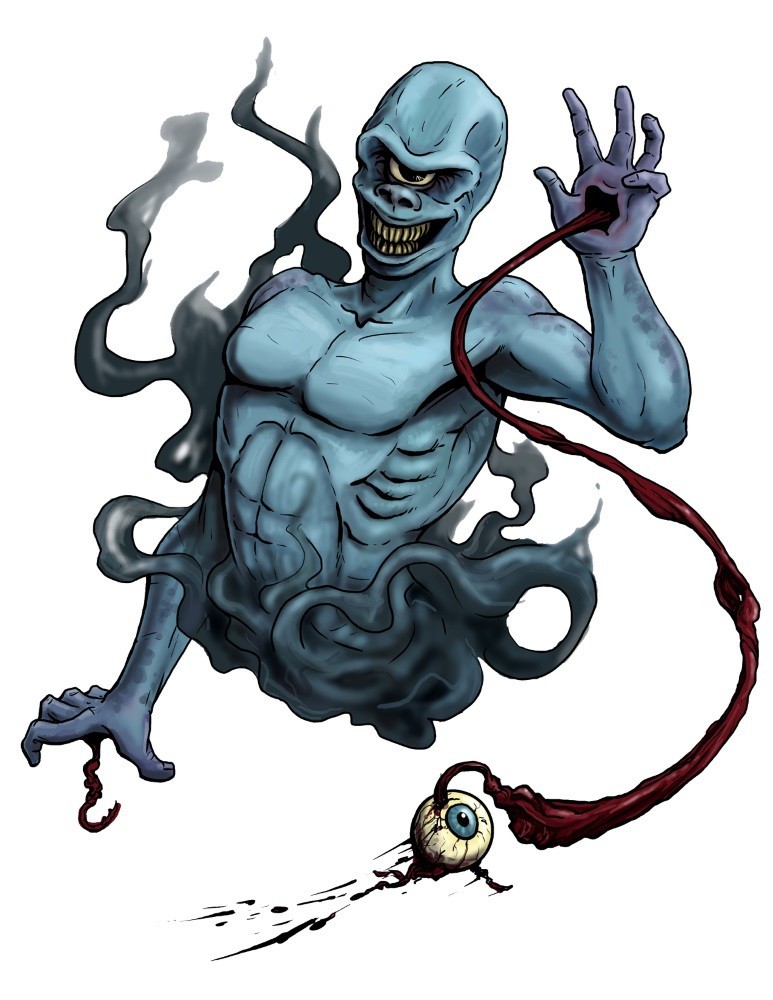 This blue-skinned creature swiftly floats out from a bank of mists on a carpet of blue and black smoke. It grins maniacally, the one eye dominating its face pursed in anger.

TACTICS
Before Combat The eye eater uses its spell-like abilities to confuse prey and get within reach to eye gouge.
During Combat Eye eaters do not fight to kill, they fight to maim—once a target has been deprived of an eye (or eyes; see experience palette below) the monster moves onto another. The only exception to this is when an enemy strikes an eye eater’s eye, at which point it aims to completely blinds their foe.
Morale When all creatures within its perception have been maimed, removed of an eye (or eyes), the eye eater flees.

SPECIAL ABILITIES
Impossible Flight (Ex) It is completely impossible to see what exactly keeps an eye eater aloft, and even the cunning creatures are unsure of how they achieve flight so swift and perfect.
Experienced Palette (Ex) Eye eaters are quite strange and unless their prey wounds its eye or possesses more hit dice than the eye eater, it only takes one eye per creature it encounters. Should an eye eater’s single eye get wounded (AC 27, flat-footed 18; hp 8) it is immediately healed as soon as it completes a successful eye gouge.
Eye Gouges (Ex) Within the arms of eye eaters are long tendrils ending with hooked, serrated barbs. When uncoiled (a free action) the eye eater can replace any slam attack with an eye gouge. Eye gouges have a range of 15 feet and are melee touch attacks made at a -8 penalty; on a successful hit, a tendril impales the target’s eye. At the beginning of the eye eater’s next turn any uncoiled tendrils reel back into its arms (along with any eyes impaled by them). Tendrils have an AC of 12 and 10 hit points.
Creatures with one eye suffer a -4 penalty to visual-based Perception checks. A damaged eye is restored after the barb is removed (a DC 23 Heal check) and the creature receives a cure spell or other form of magical healing.

Eye eaters are some of Aventyr’s most mysterious and malicious denizens, often found wandering the Underworld but said to frequent even the most inhospitable regions as well. Enigmatic and unfriendly to virtually all races, these monsters quick descend on camps of adventurers (typically as they rest) and assault with dashes peppered by maiming strikes before disappearing when their quarry is blooded (and short of an eye each).