Enixam is where the detritus and disenfranchised of Klavek Kingdom’s capital often find themselves shuffled off to. Lepers, pariahs, and outcasts find new lives here, supporting one another and providing ample labor for the busy piers across the Mohkba River. Criminals make efficient use of Enixam and provide the hidden backbone of its economy, disguising themselves and blending in with its populace in order to dodge out of the way of Mohkba officials and guards. 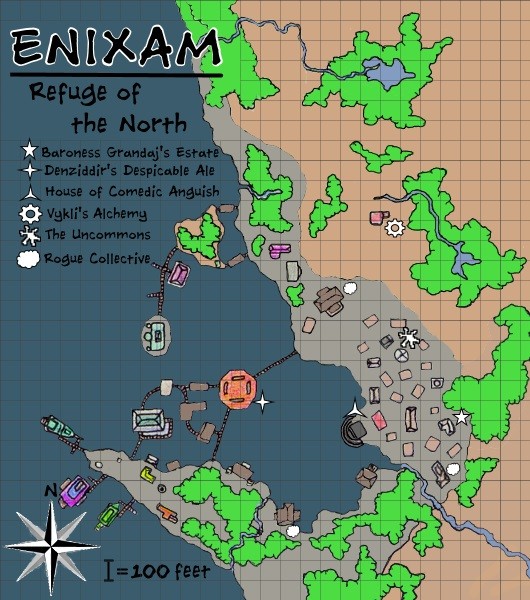 Baroness Grandaj’s Estate
The leader of Mohkba’s sister settlement across the river lives to the northeast; all civil concerns in Enixam go directly to her, though important announcements and town meetings are held in the House of Comedic Anguish.

Denziddir’s Despicable Ale
While there are several merchants that stock ale and wine in Enixam, there’s only one legitimate watering hole. Located on the water and accessible only by boat or wooden bridge, Denziddir’s Despicable Ale is cunningly named to detract young nobles from across the Mohkba River. Its proprietor Denziddir (N Male ogre rogue 3) claims to be a half-orc with some giant in his blood and the truth of his lineage is a well kept secret among the settlement’s longest-lived citizens, one protected by the criminal element—the drinking establishment is a locus of illegal activity that prizes the physically gifted barkeep. 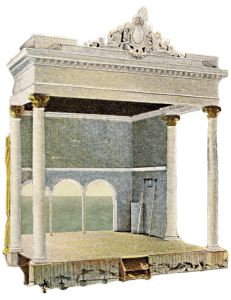 House of Comedic Anguish
The sole survivors of a terrible theater fire, Mohkba’s finest acting duo were severely burned, marred beyond the reach of healing magic. Rather than retreat from the public eye, the two moved across the river to Enixam and with Baroness Grandaj’s patronage, built the settlement’s sole house of the arts. The truly cultured nobility of the capital often travel to these shows, hiring on bodyguards to accompany them the entirety of their time in the Refuge of the North.

Vykli’s Alchemy
Only slightly less well known than the town’s leader, Vykli (LN Female hobgoblin alchemist [grenadier] 8) is arguably the finest alchemist in the proximity of the Klavek Kingdom. At the (extremely profitable) behest of Baroness Grandaj, the scientist disguised herself and traveled to Enixam, working to “cure” the noble of her “deformities”. Unfortunately Vykli has had little success at that task, but a strong customer base of Mohkba’s elite have kept her here. Keen to finally complete the miraculous feat requested of her, the alchemist sometimes employs adventurers to acquire increasingly rarer reagents for her unorthodox concoctions.

The Uncommons and Rogue Collectives
The majority of Enixam’s citizens live in the Uncommons, clustered on the inner-bay’s paved streets. Those that don’t live in their own homes share rooms in one of the various collectives, though these are little more than fronts for the town’s criminals. The three gangs squabble over territory for pickpocketing, racketeering, and the best ships to take west across the river and into the more profitable alleyways of Mohkba.