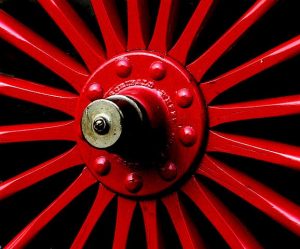 Borys has a final task for the PCs—after the pass was blasted and the alligotonium cloud descended upon Steamtown, PNE has more enchanted ore than they know what to do with, and it may be possessed by revenants (or worse). Too valuable to leave here in its raw state and too dangerous to try to fashion useful items out of, since it's rightly the property of PNE, they've decided to send it to a smelter in the city of Nyamo in far off Timeaus, a facility in good standing with the Samsara Mining Conglomerate. They have both the facilities and magical knowledge to deal with this ore safely.

Borys points at four full wagons of the ore. "These need to get to Nyamo, and I need you to guard them along the way. Some agents from SMC have just arrived and they'll travel with you as well. Once these safely reach Nyamo, you are to be given 100 pounds of the ore as a reward; once it is determined to be safe, of course."

The party makes a series of Diplomacy checks during the course of the trip to try to befriend the agents, who start out with an Indifferent attitude toward the adventurers (the difficulty of each check is the base DC of the attitude +7.) On a failure of 5 or more, an agent's attitude drops by one step, and on a success, it increases by one step. These checks can be done once per day. After one week the agents spring a trap, but if the attitude of the agents towards the PCs is Helpful, they hand one member of the party a hand written note before springing the trap. [The note's contents to be revealed in an upcoming post! - RT ]