Which Adventureaweek.com adventures would work well as a prelude to Rito della Successione?
Since this adventure starts out at level 13, there are a lot of modules you could run! A18: Storm's Wake is probably best as the prelude, given that it is at the appropriate level and water-based.

What was your source of inspiration for this adventure?
I was part of the Open Design project "Dark Deeds in Freeport". After pouring through lots of Freeport source material, I found it both odd and intriguing that the opera house and Donadrien were mentioned by name and had their own little section, but as far as I could tell, nothing was ever done with them. I wanted to do something with them. After all, how many adventures prominently feature an opera house? Also, my own home campaign (set in Freeport) was going to run out of source material.

How did the adventure change from your original concept?
I can't answer that completely without providing a spoiler. Let's just say that there was going to be more carnage and far-reaching effects, but I didn't want to disrupt the setting.

What is your typical process for fleshing out an adventure like this? Did you do anything different for Rito della Successione?
When I write an adventure, I start with a hook. In this case it was the opera house. I then make my maps and write somewhat detailed descriptions of each of the locations. Once I have a firm grasp of the setting, I find it far easier to write the adventure. In this case, though, I had to develop the story first, and make the settings match the plot progression. Other than the opera house, I really didn't know what other locations I would need before I wrote the adventure. 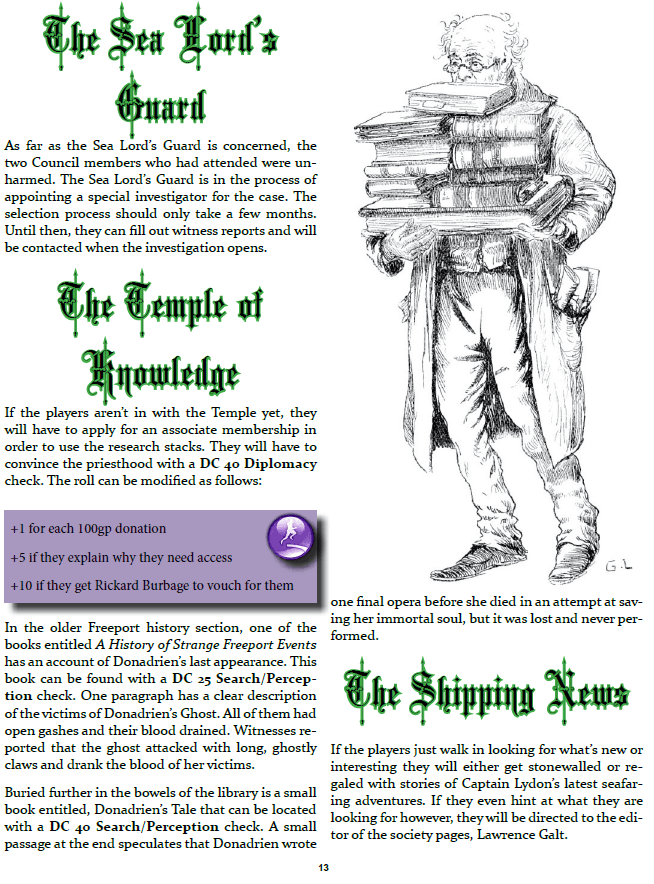 What tools did you use while writing this adventure?
I used Pathfinder rulebooks and almost all available Freeport material. Maps were hand drawn in scientific notebooks, because those have graph paper inside and I can take notes. I also used Hero Lab and PCGen to generate stat blocks for monsters and NPC's and sample PCs. I always make some sample PCs at level so I can refer to their skill bonuses. This helps to set up the encounters and DCs.

Tell us about one character, creature, item, or spell which was unique to to Rito della Successione. How did you come up with the idea and what went into the design of this part of the adventure?
Grantland Lovejoy is a very minor character, but I think he is the one that the GM and players can have the most fun with. He is a celebrity reporter and interviews the characters near the beginning of the scenario. Their answers to his questions end up in the next day's newspaper. The short-term reputation effects can be played up and could impact the adventure in a fun, new way. Fantasy paparazzi, anyone?

Which Adventureaweek.com adventures would work well after the players conclude Rito della Successione?
I would run A19: Incandium's Eruption, as it is recommended to run after A12: When the Ship Goes Down anyway. This adventure can provide some needed XP and resources to bridge the gap from level 12 to level 14.