Sage Yuri Statel is a short man with long white hair. His scar-covered arms hint at a youth spent practicing close combat. His face has the appearance of worn leather and although he looks old his eyes have a youthful glint in them. He walks with a small staff engraved with interesting patterns and painted purple and gold. 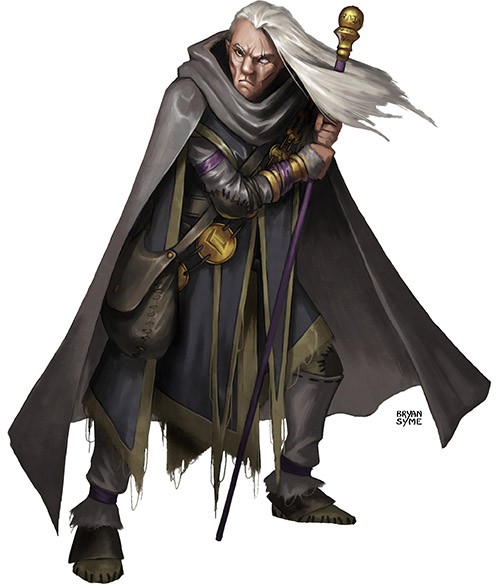 Yuri Statel is the local Sage in Rybalka and owns Mastera Library, a library of over 2,500 tomes that he runs out of his home.

Yuri Statel is a sage and wizard and thus an expert in all things magical and alchemical. He also buys and sells minor magical items and weapons for a hefty transaction fee (40-60%).

Yuri knows the location of many strange alchemy ingredients. He frequently hires adventurers to trek into the nearby forests and retrieve hard to come by plants and herbs. He owns very expensive alchemy equipment imported from Mohkba (Capital of the Klavek Kingdom) which he keeps private but will share with fellow mages who show interest in the art and science of alchemy. (He also keeps tabs on any such person and notifies the Klavek Kingdom as to the arrival of another wizard in Rybalka.)

If there is someone who can answer almost any question in town, it is Sage Yuri Statel whom the locals simply call “Yuri”.

GM NOTE: If the PCs share their interest in the art he will open up considerably and probably become a reliable source of information to them in the future.

Yuri Statel is an agent for King Tokolvor Klavek XIII and has been assigned to Rybalka to keep tabs on the villagers and the Klavek troops stationed here. Any signs of Rybalka rebellion or peace talks with the Vikmordere are reported instantly by Yuri to the Klavek Kingdom. Yuri Statel is just one of many aliases the wizard uses. Even the sage’s closest associates do not know his true name.

History: Yuri Statel began his career at a young age as a Cavalier serving the Lion Brigade of King Tokolvor XII. While serving his country in the Great War Yuri was captured by the enemy. They tortured him for over a year before he was rescued by his countrymen. No one knows exactly what happened in that enemy dungeon, but Yuri was changed forever.

After this event, he returned to the Klavek Capitol of Mohkba. Seeking an audience with King Tokolvor Klavek XII’s son the Prince, he petitioned to become a personal historian of the Klavek Kingdom. During his time serving Prince Klavek, his father King Klavek was mysteriously poisoned. The murderer was never found and Prince Tokolvor Klavek became the current king, King Tokolvor Klavek XIII. (This knowledge is known only to historians serving the monarchy or those Klavekian soldiers old enough to remember such events. Yuri’s role is not suspect as he went by a different alias at the time.)