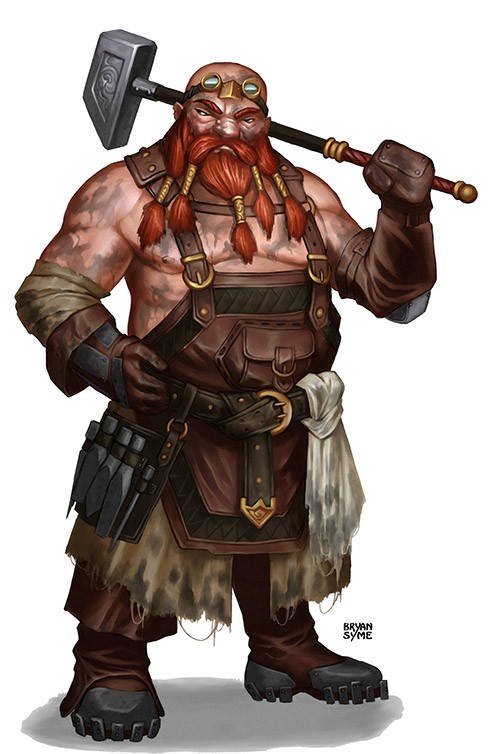 Quorron is the blacksmith in Rybalka and has been so for over thirty years, long before the Klavekians took possession of the lakeside village. Mayor Igor Leonid keeps a close eye on Quorron, but so far the dweorg has proven trustworthy and uninterested in local politics. The dwarven blacksmith provides general smithy services including weapons & armor construction and repair. Quorron the Rybalkan Blacksmith is truly an artist when it comes to weapon and armor crafting though he would never admit it. He is a rough and tumble dwarf who hails from the city of Embla (Rise of the Drow).

After learning his trade in Embla, Quorron spent many years in the deep ice caves under the Vikmordere Mountains, meditating and waiting for a vision, he finally heard the dwarven god calling out for him to serve in Rybalka, the village of the Upperworlders adjacent to the Lake of the Great Serpent. Quorron never speaks of his homeland to anyone and there are two reasons for this: firstly, as a dweorg dwarf, it is forbidden to reveal one’s homeland to an outsider unless the dwarven homeland is under attack and needs assistance. Secondly, Quorron is an outcast and was banished from his homeland after killing his uncle in a dispute over rights to the family forge.

Quorron has never cared for politics or gossip and believes that "might makes right." This is why he holds no qualms over the new claim-holders on Rybalka. The Klavekians defeated the Vikmordere (Quorron’s former employers) with brute force. Therefore, with Quorron’s “might makes right” philosophy, the Klavekians have every right to own this land.

When dealing with customers Quorron is short and to the point, ignoring small talk entirely and working tirelessly to appease his clients.

Quorron sometimes hires trustworthy adventurers and mercenaries to perform various quests which typically have something to do with ore, metal, crafting techniques, or his customers' orders. He is short and to the point when offering up a quest and doesn't like a lot of questions.

Quorron's Quests are ideas submitted by YOU!
If you'd like to submit a quest please share your ideas in the comments below. If we like your submission, we'll contact you to flesh things out further.