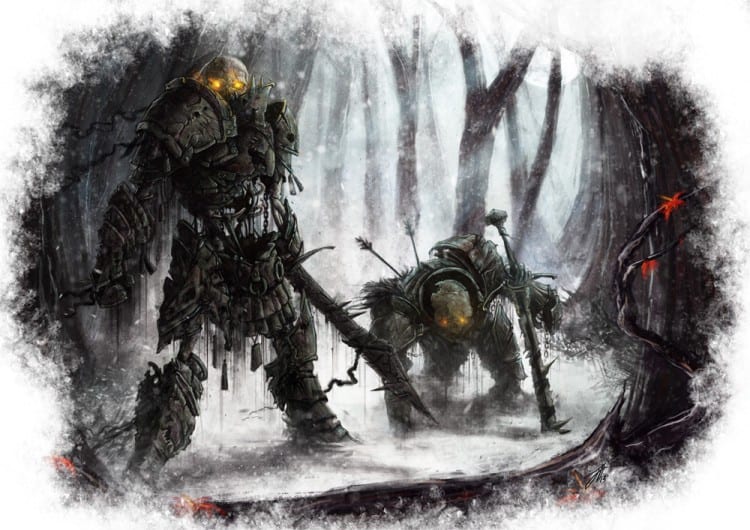 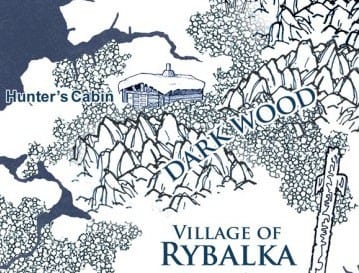 Feared by even the most powerful Vikmordere warriors, the Dark Wood is a shadowy and foreboding place. Vikmordere legend speaks of a horrible deed done by evil druidic sorcerers long ago which created a rift to another world through which devils spawned. The Sun Lord Ka'Teek along with his followers battled many of the beasts and were able to seal the rift. Unfortunately the damage was already done; The devils & demons had spread into the forest now known as Dark Wood. Over hundreds of years the devils from the rift bred with the creatures of the forest creating all manner of foul monsters.

Travel through Dark Wood is extremely dangerous during the day and considered suicide if undertaken at night. Regional hunters must learn the art of the warrior or die in this unforgiving land. The strong survive while the weak become fodder for the beasts of Dark Wood.

The story of how Dark Wood became the evil place it is today is known only by a few isolated mountain druids who continue to pass the story down to their brethren.

A cult of half-elf druidic sorcerers worshiped the underlying forces of nature in a beautiful rich and diverse forest full of all manner of woodland creatures. The druids spent their entire lives in pursuit of the primal knowledge of nature's energy and the life force that governs all things on the planet. At some point during this pursuit most druids experience "the draw", an evil force which attempts to pull the druid away from their pursuit of the natural and into the realm of supernatural where great power and knowledge is promised with great ease. This "draw" is issued forth from the other world, the realm of devils where evil entities tempt and bribe the realm of men in trade for evil favors.

The leader of the cult of druids fell for just such a ploy. He was a man of great power and knowledge who lost everything in a gamble that he would regret for the rest of his very short life. The exact details have been lost to the sands of time. What is known is that the leader of the druids (while under the control of a great devil) gathered the group of druids at a stone circle for a grand spell. This spell would link the physical world with the spirit. It would bring the entire forest into a permanent communion with the life force of the planet (or so the devil whispered the lies into his ears). 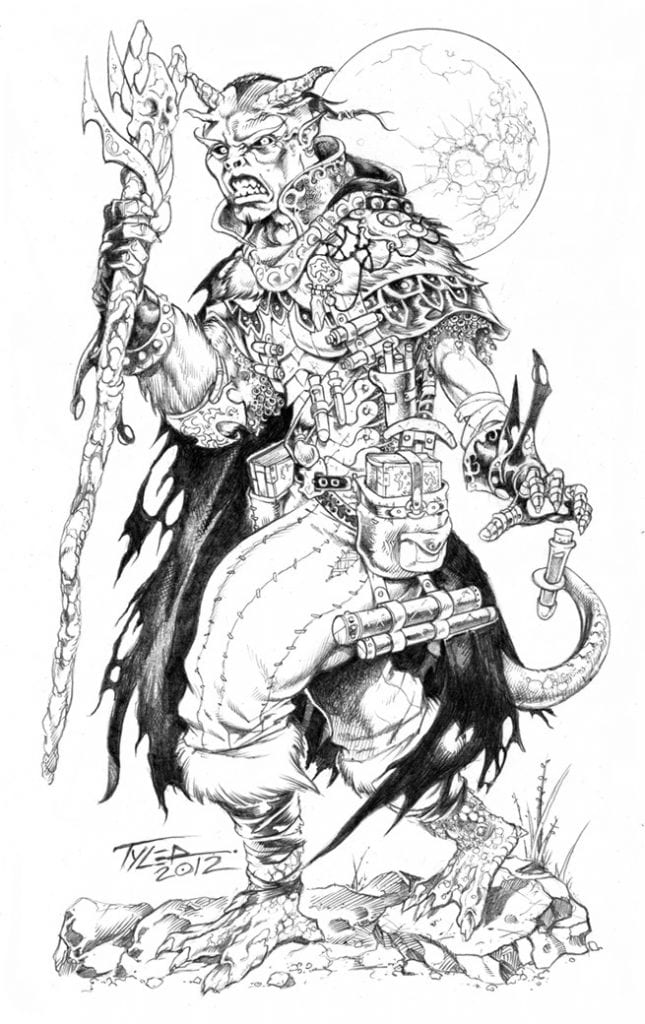 After many hours of chanting the spell was finally complete. It tore the very physical world asunder, creating a great rift in the middle of the forest. Through this rift poured copious amounts of evil monsters and their devil slave masters. It seemed as though the devil world was replete with reinforcements. Within just a few short hours the devils swarmed through most of the forest killing animals, fairies, and centaurs as they went. They didn't stop there; After the forest was seized the very devil whom tricked the leader of the druids gathered all of the druid (save one* who escaped the onslaught) to have them slain in a dark ritual sacrifice to the great lord of the devils. The druids were lined up at the same stone circle where the spell was cast. Each one was bound to a stone where they were decapitated one by one. Each of the heads was buried in a secret location in the forest. The great devil cursed the druidic to spend their undead lives searching the forest for their heads. The druids refused to acknowledge the curse, instead choosing to pursue the devils and the monsters of the forest. Each night the evil druidic sorcerers rise as headless corpses, doomed to forever wander the Dark Wood searching for monsters and devils to slay, on a constant never ending hunt for their tormentors. Each night the evil druidic sorcerers are slain. Upon the next sunset they rise to once again continue to the hunt, trapped in a cycle of torment and despair.

The devils did not stop with the forest and continued by attacking the lakeside tribal village now known as Rybalka. The Vikmordere were not prepared for the attack and almost lost the entire village to the onslaught. Finally, Sun Lord Ka'Teek arrived by ship with 50 of his best men. The Sun Lord and his men attacked with great vigor and drove the devils and monsters back to their forest where Lord Ka'Teek worked great magic to close the rift and seal off this world from the realm of devils. It was at this time that the Sun Lord Ka'Teek was attacked by the great devil who had tricked the druid leader. After a dangerous and bloody battle, Sun Lord Ka'Teek triumphed but received a wound that ultimately over the course of many years would take his life.

*The druid which escaped fled to the mountains where she gave birth to a son and raised him in the traditional druidic ways. The story of the druids & devils of Dark Wood and Sun Lord Ka'Teek's triumphant accomplishments have been passed down in this family for generations. The family also retains the knowledge of a hidden artifact which may eventually lead to the cleansing of Dark Wood, but they must wait until the time is right. If the knowledge is brought to civilization at the wrong time it could risk placing the artifact in the hands of the devils. This would signal the end of civilization in the Vikmordere Valley.