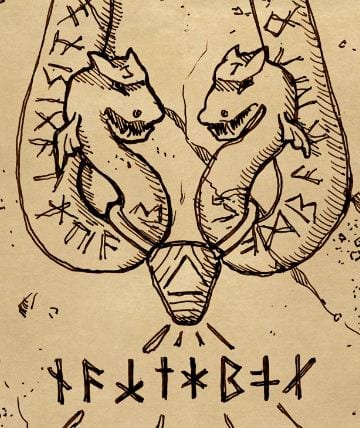 Lore: Legends speak of the kings of old using this artifact to harness the energy of the great serpents of Serpent Lake.

Fact: The Tri-Stone is a very powerful artifact. The secrets of the Tri-Stone are held by only a few over-aged tribal elders of the Vikmordere. These secret rituals which are required to activate the stone are passed down only to the wisest and most trustworthy members of the Vikmordere. Use of the Tri-Stone without the rituals is as close to impossible as any task can be, unless the gods deem its use imperative to saving the Vikmordere people. If used without the proper rituals, the user will achieve their aims but will die without any recourse, finding themselves facing the gods for judgment as to whether they should be returned alive to the Prime Plane as a hero to all.
The artifact is capable of binding two Lake Serpents and draining their life force thus granting it to an individual. The Shaman undertaking this task needs to convince the Serpents of the need to do this voluntarily, a task which will involve converting the Serpents and then winning a triple-stranded argument without any counter-viewpoint winning through. This individual becomes so powerful that they are permanently imbued with innate magical abilities.

The Tri-Stone is a dominating artifact capable of binding two massive Water Serpents to servitude and transferring their life force to the individual wielding the stone. Using the powers of the stone without detailed knowledge of the rituals involved could easily bring about the death of the wielder. The Tri-Stone itself, as an artifact, is aware of the worthiness of the person attempting the ritual with one exception. If someone tries to use it via Use Magic Device, the Tri-Stone often becomes "confused" and more susceptible to the ritual working. This is because its first use was actually by a Goddess of Rogues, who sole it from its maker at the moment of its completion and was able to activate it before it was recovered. This is also why Lake Serpents are particularly wary of Rogues of any level and will often target them before any other adversary.

The binding ritual has a number of stages, each of which is designed to be perilous, threatening and rewarding in equal measure. The first part is the hunt for the Lake Serpents. he combined age categories must be at least the level of the person attempting the ritual, plus two; a 10th level PC attempting the ritual must have a combined age category of 12 for the two serpents, for example.
The wielder of the Tri-Stone must face the Serpent and overcome its Frightful Presence with no aid other than the Tri-Stone, which grants a +5 bonus to the role. The wielder must then intimidate the Serpent with an opposed roll; again, the Tri-Stone provides a +5 bonus to the role. If the wielder fails either of these, the Serpent will attack without mercy and attempt to take the Tri-Stone.

The next stage is to engage the Serpent in a diplomatic discussion about the need for the ritual to be fulfilled. This can be achieved by three consecutive Diplomacy rolls which are won by the wielder. The Tri-Stone does not provide any bonus to these rolls, although the wielder can use magic to enhance their Diplomacy ability prior to engaging in the discussion. Each discussion takes 30 minutes, at the end of which the roll is made. These three attempts can only be made once per day and if the wielder fails for three days in a row, the Serpent will attack without mercy and attempt to take the Tri-Stone from the wielder.

When the wielder has convinced the Serpent of the need to give its life force, she or he must then gift the Serpent their most valuable items, totalling the wielders level times 15,000 gp in value. The Serpent takes these items to the deepest, darkest depths of the Underworld waterways and, well, doesn't come back with them. Who knows where they end up. This journey can take up to a week, but on accepting the gifts, the Serpent is bound to complete the task with the wielder.

Once this has been done with both Serpents, the wielder must then journey with the Serpents, who act as guides and protectors, to a shrine deep below the depths of Serpent lake, along a route which none bar the Lake Serpents and previous wielders of the Tri-Stone know about and all are sworn to protect. How the wielder gets there is up to them, but the Serpents will provide a small piece of an extremely rare Serpent Lake plant which helps deal with the pressure of the depths to which you need to descend.

On reaching the Lake Serpent temple, the ritual proper can start. This may well attract the attention of the eldest of Lake Serpents; these creatures are there to rip apart the wielder if the ritual fails.

A small platform within a bubble of air is the point where the ritual takes place. Firstly, the wielder has to submit to having Harm cast upon them by a Very Old, Elder or Grand Elder Serpent with clerical rather than sorcerous levels. These hit points are used to provide the platform with the energy needed to power the ritual. However, the Harm doesn't drain hit points in exactly the same way as the spell; it leaves the wielder with 1 hp per five levels.

If the wielder is successful at the ritual, their inner energy (even if unconscious) is drawn into one piece of the Tri-Stone. The two bound Serpents willingly expire and their energy goes into the other two pieces. The Tri-Stone then rejoins itself together, rests against the chest of the wielder (whether unconscious or not) and floods the wielder with the contained energy.

This has the effect of taking one third the total bonuses of the two Serpents and allowing the wielder to increase their own ability scores by that number.

In any case, no one ability can increase by more than the wielder's level.

Quite simply, failure at the ritual stage means death. If a wielder fall unconscious without succeeding, the Serpents will not rescue them; in fact, the two bound Serpents split the wielder's essence between them and increase their own power on the spot.

And besides the chance of failing the ritual, there is a percentage chance that the efforts of the wielder just aren't good enough, as per the table below. Failure on this table doesn't kill the wielder; they will be escorted back to their own land by the two bound Serpents, who are freed once this task is completed, and given one hour per level to "escape", because from that moment onwards, every Lake Serpent that exists will try its hardest to kill the unsuccessful wielder. The Tri-Stone itself will disappear.

The Tri-Stone cannot be placed in a bag of holding or any other trans-dimensional space nor can it be removed from this prime material plane. All attempts to do so will fail and the artifact will shock the holder for 20d6 damage and fall to the ground if additional attempts are made.
Destruction

The Tri-Stone may only be destroyed by the combined efforts of a Vikmordere Shaman of level 20+ and an Elder (25+ HD) Water Serpent focusing all magical energy into one massive attack. There is a 30% chance that one of the casters will die when the artifact explodes. There is a 10% chance that both will be killed. In fact, this destruction only really happens at the Tri-Stone's own choice. It will break into a number of pieces equal to half the combined total number of HD of the shaman and the Water Serpent. These pieces will be scattered across the whole of the Prime Plane, with a 5% chance a piece will end up on the Ethereal or Astral Planes (GM's choice). The task of recovering these pieces will be worthy of the greatest of sagas in itself, notwithstanding the purpose of rejoining the Tri-Stone, which will have to be of the greatest importance.