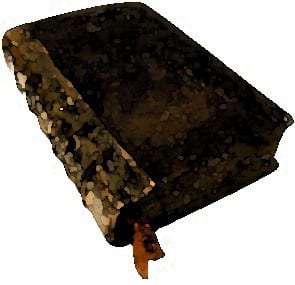 This evil cursed tome was once the religious text of a secret sect of devil worshipers who lived in the mountain lakes region and rejected the teachings of those from the cities. Nabid the Great as his followers called him, and Nabid the Vicious by his enemies was the keeper of the book. Nabid outlived all seven of his wives and all of his children using the evil rituals presented in the tome. No one knows exactly where the tome came from, but most whisper that it was given to Nabid by a great Devil. After living for over 150 years, Nabid finally met his end at the hands of savage barbarians from the far east who came seeking slaves and riches. Nabid did not go down without a fight though and with the power of the tome and his cursed dagger he took down 15 of the barbarians strongest warriors before falling to Nenchett the Axe, a renowned champion amongst the barbarians.

After his defeat over 100 years ago the tome disappeared and was never spoken of again.

The Tome of Nabid contains many evil ritualistic spells and directions for making poisons. Over time the tome takes possession of a person directing them in rituals which will place them in power over those in control.

Once the Tome of Nabid has control over the character they will seek out the Dagger of Nabid at any cost to reunite the two cursed items.

Only a Remove Curse spell cast by a priest of level 10 or higher will remove the infatuation and control over a character cursed by the tome.