A portion of the Vast Swamp is home to a tribe of seemingly savage humans, a clan that are often perceived as little better than primitive hunters—nothing could be further from the truth. While the spreading of technology has been slowed in these marshlands, the culture of the Bloodclaw is one of the most nuanced to be found in all of Aventyr. These demon hunters have resisted the darkness that curses the region and fought against its fiendish inhabitants for time immemorial, refining their societal practices and traditions to weed out the touch of evil before it can corrupt them. Not to be easily undone, malevolent and chaotic outsiders persist and the lives of the Bloodclaw are often consumed with the protection of their homes and kin rather than adventure or study. 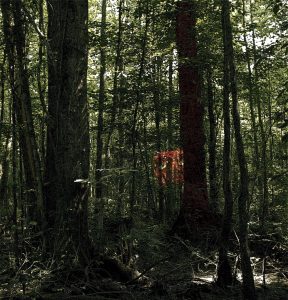 Anyone that manages to reach one of their settlements is heavily scrutinized to ensure they are not demon interlopers, then briefly offered shelter before being asked to leave (though in some cases travelers receive an opportunity to become part of the Bloodclaw tribe).

Abyssal Illusions
Demonic influence seeps throughout the area, present whether a fiendish outsider is nearby or not. Every 1d4 hours a creature travels through Bloodclaw territory there is a 20% chance they encounter an illusion of a demon (as major image, CL 5th; DC 14 Will negates).

Bloodclaw Chants
The spellcasters among the Bloodclaw have passed down all of their magical knowledge from generation to generation and over thousands of years they developed a complex dirge that can drive away or impede demons that might hear it. A DC 18 Perform (singing), Profession (singer), or DC 23 Perception check is required to master the nuanced tonal changes and melody of a Bloodclaw chant, but those who know it avoid singing it whenever a foreigner is nearby (unless they have been accepted into the tribe).

Fiendish Flora
The Bloodclaw Territory and all the areas around the Mud King’s domain are filled with trees infused with fiendish power. Any Good-aligned creature that passes within 100 ft. of one of these plants has a 50% chance of it alerting their presence to any demons within a 1-mile-radius. A DC 20 Bluff check fools a fiendish tree.and a DC 20 Stealth check allows a creature to pass by undetected. Spotting one of these cursed plants requires a DC 22 Perception check (druids, hunters, and rangers receive a +4 bonus to this skill check). Any creature singing a Bloodclaw chant automatically succeeds on both the Bluff and Perception checks associated with fiendish flora.