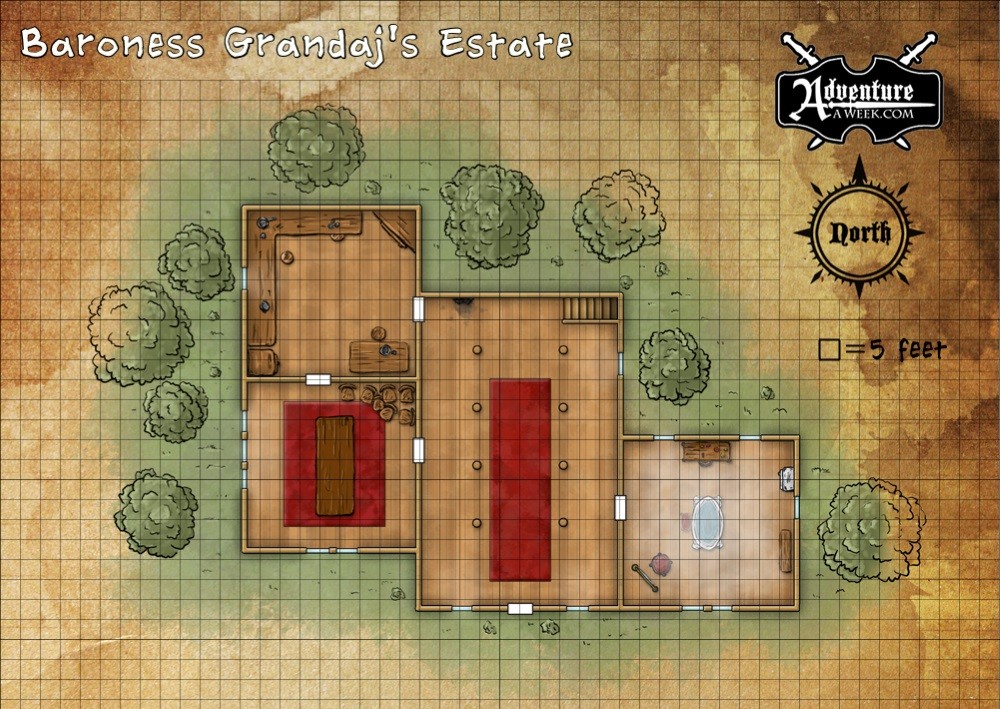 After finally reaching Enixam with the curative from Dockmaster Casta [stay tuned to the next Meta Thursday and Magic Item Monday! -MM] the adventurers may have some time on their hands but are more likely to deliver the concoction to its recipient as quickly as possible. Upon reaching the town the PCs can find the location of Baroness Grandaj’s estate with a DC 12 Diplomacy or Knowledge (local) check. A result of 18 or higher on either of these checks yields more than her location, however; Baroness Grandaj is in fact of noble blood but dubious birth and keen to strike two birds with one stone, the royalty of Mohkba gave her this settlement (a semblance of control) while clearing their own streets of “undesirables” (the disfigured, lepers, and half-breeds).
When the PCs reach Baroness Grandaj’s Estate she is taciturn and rude, only becoming polite and warming once she knows the adventurers have the strange salve in hand. When she opens the door and invites the party inside, read the following:

The door to the front of the baroness’ home is much older than the rest of the structure and though clearly quite sturdy, it shakes jarringly as something is pulled away from the inside before it opens up to reveal the interior. A rich crimson rug sits on the floor with stools on either side, and a deep, pleasant, loud female voice booms, “please come in, come in. I have been expecting you and there are refreshments prepared.” Your host remains hidden behind the door until you walk inside, at which point you find one of the largest and ugliest women you have ever seen—you have to wonder what part of her isn’t human.

She takes no time greeting the guests, merely getting the entire party into her home before shutting the door (hardness 7, 120 hp) and placing a 730 pound (5 inches x 5 inches x 6 feet long) lead bar across it; only a DC 25 Strength check moves it (one PC can provide direct aid to the ability check). Baroness Grandaj leaves the adventurers, disappearing into her bath for 1d4+3 minutes to apply the mixture brought all the way from Drak’kal. 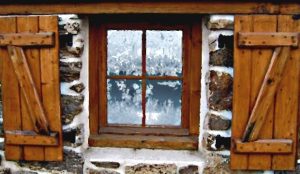 When the party realizes that though the ruler of the settlement has locked them inside and an attempt to breach or tamper with one of the frosted windows is made, the glass gradually cools for 1 round before becoming absolutely frigid, dealing 1d10+2 cold damage to any creature within 5 feet. Creatures that attack the frosted windows (hardness 6, 10 hp) with spells or weapons trigger the same effect, though the instant a frosted window takes damage it becomes covered in an inch of ice (hardness 4, 10 hp).
Exploring the rest of the building, the adventurers find a table in the southwest room resplendent with luxurious foods from across the river; there is a 30% chance it is fresh, but otherwise it is 1d4-1 days (minimum 1) stale. The northwest room has a simple kitchen and the stairs in the main room lead down to a dry storage room.

Whether or not the adventurers reached Enixam before the salve lost its potency is immaterial; she wouldn’t know either way and though at first it seems to work, it isn’t a lasting solution. If the mixture hasn’t expired she bursts from the bathroom with only a towel on, overjoyed, hugging the PCs vigorously. Otherwise, she is extremely angry. Read the following when the curative fails Baroness Grandaj:

A deafening “NOOOOO!” rips from the huge chest of Baroness Grandaj and her enormous bulky form seems to surge as her face melts ever so slightly. “You have failed me like the others and will suffer the same fate!”

Only a DC 28 Diplomacy check keeps the ruler of Enixam from losing her temper and attacking the party, and after 1d4+1 rounds escaping from the building becomes a dangerous prospect. Her scream brings the attention of the settlement’s citizens and they look in from outside, screaming threats at the PCs for what they’ve done and that if Baroness Grandaj is killed, the adventurers are next!
At this point subduing the enraged woman [statblock tomorrow, I swear! -MM] is the only viable option and there are a number of ways to do it; the use of magic is obvious, but as she’s effectively naked even PCs not using weapons that are designed for the task should be able to hit her (even with the -4 penalty to attack rolls for using a lethal weapon to deal nonlethal damage).

After being reduced to near unconsciousness (within 8 hp) Baroness Grandaj relents and calms, apologizing for the outburst and giving the adventurers what bit of the mixture remains [Monday, Monday, Monday! -MM] along with the rest of their payment for delivery: 2,000 gold.