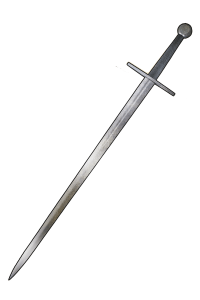 HISTORY
Success on a Knowledge (local) check to learn more about azurewrath reveals some facts about the unique item’s lore:
DC 15     Forged by a master smith over three centuries ago, azurewrath was wielded for many bloody decades by the famed eldritch knight Essima Oakdew. An elven warrior and mage of significant power, this weapon was a tribute to both disciplines as well as homage to the raw power of nature.
DC 20     Essima was known for her hatred of all things unnatural, slaying many minor demons and devils wherever she could. Although her reasoning for undertaking such actions was unfathomable to most, it is said that Essima had lost loved ones during an attack by outsiders on the lands of her home.
DC 25     Fleeing with her life to lusher lands to the southwest, Essima continued to roam as she tracked down and destroyed heretical cults and their allied outsiders. Many were destroyed, although some escaped her wrath through luck, force of arms, or good judgment. One such escapee managed to make good on its threat of revenge, and Essima was found murdered in her bed with an unrecognized yet foul symbol burnt onto her fair features. Her powerful sword was taken, and it is assumed that it has drifted with the murderer into one of the realms of HEL.
DC 30     The inscrutable doings of the Vaporous Veil are whimsical, however, and some have heard stories of azurewrath laying somewhere in the Dar'Spelun Slugmarsh, and such a blade is sure to prove useful in that lethal swamp of the Underworld...

View all posts by Sidslick →