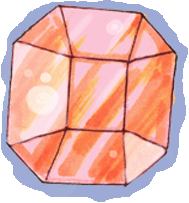 If the crystal is used as part of a power supply for a machine (such as an airship) it gains a minor possession over the machine. At random times in the day the machine that the avaricious xyrx crystal powers does a random act such as flipping over, turning the wrong direction, or trying to overload the device itself. When the avaricious xyrx crystal is in possession of the ship and a creature succeeds against either its control body power or enthrall ability, the cursed item lashes out at that creature, making a improvised attack (+6 melee touch attack, 2d6+2 damage) for 3 rounds before quieting down again. If the avaricious xyrx crystal can't reach the creature, it moves 5 feet towards its target with one of its three rounds of actions.