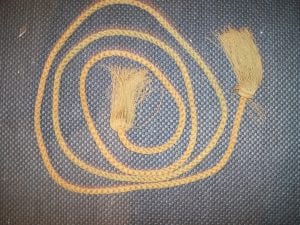 Success on a Knowledge (nobility) check to learn more about the assassin's sash reveals some facts about the unique item’s lore:

DC 15     Uncanny and unexpected, these mischevious ropes have been found in the deaths of countless nobles. Any magical artisans found making an assassin's sash are suspect to intense investigation and, sometimes, a lengthy incarceration.

DC 20     The simple design of the assassin's sash is a bit of a recognition to its original designer. Many say the craftsmen to first create one of these enchanted ropes began their lot as a stage hand or simple orderly of a noble court.

DC 25     Ricka was actually a royal gardener that dabbled in magic. After a nobleman had announced displeasure toward—and sought retribution against—the halfling botanist, the next time he opened his mouth to yell at the hardworking laborer from his bedroom, an assassin's sash came flying through the window. Its creator Ricka left the area not long afterward, and for a time many thought the noble had just slipped and in a bizarre accident, strangled himself to death with a curtain's rope.

DC 30     The assassin's sash quickly earned notice from nobles across the realm and Ricka was forced to flee to other lands as several angry royal families actively sought his head. Thieves, assassins, and adventurers alike all are keen to get their hands on one, but doing so is a difficult thing to do. However, you've heard of one for sale in a nearby town...