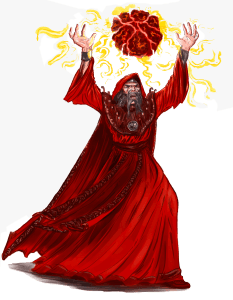 The interdimensional travel of Savithrin has left behind regions in the Disputed Territories where the fabric of space itself is unstable. Arcane energies collect and flow, sometimes resulting in an arcane vortex trap. There are two major types of arcane vortices: rotational and irrotational. Each vortex is also associated with a random school of magic (1d8 - abjuration, conjuration, divination, enchantment, evocation, illusion, necromancy, or transmutation).

Arcane vortex traps spring up randomly and affect a 100-ft.-diameter area, from ground level up to 500 feet in the air. 10% of arcane vortices are universal magic; in the case of an irrotational vortex, they affect all magic and for rotational vortices, effects are shifted to a random spell from a different school.

Irrotational Arcane Vortex
This type suppresses and dispels magic effects from its associated school of magic. Whenever a spell from that school is cast within it, the caster must overcome SR 28 or the spell fizzles. For each magical effect from that school active on on a creature, make a dispel check at +15 vs. the spell effect. (DC 11 + CL of spell).

Rotational Arcane Vortex
This type shifts spells and standing spell effects to a random spell or effect of the same level within the school. Spells cast while in a rotational arcane vortex must overcome SR 28 or turn into a random spell of the same level from the vortex’s school. Standing magical effects are turned into an equivalent penalty, if applicable, or suppressed if a +15 dispel check vs. the spell succeeds.
For example, a +2 deflection bonus to AC becomes a -2 penalty to AC, or summon monster VI becomes acid fog.