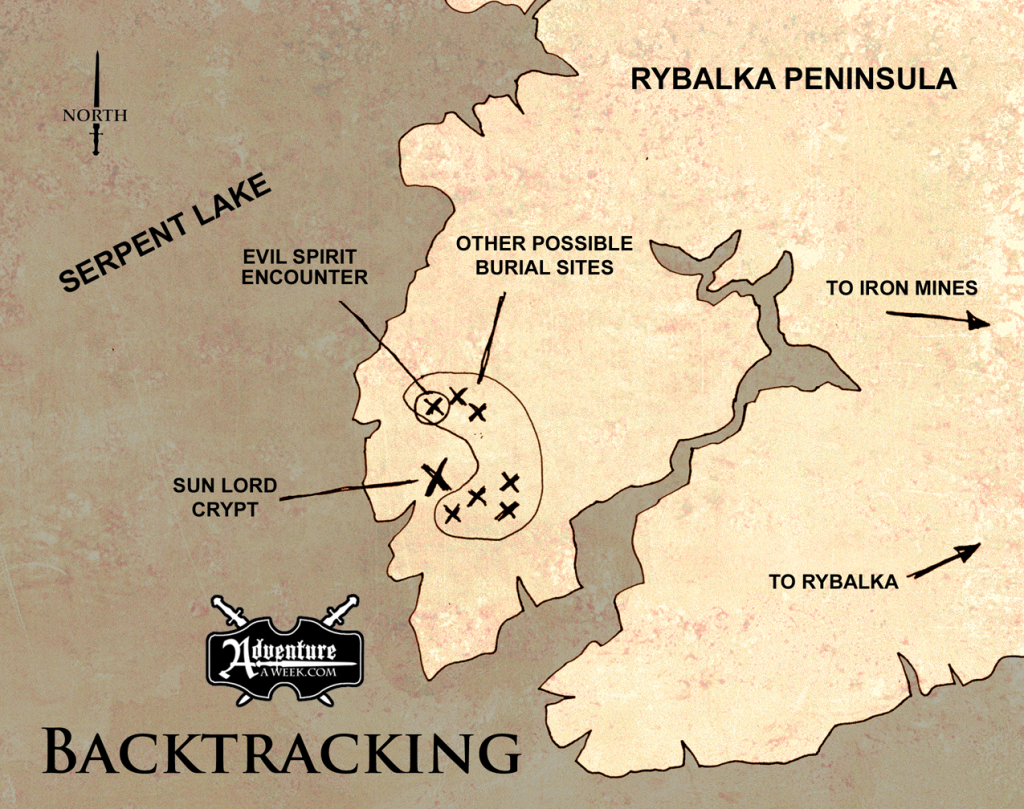 Cost: 100 gold or PCs may move 10 cartloads of mining picks from Quorron's Forge to the cliff face base camp west of the Rybalkan Mine (1 day of heavy labor).

Details: The Ruins of Sun Lord Ka'Teek located west of Rybalka holds a dark secret. A hidden entrance is rumored to be buried in the collapsed rubble outside. The entrance to the ghost crypt passageways is apparently covered by both rubble, overgrown foliage, and snow drifts.

This entrance leads to series of passages which host crypts containing the Sun Lord Ka'Teek's other wives. Apparently the culture of the ancients was polygamous!

The rumor holds that treasure was found there, but a group of curious adventurers was attacked by evil spirits upon entry. The spirits killed everyone in the party save for one man who narrowly escaped but was not able to retrieve any of the treasure. He fled the site by boat and returned to Rybalka where he sold this information to Fin.

Side Quest Ideas: Upon returning to the Crypt of the Sun Lord the PCs realize that the ruins outside are now home to a small contingent totaling 10-30 Orcs 2/3 of which attack the PCs on sight. The entrance to the hidden section of the crypt was recently uncovered by the other 1/3 of the group of the Orcs who at this very instant are digging out some of the rubble looking for treasure. Just as the PCs enter one end of the crypt the digging Orcs break through into a chamber at the other end of the tunnel. Inside this chamber dwells a Gibbering Mouther which begins to attack the Orcs. The Orcs turn to flee, screaming back toward the PCs. As the chaos ensures, one of the Wives of the Sun Lord (now a Ghoul) awakens down another corridor, hungering for the flesh of the living.

There are some other possible burial sites scattered about the exterior of the ruins. It is unknown if these contain the bones of the Sun Lord's wives or are chambers holding treasure.

The evil spirit encounter marked on the map shows the location of an evil ghost named J'Kel who was a servant of Sun Lord Ka'Teek. This man hated serving the Sun Lord in life and was always jealous of the attention Lord Ka'Teek received. If any of the PCs wield the Blade of the Sun Lord he will approach in a hostile manner, yelling at them to leave (in an ancient tongue). If they refuse he will attack the PCs.